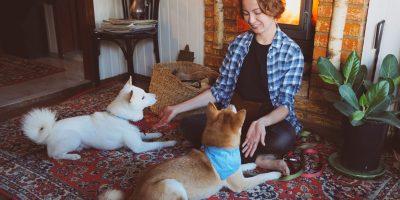 Studies show that dogs understand some words but cannot understand the differences between similar-sounding words. Let’s learn more in the article below.

Do Dogs Hear Words or Sounds?

Dogs have sensitive ears that can hear words as well as sounds. They can differentiate words from gibberish, just like us humans. This is how they can follow voice commands. A study performed at Eötvös Loránd University, Hungary, suggests that dogs do not understand subtle differences in sound.

For example, two words, “treat” and “teeth,” would get the same response from your dog. It doesn’t understand that the speech sound was different in either case. Do dogs understand humans, or is it merely something we as dog owners imagine (and strongly hope for)?

The answer to that question is more complex. Dogs do differentiate words and actions through context. If you train your dog through both actions and words, it will associate the two and might even be able to differentiate that combination if you change the actions.

The same study tells us that dogs have trouble differentiating between similar-sounding words since they don’t pay attention to sounds per se. They understand that the speaker is saying a word, but if two words sound the same, they will react similarly.

In our previous example, the words “treat” and “teeth” would elicit the same response. But the word “take” would not because the sounds are different. Similar sounding words are confusing for dogs.

So, how many words do dogs know?

It means that dogs process words much the same way as a 14-month-old human baby. And just like a 14-month-old baby, they only have a vocabulary of 3-5 words! However, nature is full of mysteries, and there are examples of dogs who can understand hundreds of words; and what’s more surprising is that they weren’t even “command words“!

Command words are easier for dogs since they learn from your actions as much as from the sound of the word, but these dogs are a subject matter of a whole different research study.

Can dogs understand words that they are hearing? Or are they just hearing them and inferring the meaning from context? What would happen if the context was taken out? What would happen if you just said the word “Fetch” but didn’t raise your arm to throw the ball? Two research groups conducted a functional MRI study on dogs to find out.

The study aimed to understand what parts of a dog’s brain react when you talk to them. The researchers also wanted to know whether dogs understood the meaning of the words or were they merely responding to actions and sounds?

The idea was to see if the same areas would light up in a dog’s brain as they do in humans when we hear speech. Here’s what happened.

The first and most challenging step was to get the dogs to lie still while conducting the MRI. If you have ever been under an MRI scanner, the whole thing is claustrophobic, loud, and takes a lot of time. Moreover, you have to lie still. Otherwise, the data collected would be bad.

It’s hard enough for humans, but getting dogs to sit quietly for that long was going to be a challenge. Sedating or restraining the dogs was not an option because that can add stress to the dogs’ brain scans and qualitatively affect the data.

The researchers adopted a method well known to dog owners: they provided dogs with a steady supply of their favorite treats to get them to sit quietly without moving. They tested and trained several dogs and then chose the ones that gave the best results.

Thirteen dogs were selected after this rigorous training in the Budapest study. The dogs were scanned unrestrained and happy inside the MRI scanner.

The researchers used recorded voice commands of a trainer saying either neutral words or words that praised them. Next, they repeated each word in either a neutral voice or a praising tone.

Another research group in Atlanta used MRI scanning 12 dogs to study whether dogs can understand the difference between words and pseudowords (lexical processing). Pseudowords are gibberish words that have syllables that make them sound like an actual word, such as sark (instead of bark) or vun (instead of run)

The response in the left hemisphere of the dog’s brains upon hearing praise words said in a neutral tone made the researchers conclude that dogs understand the meaning of the words. But the tone must match the word meaning for a dog to think he is being praised. If the praise word tone and meaning match, the reward area activates in a dog’s brain.

Unfortunately, an erratum was published six months later, showing that they had mistakenly interchanged the left and right words in the report. It meant that dogs process words differently than humans.

The Atlanta research again showed that dogs’ brains process words differently than humans. When they hear a pseudoword, their brain activity increases compared to when they hear a word they know. It means that dogs show interest in new words, but they also associate words with actions compared to simply learning words.

How Can Owners Communicate Best With Their Dog?

Here’s what the research boils down to if you are trying to communicate better with your dog.

Use Hand Signals or Gestures

Combine a gesture or hand signal with the voice command to communicate best with your dog. Dogs communicate with other dogs using body signals and thus are an expert at reading gestures.

Associating a hand signal or gesture helps when you take your dog to a crowded place where it will have difficulty listening to your voice.

You need to speak less while trying to communicate with your dog. Talking too much or rephrasing the commands will do nothing but confuse the dog even more.

For example, instead of repeating or rephrasing the ‘come’ command to ‘come on’ will not make the dog understand the order better. Instead, you can use treats to help your dog learn.

So, can dogs hear words? Yes, but they can’t differentiate similar sounding words. Studies have shown that dogs do, indeed, hear words and sounds and can understand them if trained. They have trouble understanding the differences between similar-sounding words, but they do listen to you when you speak to them. More importantly, words are not the only way to talk to your dog: just like humans, dogs can pick up easily on non-verbal cues.