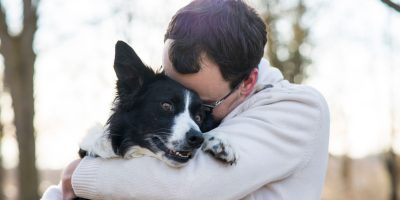 Having pet dogs at home is nothing new to people. In a 2021-2022 survey, around 69 million households in the United States own at least one dog, making this animal the most widely known pet. People have become familiar with having one, but what do dogs think of humans?

Do Dogs See Us As Parents?

According to research led by Lisa Horn, pet dogs have become closely affiliated with people for over 15,000 years. Several studies show that dogs usually love people more than other dogs, and they see their owners as their families. They often rely on humans for protection, affection, and everything they need every day.

Dogs have adapted to how people live. They develop a special relationship with their owners, similar to how children and parents bond with each other. An aspect of their connection is the “secure base effect.” This concept is also present in parent-child relationships.

Lisa Horn from Vetmeduni’s Messerli Research Institute examined pups’ reactions under three conditions: silent owner, absent owner, and encouraging owner. She found that dogs can be less enthusiastic about getting food rewards from strangers or when their owners are not around. Moreover, they will not become motivated when you remain silent and do not encourage them to get treats from you.

Dogs only feel happy and eager when they are with their owners and when you boost their energy to interact with you. They tend to feel more attached to their owners. In this case, they also get separation anxiety, like how people feel sad whenever they need to go away from their families.

What Do Scientists Say?

Many researchers, scientists, and experts have undergone various studies to find concrete answers to “how do dogs see us” and “what do dogs see us as.” Fortunately, some of them succeeded and managed to provide information.

First, the Animal Cognition Scientists from Emory University conducted a neuroimaging study to measure dogs’ natural responses to different smells of familiar and unknown people and dogs. Their study signifies that only the dog owner’s scent activates the dog’s caudate nucleus or the reward center of the pup’s brain. It further shows that dogs prioritize and recognize their owners’ smell over other scents.

On the other hand, a study from Eotvos Lorand University in Budapest examined the canine brain activity relating to human and dog sounds. They prepared different voices, barks, sighs, grunts, and other noises from various people and pups. As they went through their research analysis, they found that the way humans and dogs process vocal sounds is similar.

For instance, joyful sounds light up humans’ and dogs’ auditory cortex. It indicates that there might be a deep communication system in the owner-pet bond due for this reason.

If you ever think, “do dogs think we are their parents,” Attila Andics, a neuroscientist, stated that dogs usually interact with their owners similar to how babies do with their parents. They often run to their owners whenever they feel scared or worried because they feel safe and protected. He also added that canines are the only non-primate animals seeking eye contact from people.

Indeed, dogs consider people as their family. However, a study conducted by Massachusetts General Hospital Research also proved that dogs make people happy. In their research, they prepared photos of dogs and children to measure the human brain activity in mothers. They showed the images to moms and concluded that both photos activated brain regions relating to emotions, affiliation, reward, social interaction, and visual processing.

People can help their dogs recognize their owners in two different ways. The first one is about the dog’s nature, and the other is about the owner’s nurturing. Read ahead to know the difference between the two.

Generally, dogs look more to humans than they do to other dogs. They often recognize their owners through domestication and spending time with them. In essence, they are naturally dependent on humans.

Dogs also have a natural ability to memorize their owners. In a research from the University of Mexico, the dogs’ brains light up upon seeing their owners’ photos. This study also explained that pups could remember their owners’ facial expressions, body language, gestures, smell, voice, and everything connected to their identity.

A team of scientists from Oregon State University also researched wolves and dogs relating to their genetics. It showed that only the dogs became besotted with people because they have genes similar to William syndrome, a developmental disorder making people over-friendly. In conclusion, dogs naturally like befriending people, and they will recognize them once they become close.

In this case, owners can guarantee that their dogs will recognize them as time passes.

Aside from the dog’s nature, its environment also affects its behavior and recognition of its owners. The way owners behave and treat these pets also affects their dogs’ perception of things. Your actions can significantly motivate or encourage your pup to act correctly or wrongfully.

A dog’s owner can have the ability to shape a pet’s attitude. You can teach it, and it will teach you how to interact with other people. It can also know how to eat, manipulate objects, and how everything works inside your household.

In this case, you can build a positive relationship with your dog to let it recognize you over time. Since these pets can remember and adapt to things, you can train and socialize with them to develop a stronger, healthier bond between your pets and yourself. Eventually, they can continue recognizing you as their owner once they get used to your identity and presence.

How Do Dogs Recognize Their Owners?

Dogs have different means of recognizing their owners, such as their voice, smell, and face. Continue reading to understand each.

Dogs can usually recognize people through their words and voices. They can also differentiate various pitches, timbres, noisiness, and other sound qualities.

Researchers at Eotvos Lorand University in Budapest conducted a study and proved this theory. They invited 28 dogs, their owners, and unknown strangers. They played hide and seek to see if the dogs could find their owners by listening to their voices.

At the end of the research, 82% of the dogs succeeded in doing the task. Even though they did not use their sense of smell, they still recognized who their owners were among everyone inside the place.

It is very prevalent for people to know that dogs usually have a strong sense of smell. We can see various dogs in the streets or households smelling themselves to recognize one another. Furthermore, we can see trained canines using this sensory to find things, dead bodies, drugs, and the like.

Indeed, dogs’ expertise is telling people apart by smelling. They can sniff different scents from miles away. They can also remember their owner’s smell even if they are not around. This ability is because of the 300 million olfactory receptors dogs have, 50 times more than people usually possess.

Dogs are also excellent at using their sense of sight. They can read and memorize human behavior, expressions, body language, and faces by looking at their owners.

In 2010, Paolo Mongillo from the University of Padua experimented on whether dogs can tell their owners apart from many strangers. He placed the dogs in a room where their owners and random people would enter and exit the place.

Mongillo concluded that dogs could select or pick their owners from a crowd by recognizing them. They also tend to pay more attention to their owners than strangers. However, they could not tell their owners apart with masks on.

You will no longer need to question yourself about your dogs seeing you as a family member or seeing you as parents because the answer is yes! Dogs recognize their owners easily, and they love people more than other dogs. After all, pet dogs will always be humans’ best friends.