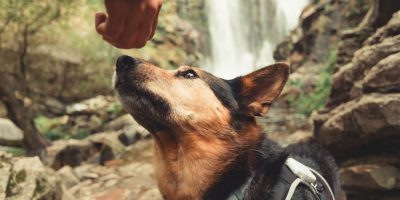 Is there a reason that you ask why dogs smell your private parts? That question will likely pop up in your mind when you suddenly experience that awkward moment when a dog zooms in on your lady or man parts.

That is quite a common occurrence if you have a pet dog. However, it will probably catch you by surprise if you don’t and you happen to visit a friend who does. Whether it’s your dog or someone else’s, it is still an embarrassing situation to be in. Additionally, it raises the question of why are dogs sniffing your crotch.

Why Do Dogs Smell Your Private Parts

Have you been subjected to a crotch sniff by a dog? What does it mean when a dog sniffs you in your private areas? It’s embarrassing and might give off the wrong impression. Though, before you jump to the worst conclusion, know there are several reasons why they do it.

A Way to Say Hello

Smelling a human’s private part is a big way to say hello in dog language. Since smelling butts are dogs’ way of greeting each other, it is not a far stretch to think that this behavior also extends to their human friends.

It is their way of saying, “Hello, I would like to get to know you.” It is the most mannerly way of requesting a deeper relationship with a human.

If you have a dog as a pet, you would have noticed how they sniff other dogs’ bums. These furry animals routinely inspect the crotch and rectal areas of other dogs they come in close contact with, primarily to gather information.

Dogs have scent glands near the rectum that communicate several tidbits, including a dog’s sex, age, mating status, and more. Don’t be surprised that they do the same to humans.

A sniff near a person’s crotch can also tell dogs a lot about them. Due to the chemical compounds the body emits, someone’s scent can tell a dog their age, mood, gender, and more. It is their way of doing a ‘background check’ on a human they interact with.

One of the main answers to the question of why do dogs sniff human bottoms and private parts is olfactory overload. Dogs have an incredibly keen sense of smell. Their noses are leagues better and far more sensitive than humans, so they will follow their noses wherever it takes them.

Sometimes, it can lead to the more odorous areas of the human body. However, please do not misinterpret or take it the wrong way. It is only normal for dogs to gravitate towards a person’s crotch region since it is an area that gives off strong signals.

A more interesting fact — did you know that dogs can detect certain types of cancer? Dogs can detect ovarian cancer from blood samples and prostate cancer from smelling someone’s urine. Also, according to a study published in the National Library of Medicine, a trained dog can detect lung cancer from a person’s breath.

Crotch sniffing is part of a dog’s natural instinct. It is almost second nature to them to sniff the private areas of each other and every other species they encounter. They do so not just to greet them, but also to uncover information.

When someone new enters your home, your dog’s instinct will tell them to sniff them out. It is how they will familiarize themselves with the unknown.

Picking Up on Pheromones

Even though humans can’t detect each other’s pheromones, that does not mean we don’t emit them. Humans have what you call apocrine glands — a type of exocrine gland that secrete all sorts of pheromones.

Your pheromones are most potent if you are on your period or have had recent sexual intercourse. You may be able to fool your household, but there is no sneaking past your dog’s incredible sense of smell!

Is It Normal for Dogs to Sniff a Person's Crotch?

If you are wondering why do dogs sniff human private areas, you will probably want to know if it’s normal dog behavior or not.

When dogs sniff human crotches, they use their keenest sense to gather and collect as much information as possible about a potential new friend. Dogs have an almost superpower-level sense of smell. It explains why it is normal for them to want an extra-close sniff of someone’s nether regions.

A canine possesses more than 100 million olfactory receptors on its nose, as opposed to the 5-6 million receptors humans have. It means a dog’s brain is devoted to analyzing scents 40 times greater than humans.

Dogs crotch-sniffing humans can be compared to dogs sniffing other dogs’ butts. They do so to collect information about the other dog.

The scent they smell from another dog’s rear end can tell them about their gender, health status, reproductive status, diet, temperament, and more! A dog can also remember scents; therefore, it can determine if they met the other dog before.

What Can a Dog Sense From Smelling Your Crotch?

Some crotches are more likely to catch the attention of a dog’s curious nose:

These will most likely pique a dog’s interest. They excrete higher levels of pheromones than other body parts, and dogs can smell these pheromones.

It won’t matter even if a dog is highly familiar with its owner. They will let off a different scent if they are currently on their period or had recently given birth. Their furry pet will undoubtedly want to know why — hence, the crotch sniffing.

How to Stop a Dog From Sniffing Private Areas

Now that you know the answer to why dogs smell your crotch, it is time to understand how to stop it.

A little crotch sniffing is not that big of a deal. You can regard it simply as your dog doing what dogs do. Yet, some dogs might be more interested in doing this than others — sometimes crossing the line between what is acceptable and not, especially if you have guests.

If that were the case, you need to devise something to stop this behavior. Here are a few tips you can follow that might be able to help stop your dogs from sniffing your private areas.

An excellent way to stop them from going for your private parts is by giving them something else to sniff. Dogs are easily distracted, so if you offer your hand first, they will be too distracted to aim straight for your goodies.

Tell your guests to do the same if they visit, but please make sure that your dog is not aggressive for this to work.

Channel Your Dog's Sense of Smell

There are specific ways to channel your pet’s sense of smell into fun activities. You can try scent work — a sport that enables your dog to work and harness their sense of smell to recognize odors using the same approach as detection dogs.

Dogs are food-driven creatures, meaning they are always hungry. You can use this fact to your advantage — teach them commands and build a strong history of rewards associated with these behaviors.

Teach them to sit or stay by order and give them treats as rewards. You can use these commands in scenarios when you notice that they are about to sniff your crotch.

If your dog treats crotch-sniffing as a job, you can perform obedience work to teach them some boundaries. For example, keep them on a leash whenever guests arrive at your home and tell your pet to hold down, sit, or stay until you release them.

Reward Your Dog After Obeying

One good way to encourage your pets to follow and obey your commands is by giving them positive rewards. You can give them their favorite treats or toys. You may also take them on a walk or play with them as a reward.

Why do dogs sniff your crotch? That is a question that many pet owners are actively searching for an answer to.

There are many reasons why they do so. Though, it all comes down to gathering information and following natural instincts. Your furry pet’s heightened sense of smell helps them navigate their everyday lives.