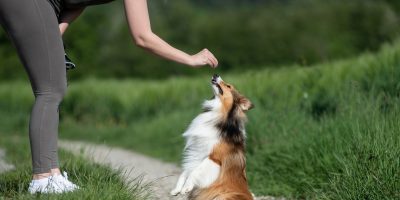 Continual & terminal markers for dog training are a point for discussion among many trainers. Marker training for dogs makes use of words or sounds to signal to your dog when they have done something right. The marker “marks” a specific moment when your dog performs the behavior you want to see. It’s feedback for your dog that makes them feel more confident and helps to shape new behaviors.

Markers for dog training are a form of classical conditioning. By charging a marker word or sound, you are teaching your dog to associate the word with a reward. This reward could be food or a toy, depending on what works best for your pooch. Ready to find out more about continual & terminal markers for dog training? Read on with us!

What are Dog Training Markers

In dog training, a marker is a word or sound that communicates or signals to a dog that they are doing something correctly or incorrectly. These words or sounds mark a specific action that the dog is carrying out. In essence, it’s feedback, in its most simple form. Clear verbal marker words clear up and benefit communication and streamline the entire training process.

Your marker words should have some specific characteristics. The word should be short and sharp, making it easy to understand. It should come naturally to you, but should not be commonly used in conversations around your dog. This means that the word must not be a word that you use every day because the word loses its importance and effect. Make sure that your word is unique, too. It cannot sound like your dog’s name or any other commands that they already know. And, if you were wondering, clicker training is a form of marker training!

In short, a continuation marker tells your dog to keep doing what they are doing for a reward. This type of marker is extremely useful for extended behaviors, such as down-stays, eye contact, and heelwork. Many trainers use the word “good” as their continuation marker, to let their dog know that they are doing the behavior right, but must continue to receive the reward. This marker is a positive one, so it’s important to pair the marker with a positive attitude.

When using a continuation marker, it’s essential to not grant the reward after using it, as this defeats the purpose of the continuation marker. So, by using this marker, you are telling your dog to stay where they are, to continue walking by your side, or to keep running back to you. Overall, if the continuation is unclear to your dog, they will assume that they have accomplished the desired behavior and will break it before you can use the release/terminal marker.

Your negative marker is conditioned during the training process and not separately. This marker tells your dog that they have broken out of the command or are performing the wrong behavior. Many owners use the word “no” as their negative marker – short and easy to understand. However, on its own, this word has no meaning to your dog. You must pair this marker with a consequence for it to have any meaning. This consequence should not be something that is uncomfortable or scary for your dog! For instance, it could be the removal of the treat or withdrawing play, signaling that they have not earned the reward. Now, they must re-do the behavior correctly to get their high-value reward. This teaches your dog that, when they hear the negative marker, they do not get the reward, and have to repeat the behavior.

Never physically punish your dog for not following your commands. A negative marker cannot be something that frightens or harms your dog.

The terminal marker is extremely important for marker training. Words like “yes”, “free”, or “release” are common terminal markers for dogs! These markers signal to your dog that they have performed the behavior you want. You must always reinforce this marker with a reward. Some trainers end their training session with the “free” marker, followed by encouraging their dog to switch off. This creates a dog who understands when they are done working, reducing any anxiety or stress and increasing communication between dog and trainer. To maintain this relationship, it’s extremely important to reward the dog right after the marker is given, even if the marker was said by accident or too early. The marker must have a clear meaning so that the dog is not frustrated.

A common mistake that owners make is layering their terminal marker. This refers to giving the marker and the reward at the same time. Mark the desired behavior, then follow through a few seconds later with the reward or correction. Classical conditioning requires one thing to happen first, then the next, and not both at the same time. So, don’t get too eager to reward your dog, as much as you may want to!

Classical conditioning is a type of learning wherein a stimulus is paired with a previously neutral stimulus. Through this pairing, the previously neutral stimulus starts to elicit a response. During the 1890s, Russian physiologist Pavlov researched salivation in dogs. He measured the saliva of dogs when they were fed using a powder made from meat. Pavlov theorized that the dogs would salivate in response to food being placed in front of them. However, what he saw was that the dogs would salivate when they heard the footsteps of his assistant who brought them the food. Pavlov figured that the dogs could associate an object or event with food, triggering a response.

Later on, Pavlov used a metronome as a neutral stimulus. On its own, the metronome did not elicit any response from his dogs. So, he began to condition the dogs by introducing the metronome before feeding his dogs. After a number of repeats, the procedure had the same result – the dogs salivated upon the introduction of the metronome. Because this response was learned, it became known as a “conditioned” response. Pavlov made several more discoveries about conditioning; for example, he found that dogs learned fastest when the interval between the neutral stimulus and the appearance of the unconditioned stimulus was shortest.

The use of marker words in dog training is a form of classical conditioning. This is because your dog learns to pair the neutral stimulus, or marker, with the reward. Because of this, it’s very important to follow through with your markers. Even if you give the terminal marker by accident or too early, you must reward your dog for following the command.

How To Train Dogs With Markers

Repetition is key for getting your marker words to work! First, you must charge your marker word. Say the word, then immediately give a treat right after. Repeat when your dog is laying down, sitting, chasing looking the other way, and when they least expect it. No matter what your dog is doing, they should look to you for the treat. You are done when you give the word and see your dog respond right away, before being given the reward. The idea is for your dog to associate the word with their reward. Once this association is made, you can use the word to mark when your dog performs the behaviors you want. Be sure to mark the exact moment that your dog performs the behavior so that they learn that the behavior results in the reward.

Have any more questions about continual & terminal markers for dog training? Feel free to check our Frequently Asked Questions for more details. If in doubt about your dog’s training regime, you can always speak to a trainer or dog behaviorist for advice!

How effective is marker-based dog training?

Marker-based training is effective for most dogs! In fact, marker training inspires confidence in both the dog and the trainer when done consistently. Your dog knows when they’re performing as you want them to, and they know that they will get a reward for following your commands. It also reduces confusion and frustration for your dog as they will know the exact moment that they have performed the desired behavior correctly. For the trainer, it provides a great route for communication with their dog, enabling them to shape new behaviors effectively.

Why do we need multiple markers for training dogs?

Can I use any sound as a marker?

Not just any sound can be a marker. An effective marker must be easy to understand, short, and accessible to you at all times. This could be a word like “good”, or “yes.” The word should not be commonly spoken around your dog, as it could lose its meaning. It must also not sound like your dog’s name, or any other commands that they already know. A clicker counts as a marker sound, but you may not have your clicker with you when you need it. So, be sure to have a sound that is always accessible to you. This is important for consistency.

Should I always associate food with the markers?

Not all dogs are food-motivated, so in place of food, another reward must be given after the marker. Giving your dog attention is a great way to reinforce behaviors. Dogs love praise, eye contact, and having you talk to them. Just be sure to withhold touch and attention when your dog does not perform the behavior you need – we often touch our dogs to get them to stop undesirable behaviors like jumping up at people, but to the dog, this is attention, precisely what they want. Play is another key reward for dogs who are not food motivated. You can use toys to motivate your pup instead of food.

What are some good marker words for dog training?

Examples of effective word markers include “yes”, “good”, and “excellent.” However, there are a couple of things to keep in mind when using these words. Do you often use them when talking to your dog in general? Can you give the word consistently, and stick to it? If you are using a single word, you must be very consistent with how and when you deliver it. This means that you can’t switch from “yes” to “good dog” when training your dog to associate the marker with their reward.

Continual & terminal markers for dog training are extremely handy for owners and trainers alike. A marker must be simple, short, and easy to understand. You must be very consistent with your use of the marker sound or word to avoid confusing or frustrating your dog. You must load your markers so that your dog knows they will get a reward upon being given the marker, though. This takes time and patience.