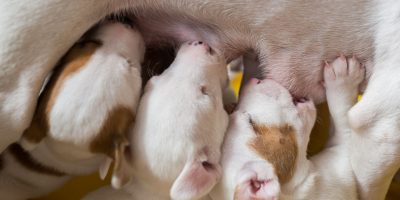 As a beginner dog breeder, you may be wondering about inducing dog labor. Is it possible? Does it work in the same way that it does for humans? And is it safe and effective for dogs? In short, while it may be possible to induce labor in dogs, it is not always the recommended option for them.

Dog labor induction usually involves veterinary drugs. To date, there are few drugs that can be given to induce labor in dogs. However, drugs like oxytocin and progesterone blockers appear to be the most promising options for bitches. To find out more about dog labor induction, read on with us!

What is Induction of Labor

Labor induction is the process of stimulating birth. This involves either non-pharmaceutical or pharmaceutical methods, depending on what is best for the situation at hand. In humans, about one-quarter of pregnant people in Western countries have their labor medically induced.

The most common medical reasons for inducing labor in humans include post-term pregnancies, fetal death, a previous history of stillbirth, and when there are health risks to the person in continuing the pregnancy. Although this process is highly efficient and well-understood in human medicine, the same cannot be said for our companion animals.

While vets are occasionally asked to induce labor in dogs, it is not commonly done. Induction of labor in dogs should not be attempted for convenience alone. Firstly, the endocrinology of whelping is not fully understood and few methods are shown to be safe for dogs.

Secondly, puppies born from induced labor may be at risk of getting respiratory distress syndrome, leading to a high risk of death. Lastly, many drugs and protocols used to end a pregnancy in dogs may be used to induce labor but are not safe in preserving the lives of the puppies.

How to Induce Labor in Dogs

Because the triggering mechanism for labor in dogs is not well understood, it is difficult to develop and select drugs that are completely safe for pregnant dogs. Ideally, a drug for inducing canine labor should induce whelping efficiently and within a predictable and short time frame after the treatment.

It should also induce a normal birth and should not come with harmful side effects. Unfortunately, several attempts at developing drugs in the past have led to pyometra and ruptured uteruses in dogs.

A case report from 2012 describes the first “safe, fast, and successful” induction of labor in a dog. The bitch in the case report was 3.5 years old and weighed 25kg, with no notable medical or surgical history. First, the bitch was sedated with an intravenous drip of xylazine.

An endoscopic examination of the cervix was then done after using nitroglycerine to confirm that the cervix was dilated. Once this was confirmed, oxytocin was injected in three doses 10 minutes apart. The bitch became restless, went off her food, and panted incessantly.

Straining then began two hours later. She gave birth three hours after the treatment and after one week she and her litter were in good health.

A study done in 2000 investigated the potential for using sodium cloprostenol to induce labor in dogs. To begin, non-pregnant Greyhounds were given sodium cloprostenol for 7 days. The dogs who got the higher doses exhibited more polydipsia (increased thirst) than those with lower doses.

In the second part of the experiment, pregnant dogs received the same treatment. Interestingly, giving these dogs sodium cloprostenol did induce labor, and the first puppy was born 2.9 hours after treatment. The study quotes that the “puppy survival rate was 6.0 +/- 0.8 per litter (range 4 to 9 pups).”

It was concluded that sodium cloprostenol given at a continuous low dose was effective at inducing labor in dogs during late pregnancy.

A study from 2004 looks at using the progesterone-receptor blocker aglepristone. For this study, six Beagles received aglepristone treatment at nine-hour intervals on day 58 of pregnancy. The first puppy was born between 32 and 56 hours of the treatment, meaning that the gestation time was shortened.

However, the study claims that treatment did not significantly influence puppy survival rates or birth weights, thus suggesting that this drug could be effective at inducing labor in dogs. However, this drug is not without its risks.

It was specifically made to be an abortifacient in pregnant animals. It also interacts with several other drugs, including ketoconazole and itraconazole. Lastly, it reduces the effectiveness of glucocorticoid treatment.

A study from 1999 looked at using fenprostalene to induce labor in dogs. This experiment involved 16 Beagles in their 56th to 58th days of pregnancy. Fenprostalene is a long-acting prostaglandin analog and was given alongside prifinium bromide, a nerve-blocking agent. Dogs will receive the drug twice.

After the fenprostalene injection without prifinium bromide, side effects such as vomiting, diarrhea, and salivation occurred. When prifinium bromide was given alongside the other drug, no side effects were seen apart from colic symptoms. The one-week survival rate of puppies was highest for dogs who received both drugs.

The precise mechanisms behind dog labor are not fully understood yet. So, inducing labor in dogs always comes with some level of risk. As such, your vet may recommend other avenues of treatment before resorting to inducing labor.

If it is not safe for your bitch to continue her pregnancy, your vet may suggest aborting the pregnancy. Alizin is a drug that can cause abortion in pregnant dogs. It is most effective when given prior to day 35 after the mating, as the fetuses will not have developed bones yet.

Bitches given the drug later than 45 days may still abort their pups. Some side effects of this treatment include lack of appetite, excitement, vomiting, diarrhea, and depression. In rare cases, about 3% of the time, dogs may suffer from pyometra after treatment.

Have any more questions or concerns about inducing dog labor? Feel free to check out our Frequently Asked Questions section for more details. If in doubt about your dog’s pregnancy, always ask your vet for advice.

Can my dog give birth at home?

Many dogs give birth safely at home. However, it’s vital to have a vet who you can call if something goes wrong. At home, you will need to prepare in advance for your litter’s arrival. First, set aside a specific place for your dam to give birth. You must be sure that this place is comfortable, safe, and warm. This will reduce your bitch’s stress and keep her and her puppies safe.

The whelping area must be easy to clean and easy to access in case of emergency. It should also be a suitable size for your breed and the litter size. You’ll also need to cover the base of the whelping box with materials that keep in the heat, like towels or newspapers.

Lastly, the birthing area must be hygienic. This means you must limit how many people can go into the whelping area, as well as clean it frequently. You’ll also want it to be in a well-aired location that is not too stuffy or draughty.

How do I know if my dog is having trouble giving birth?

When more than four hours pass between delivery of puppies, or she produces green/black discharge for more than three hours without delivering a puppy, call your vet. A retained puppy at the vulva, bloody discharge from the vulva, or a lot of discharge are also emergencies. If you spot any of these signs of dystocia, call an emergency vet as soon as possible!

How long can a dog be in labor before giving birth?

The first stage of labor typically lasts for 6 to 12 hours. In this stage, your bitch will be restless and anxious. She might pace, refuse food, vomit, and pant excessively. By the end of stage one, her cervix will completely dilate, at which point stage two begins.

Stage two involves the birth of the puppies. This is where contractions begin and your bitch will strain. The first puppy should arrive within 1 to 2 hours of the onset of contractions.

How can I force my dog into labor?

If your dog is having difficulty with her pregnancy, take her to the vet right away. It’s safest if a vet supervises your dog’s labor if it must be induced. Attempts to induce labor without supervision can lead to devastating consequences for your bitch and her litter. So, always go to a vet if you are considering inducing dog labor.

How do you know when the last puppy is born?

One of the best ways to know when your dog is done whelping is to have a puppy count X-ray done a few days before the birth. This way, you can count the number of puppies as she gives birth to each one. Apart from this, monitoring your bitch closely is important.

Your bitch may enter a resting period between giving birth to each puppy. This can last for up to four hours. If she stops having contractions after four hours, it’s likely that she has no more puppies. If you have any concerns about your dog’s birthing process always talk to your vet.

Only licensed professional vets should induce dog labor. This is for the safety of both your bitch and her puppies. If you feel that your dog is struggling with her pregnancy, always talk to a vet.