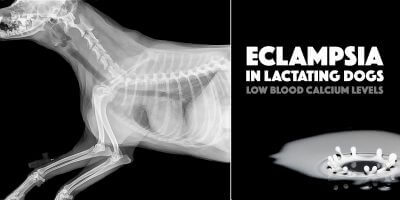 Eclampsia, familiarly known as ‘milk fever’ or ‘puerperal hypocalcemia’ as its technical term, is a life-threatening disease of nursing bitches. The disease is caused by a range of conditions. These include poor nutrition, excessive calcium supplementation, and excessive demand for calcium during lactation. Because of this, it is most common when the bitch’s litter is one to four weeks of age and demanding the most milk.

Dogs with an underactive parathyroid gland are also susceptible to this disease. This is because this gland is responsible for regulating calcium storage in the bones. When the mother starts lactating, the demand for calcium increases. The parathyroid gland, in turn, is unable to fill these needs for the body. So, without treatment, an underactive thyroid can go on to cause eclampsia in the nursing bitch.

Signs and Symptoms of Eclampsia

Here are some symptoms to watch out for:

There is a misconception that pregnant bitches should be given calcium supplements during pregnancy to prevent eclampsia. In fact, oral calcium supplementation increases the risk of eclampsia in the pregnant bitch. Studies show that unnecessary calcium supplementation induces dystocia, eclampsia, soft tissue calcification, and gastric dilation in newborn puppies. This is because excessive calcium intake suppresses parathyroid hormone production, causing downregulation of the calcium regulatory system. So, when your bitch’s calcium demand is highest, typically when her puppies are one to four weeks old, clinical hypocalcemia can occur.

Most significantly, poor nutrition during pregnancy puts the mother at a high risk of developing this disease and leads to birthing or nursing issues. Your pregnant bitch should receive a complete and balanced diet formulated for growth and development, especially during her third trimester. Multiple small meals spread throughout the day will also help the bitch to maintain optimum nutrient and calorie intake. Never feed the pregnant bitch puppy food made for large breed puppies, as this food does not contain the correct calcium-to-phosphorus ratio to support milk production or puppy growth.

Small breeds with large litters are highly susceptible to eclampsia. This is because of the heavy demand for calcium during lactation. As a result of this demand, some small bitches struggle with hypocalcemia as they nurse their puppies. First-time mothers of any breed are also at risk. This is because first-time mothers may find caring for their new litter stressful, causing them to lose their appetite. This, in turn, causes an inadequate intake of calcium. Close supervision of the first-time mother is essential to prevent problems such as this.

Diagnosis of Eclampsia in Dogs

It is crucial for dog owners to monitor the new mother’s behavior in the first few weeks after giving birth. Initially, the signs and symptoms seem subtle without any cause for concern. However, if you notice the mother being restless or moving stiffly, you must contact your veterinarian to rule out any other possible serious problems or to stop the disease from progressing. Signs such as panting and restlessness may eventually progress to spasms throughout the body or convulsion. Some nursing dogs at this stage may get aggressive or disoriented with high fever; some may also neglect their whelps so you would be required to step in to rear the litter of puppies.

Of course, prevention is better than cure. You want to monitor the dog’s health before the onset of the disease. This is why pregnancy supplements together with a healthy diet should be a priority even at the early stages of conception. This also means you have to take note of your dog’s health history leading to the first signs of symptoms if they do develop. You also want to discuss in detail with your veterinarian about the health supplements and the diet you have given your dog before the signs start to occur.

An accurate diagnosis will depend on your account of the dog’s health history. Standard tests including electrolyte panel, complete blood count, and chemical blood profile should be expected as well. The electrolyte panel will verify the total serum calcium in the blood. Concentration of below 7mg/dL confirms a dog’s eclampsia.

Aside from low levels of calcium, most dogs may also suffer from low magnesium and sugar levels in the blood. Your veterinarian may also provide your dog with adequate supplementation to make up for these deficiencies. As much as possible, you want the disease to be evaluated and diagnosed as early as possible. Early detection and diagnosis may spell the difference between life and death for your dog.

Eclampsia is a serious disease that should not be taken lightly. It is potentially life-threatening, but if detected early enough, it can be treated easily. Your dog’s health will stabilize sooner if the treatments are administered as soon as the onset of symptoms appears. Treatment may become complicated the longer you let the symptoms fester. Thus, different cases may require different treatment from the veterinarian.

If the dog, for example, has a high fever, a fan and a cool water soak may be given to normalize the body’s temperature. Intravenous calcium will also be administered for as long as your dog’s calcium levels have reached a safe amount. At the same time, the dog’s calcium levels will be monitored after the calcium intravenous administration to ensure her body, on its own, is able to maintain the calcium levels it needs. Again, the treatment will depend on how complicated the situation has become. This is why early diagnosis is ideal.

Another part of the treatment process is to stop the dog from nursing. This means the puppies have to be taken away from the mother and be hand fed until the mother’s calcium levels have stabilized. In some cases, dog owners opt to hand feed the puppies until they are able to eat solid food.

If, however, you opt to allow the puppies to continue being nursed, you need to have constant checks with your veterinarian to ensure the dog’s calcium levels remain stable. After some time, some mothers are able to independently produce calcium, while others have to be given supplements for a longer period of time.

The main point of the treatment is to ensure the dog’s calcium levels remain stable until she is capable of producing the element herself. Until then, she needs to get supplementation, orally or intravenously, to avoid the symptoms and the life-threatening issues from recurring. Do not administer supplements without the direction of your vet.

As the dog owner, you need to make the decision especially if the puppies are still dependent on their mother’s milk. At the same time, you also want to regulate calcium supplement intake because excessive calcium in the body may have an adverse effect on your dog’s health as well.

Take note that calcium supplementation is not advisable for pregnant dogs. Proceed with caution, or always seek advice from the veterinarian before you administer any supplements into your dog’s diet. At the same time, make sure you keep your dog away from high-phytate foods. This includes wheat germ, wheat bran, soybean, barley, and rice. These foods interfere with calcium absorption in the body. Thus, you want to keep your dog away from it as much as you can.