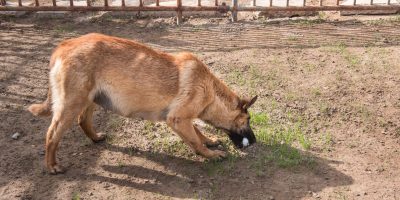 From birthing problems to anxiety during the mating process, your role is to keep your bitch healthy and safe through the entire breeding process. As such, knowledge of female dog breeding problems is not only important for you but essential for your bitch. There can be no compromise on your knowledge of the subject to be a responsible, ethical breeder! To find out more, read on with us.

Abnormal cycling is the term for when your bitch’s heat cycles don’t come on normally. These abnormalities include irregular cycles, absent cycles, split cycles, and delayed cycles. Irregular cycles such as these can come on due to malnutrition, genetic disorders, infections, and hormonal imbalances. But what does each type of abnormal cycle entail?

For starters, a silent heat happens when your bitch shows no obvious signs of being in heat. During a silent heat, your bitch can still get pregnant, and male dogs will be attracted to her. Your vet can confirm a silent heat with a quick blood test as well as a vaginal secretion test. If your bitch has an absent heat, it means that she skips her cycle completely. In contrast, a persistent estrus happens when your dog stays in heat for more than 21 days. This type of abnormal heat cycle can occur due to ovarian cysts and tumors, as well as exposure to exogenous hormones. Lastly, a split heat occurs when your bitch’s heat begins but stops before the second stage. Bitches will typically come back into heat within 3 to 4 weeks to continue their cycle.

One of the most common female dog breeding problems is a condition known as pyometra. This disease is a life-threatening infection of the uterus that typically affects older, unspayed female dogs. Once the uterus is infected, an array of toxins and bacteria move into the bloodstream and the uterus itself begins to die off.

There are two types of pyometra: open and closed. With open pyometra, the bitch’s cervix stays open and foul-smelling pus will leak from her sanitary area. In contrast, closed pyometra means that her cervix is closed off and pus builds up inside. This type is much more deadly. In either case, the treatment for pyometra is the surgical removal of the ovaries and uterus along with antibiotics, pain relief, and extra hospitalization. Some other treatments are available, however, such as prostaglandin therapy. When prostaglandins are given, the cervix opens and allows the bacteria to drain into it. Unfortunately, this method does not have a high success rate and may risk the life of the bitch if unsuccessful.

3. Rejection Of The Stud

A common problem for the newer breeder is rejection from the bitch. Most often, rejection is the result of improper timing. As a breeder, you already know that bitches ovulate 48 hours after the LH surge. More generally, this point occurs around the 11th to the 14th day of her heat cycle, about 11 days after her first day of bleeding. If your bitch is not interested in the stud, talk to your vet about progesterone testing to confirm if you have missed this mating period. In other cases, the temperament of the bitch may be to blame instead. Some bitches do not want to mate right away and may avoid the stud, sometimes due to stress and apprehension. In some cases, the breeder must hold the bitch to keep her still and calm for mating. Your bitch should not become aggressive towards the stud.

Apart from being dangerous for your dog, obesity brings a whole host of reproductive issues for the bitch, too. Overweight and obese bitches have more issues with their fertility, ovulation rates, and ability to whelp normally. Similarly, malnourishment in the bitch will result in a lack of heat cycles, embryo loss, abnormal fetal development, small litter size, and puppies that fail to thrive. Your bitch needs a highly digestible, high-quality puppy or development formula during her pregnancy, especially during the third trimester! These diets provide the calories and higher levels of key nutrients that your dam needs.

Anxiety is a common problem for maiden bitches. Some become frightened as the stud first enters, and others may become anxious if the stud is overly insistent or demanding. This is why it’s important that at least one handler stays with the pair during the mating. If either of the dogs panics, they may fight and injure each other. If either of the dogs panic during the copulatory tie, they may tear away from each other, causing internal injuries. Make sure that one or more people are present to keep the dogs calm, and to hold the bitch if necessary.

A common birthing problem for dams is abnormal puppy sizes. Abnormally large puppies may be unable to pass through the bath canal naturally. Some deformities can also cause problems with birthing, such as when puppies retain fluid or are in abnormal positions. Such puppies may require removal through a C-section. This is especially a problem when breeding two dogs of different breeds and sizes. While some of these mixes might seem novel at the time, when it comes to the birthing process, the dam’s life may be at risk when it comes to giving birth.

Dystocia is the term for a difficult birth. A bitch may experience dystocia if her puppies are too large, if her birth canal is too small, or if her uterus fails to contract. This condition occurs more commonly in some specific breeds, including Boxers, Bulldogs, Pugs, and Boston Terriers. If your bitch has contractions for more than 30 minutes without giving birth, strains weakly for more than two hours without giving birth, or more than four hours pass between puppies, it’s time to call your vet. The other signs include bloody vaginal discharge, a lot of clear discharge, or greenish-black discharge from more than three hours without delivery of puppies.

A wide range of health problems can lead to problems with fertility. These include sub-clinical uterine infections (cystic-endometrial-hyperplasiapyometra-complex), infections from Brucella canis, hypercortisolism, thyroid insufficiency, abnormal ovarian function, and chromosomal abnormalities. Hypothyroidism is another common cause of fertility issues. The breeds most prone to hypothyroidism include the Boxer, Dachshund, Golden Retriever, and the Irish Setter. Your vet will analyze your bitch’s hormones to check that she has enough for conception. They will also take a complete blood count and a urinalysis to look for infections. As well as this, imaging techniques may be used to look for any problems with the uterus. These might include tumors and anatomic abnormalities that might stop your bitch from conceiving.

Where a miscarriage occurs later in the pregnancy, a puppy may be stillborn. Unfortunately, infection is a common cause of miscarriage in dogs. Infections from organisms like Brucella canis, E. coli, Staphylococcus, and Toxoplasma gondii can cause miscarriages in bitches. Miscarriage can also be the result of hormonal abnormalities, such as abnormally low progesterone levels caused by some medications. If your bitch has abdominal pain, fever, or abnormal vaginal discharge (green, black, brown, pus) during her pregnancy, be sure to check in with your vet right away as these are all signs of miscarriage!

A false pregnancy, or phantom pregnancy, occurs when your bitch appears to be pregnant when she isn’t. This condition can come on even if your bitch has not mated. The signs of a false pregnancy begin four to nine weeks after her heat period. Your bitch’s mammary glands may become larger, she may produce milk, become lethargic, vomit, and lose her appetite. She may also begin nesting and showing mothering behaviors. Some bitches even show signs of false labor, with contractions, and then protectively guard small objects.

About half of all female dogs go through a false pregnancy in their lifetime, making this one of the most common female dog breeding problems. For some breeds, the incidence of false pregnancy is as high as 75% – these breeds are the Beagle, Dachshund, and Afghan Hound. False pregnancies typically resolve on their own within 14 to 21 days. Beyond this, it’s best to talk to your vet about your treatment options.

Have any more questions about common female dog breeding problems? Feel free to refer to our Frequently Asked Questions for more details. If in doubt about your dog’s health, always ask your vet for advice.

Can my female dog live without mating?

Dogs do not need to breed to live a fulfilling life. It’s important that prospective breeders do not project their own desires onto their dogs! A dog who never has puppies or never performs stud work will live just as fully as any other dog, as they do not have the same desires as people do.

How old should a female dog be to breed?

For most dog breeds, two years of age is the safest minimum to start breeding. By this age, most dog breeds are mentally, physically, and emotionally mature and are capable of mating. Most importantly, your two-year-old bitch should also have all of her necessary health tests done by this age. For example, the OFA evaluates hip dysplasia radiographs on dogs who are older than two years. A test done before this age is unreliable as hip dysplasia will not be clear on imaging until your dog is older.

How do I know if my dog should stop breeding?

Most kennel clubs ask for bitches to be younger than 8 years old to register litters. Also, many vets recommend retiring bitches around 8 years old. This is only a general rule, however, and you must know when your specific breed should retire! Chihuahuas and other toy breeds, for example, may need to retire much earlier at around 5 years of age. You must also consider the number of litters that your dog has produced. Most vets will recommend retiring a bitch after she has had a maximum of 4 litters.

Perhaps most importantly, you must consider the health of your bitch. Does she show signs of medical problems, especially those that can make breeding dangerous for her health? Do not risk her safety just to produce more puppies. If she is unwell, retire her from breeding. Many backyard breeders will produce large numbers of puppies regardless of the health and safety of their dogs, so always put your bitch’s safety first above all.

Can a female dog get pregnant if she doesn’t tie?

A dog can get pregnant without a tie. This is called a “slip mating.” In a slip mating, the stud does not tie with the bitch. When this happens, ejaculate that would be released into the bitch in the third phase of mating does not happen. There may also be some leakage of the second phase ejaculate. Fortunately, the section of ejaculate that is most rich in sperm is the second one, making it very likely for your bitch to become pregnant.

Any responsible dog breeder must know about common female dog breeding problems. Miscarriage, false pregnancies, and dystocia are just some of the many issues that bitches might face during the process. As a responsible owner, it’s up to you to get familiar with each and every possible problem before embarking on your breeding program. You must be able to help your bitch in an emergency. If you are unfamiliar with your breed’s health issues and reproductive problems, you are not yet ready to start breeding your dogs!