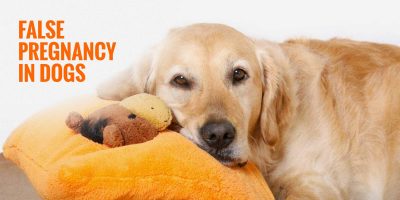 False pregnancies, phantom pregnancies, and pseudopregnancies are different names describing the very same behaviors that a female displays to show that she is going through a pregnancy when she is not.

False pregnancies can be relieving news for some dog owners who are not interested in breeding their dogs. On the other hand, it can be frustrating for breeders who organized a mating and then discover that their female is actually not pregnant. Pseudopregnancies in dogs are not very dangerous but once a female goes through one, you can expect her to go through a few more phantom pregnancies.

What Is a False Pregnancy in Female Dogs?

A phantom pregnancy, or false pregnancy, is a condition in which a female dog displays symptoms of pregnancy yet is not pregnant. Other common terms to describe this phenomenon are pseudopregnancy and canine pseudocyesis. Due to their ability to develop fertilized eggs and procreate, unspayed female dogs are at risk of experiencing a phantom pregnancy, although in some cases even spayed dogs have had false pregnancies. This is usually because the spaying was done during the heat cycle when progesterone levels were high. This fairly common condition results from a hormonal imbalance and tends to occur roughly one to two months after her estrus heat cycle. Moreover, this has also been known to happen in dogs several days after an ovariohysterectomy. The reason why this hormonal imbalance happens is unknown.

During a bitch’s heat cycle, progesterone levels are at their highest and then quickly decline soon after as the cycle comes to an end. This sudden decrease of progesterone causes a hormone called prolactin to take precedence, causing both hormones to be imbalanced. This imbalance causes a confusion inside the dog’s body and leads to physiological changes that happen to mimic the physical signs and behavior of a pregnant dog. A female dog at this point will think she is pregnant and will act accordingly.

Apart from hormones, other known causes of false pregnancies include hypothyroidism, abdominal enlargement, mammary gland cancer, or even mastitis.

Is Pseudopregnancy in Dogs Common?

You may want to make sure what your dog is experiencing is, in fact, a false pregnancy because many dogs exhibit similar symptoms after a heat cycle and many of the signs are also present in a few other health conditions as well.

How to Identify False Pregnancies in Dogs

False pregnancies in female dogs tend to exhibit similar symptoms of a real pregnancy, therefore identifying a pseudopregnancy would require one to look for these specific signs. It is very important that a dog owner, or breeder, pays very close attention to the dog and in the case of uncertainty, seeks the advice and care of a vet.

Physical signs to identify a false pregnancy in dogs include:

Canine pseudocyesis condition is known to be difficult to differentiate from a real pregnancy. Dog breeders and dog owner should get a second, more professional opinion. If the dog in question has not mated or did not have any contact with male dogs, then these symptoms are obviously more likely due to a canine phantom pregnancy.

Is Phantom Pregnancy in Dogs Dangerous?

A dog experiencing one false pregnancy is not at a high risk in terms of health consequences. However, it does set her up for future recurrences. A frequent recurrence of false pregnancies may mean your dog’s endocrine system is not functioning properly. You should, then, get her thoroughly checked up with the appropriate physical exams.

If your dog is vomiting and overwhelmingly lethargic and begins to secrete an odorous discharge, then it is best to bring her to your local veterinarian to get her checked out as this may be a result of pyometra, which can be fatal. While a phantom pregnancy is not a matter to be too concerned over, the severity of the issue depends on what is causing it in the first place.

Some dog breeds are highly susceptible to hypothyroidism such as Border Collies, Mastiffs, Rottweilers, and Dalmatians. A dysfunctional thyroid can lead to a rise in prolactin in the blood which leads to a false pregnancy.

Additionally, infected or inflamed mammary glands can be caused by conditions such as mastitis or mammary gland cancer that may lead the dog to think she is pregnant. When a female dog believes she is pregnant she may begin to lactate, which will exasperate the condition and the symptoms can cause more serious health problems. Furthermore, abdominal swelling may be due to problems with the organs and needs to be thoroughly checked out by a professional.

These are examples of causes that can pose serious threats to your dog. Also, continuously licking her teats, as well as self —nursing, encourages more milk —production and may cause inflammation, so it should be avoided. It is quite expectant for dog owners and breeders to experience fear in the case of a phantom pregnancy in female dogs. After all, the idea of preparing for an unexpected litter can cause some underlying anxiety if it is unplanned.

How Long Does a Dog False Pregnancy Last?

The actual symptoms begin to surface around 4 to 9 weeks after the female dog’s heat and can occur at any age. A false pregnancy usually runs its course and slowly begins to fade and will usually last 4 to 6 weeks.

It is important to differentiate if the symptoms are due to an actual phantom pregnancy or its due to high hormonal fluctuations because she just ended a heat cycle. In some dogs, however, the duration can last up to several months so you should get her checked out regardless. The duration of a phantom pregnancy really depends on various factors such as the dog’s health, the reason for the hormonal imbalance, the breed of the dog, or whether it is her first time or not.

How to Treat Phantom Pregnancies in Female Dogs?

In general, pseudopregnancies in female dogs often resolve on their own time by allowing it to run its natural course. The average time a fake pregnancy tends to last is 2 to 3 weeks. After that, the dog’s body reaches a point in which it knows it is not pregnant, thus the symptoms are alleviated. In order to prevent a prolonged false pregnancy, do not allow her to self-nurse.

If you notice that after some time the false pregnancy has not subsided, or the symptoms have worsened or her nipples swell up and turn colors, then it may be time to get her treated by a vet. In this case, drugs such as Galastop may be introduced to her to prevent further milk production. Other treatments that may be required or used to alleviate the discomfort are tranquilizers to treat her anxiety, or diuretics to decrease the milk production in the mammary glands and alleviate fluid retention.

There are things you can do at home to relieve some of the symptoms in your dog:

If you decide to do spay your female dog, make sure you do so after all the symptoms have completely subsided.

How to Prevent the Recurrence of a False Pregnancy in a Dog?