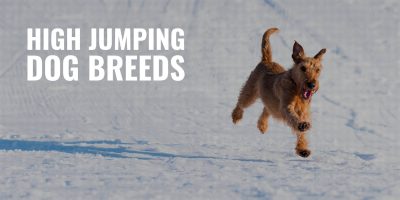 Dogs are naturally playful and rambunctious pets. They bark, follow you around, run, chase squirrels or other dogs, and most significantly, there are high jumping dog breeds. These pets have high stamina and superb agility that will leave you catching your breath.

However, some dog breeds that jump high have a latent ability to run faster and jump higher than your average pooch. Last 2017, a greyhound jumping dog named Feather reached a feat of 6 feet and 29 inches (191.7 cm). Read on to know more about dog jumping breeds, and maybe your dog belongs to one.

Many dogs can jump high, have high agility, and do superb acrobatics. You see some of them at competitions and videos across the internet.

Here is a list of dog breeds that jump the highest.

Jack Russell Terriers originated from England and accompanied people to hunt foxes. They also belong to the working terrier classification, mainly used to locate quarry in the earth. Standing at around 10 to 15 inches, this energetic little dog is very loyal and playful.

However, do not be fooled by its small stature because there’s more than meets the eye. Jack Russell Terriers tend to jump, and they can jump higher as opposed to their height. This dog breed can jump to a height five times higher than their size. If you have a 10-inch Jack Russell, it could jump up to 50 inches or 4.17 feet. It’s almost as tall as an eight-year-old child.

Hailing from the land famous for the Loch Ness Monster, the Border Collie is another high jumping dog. And just like any other herding breed, Border Collies are famous for herding livestock, particularly sheep. Moreover, they are considered highly acrobatic, athletic, and frequently hailed as the smartest domesticated dog breed.

Border Collies can easily conquer sheepdog trials and dog sports with their superb agility. They are also one of the dog breeds that jump fences as high as 6 feet. Make sure to have a wall higher than 6ft if you plan to have a Border Collie as a pet.

Recognized by the American Kennel Club in 1960, Vizslas originally came from Hungary. Further, they are a multi-purpose breed but most suitable for upland games like rabbits and retrieving waterfowls. The Canadian and American Kennel Club recognize Vizslas as a sporting dog. However, Federation Cynologique Internationale categorizes them as pointing dogs. Generally, they’re a mix of a pointer and a retriever.

In addition, with this mixture, Vizslas are highly versatile, mild-mannered, affectionate, and have excellent protective instincts. These traits make them great pets if you have kids at home. They can jump as high as 6 feet, which makes them adept at jumping hurdles like dog gates or fences.

Greyhounds are a type of dog called sighthound. Sighthounds, or gazehounds, mainly use their eyes and speed to hunt instead of their sense of smell. They also have slender bodies but are strong enough to reach average race speeds exceeding 40 mph.

This breed is popularly known for its speed, but it still has one trick on its paws. Greyhounds are among the dog breeds that jump straight up or can jump tall hurdles. They can quickly jump over a 5-foot high obstacle, but some can jump higher. According to the Guinness World Record, a Greyhound named Feather jumped a feat of 6 feet and 29 inches (191.7 cm) in 2017.

You might ask what breed of dog can jump higher than buildings. It’s beyond our imagination, but an Australian Kelpie can jump almost as high as a house. According to ABC News Australia, a Kelpie named Bailey jumped over a barrier that stands 9.68 ft. It’s nearly as high as the floor-to-ceiling height of residential housings.

Australian Kelpies, or simply Kelpies, are very agile and intelligent dogs. They are a kind of sheepdog that originated in Australia but are now found worldwide. Just like any other sheepdog, Kelpies are used to muster livestock, primarily sheep and goats. With their intellect, they round up the livestock with minimal guidance.

The Australian Shepherd is among the most athletic dogs in the world. Sometimes called an Aussie, they are a herding breed, which makes them very versatile and trainable. Contrary to its namesake, the Australian Shepherd did not originate in Australia. Instead, it emerged in the Western United States in 1840. They were highly admired at that time as people can see them frequently in horse shows.

Herding dogs shine in dog sports, and Australian Shepherds are no stranger to winning at those events. Their jumping abilities show up on dog events like frisbee, where they need to catch a flying disk by leaping. Aussies can jump up to 4.13ft in the air to catch the frisbee. However, Australian Shepherds are a bit tricky to train because owners need to have a similar energy and fitness level.

However, those under the working line type can jump the highest. There are precisely three working line types: West German, Czech, and East German DDR. With their hind legs made for working, they can effortlessly jump up to an average of 4 to 6 feet. Sometimes they can jump higher than 6 feet if there’s enough space and momentum.

Papillon belongs to this list of breeds that jump the highest. They are considered one of the oldest Toy Spaniels dating back to the 16th century. In fact, paintings of European nobility can’t be complete without a Papillon in it. Papillons got their name from their butterfly-shaped ears, and their name translates to butterfly in French.

Although they’re only 8 to 10 inches tall, these toy dogs can jump high. Whether they’re going through an obstacle course or catching a frisbee, Papillons can jump between 2 to 4 feet high. They’re highly active and trainable but can quickly jump dog fences and gates with ease.

Rat Terrier is among the top 10 highest jumping dogs. This kind of Terrier was prevalent in the 1920s and 1930s in the United States. Today, they’re considered a rare breed. Rat Terriers were primarily a farm dog and sometimes helped in hunting. These dogs also have pest-controlling capabilities, and they’re very tame, making it suitable as a family pet.

Typically, they stand at around 10 to 18 inches. Rat Terriers may look small, but they’re a very spirited and energetic breed and considered a hunting dog. They have slender yet muscular loins and long bodies, which propels them 5 to 6 feet into the air.

Another Scottish dog, Shetland Sheepdogs, came from the Shetland Islands of Scotland. They’re primarily bred as a guard dog. They’re also excellent as a herding dog and help farmers from keeping birds away from crops. This breed is smart and obedient but is food motivated.

In contrast to their size, Shetland Sheepdogs are very agile. A Shetland Sheepdog ranked first in the top 20 agility dog breeds of the American Kennel Club Agility Stats. Aside from being fast, Shetland Sheepdogs, or fondly called Shelties, can also jump. Shelties can jump over 3-foot high fences, and they can do vertical jumps.

Predominantly bred in the 19th century as a hunting dog, Weimaraner is now a family-friendly pet. Likewise, this breed is originally from Germany and is a gun dog. The usual job of gun dogs is to locate and retrieve game like birds and rabbits. However, Weimaraners also specialize in hunting large animals like boars and deers.

Weimaraners are known for their intelligence and sense of independence. These traits tend to make the breed to rule over the household. They can unlatch doggy doors and can knock over things and even people. Weimaraners, or popularly called Weims, can swiftly jump fences as high as 6 feet.

Whippets have a very slender body close to a Greyhound as they originated from the latter breed. The breed’s name came from the now-obsolete 17th-century word, which means “to move briskly.” Like Greyhounds, Whippets are also sighthounds that hunt small game like rabbits and fowls.

If you’re thinking of having a Whippet as a companion, be warned as they can jump fences. According to the Dog Docks, the 2019 highest dog vertical jump belongs to a Whippet named Spitfire. Moreover, the Whippet reached a height of 8 feet and 4 inches in the extreme vertical jump category. Spitfire also has the longest jump record of 31 feet.

Rottweilers are predominantly a domestic dog and one of the oldest breeds. Originally from Germany, Rottweilers used to herd livestock and pull carts with butchered meat to the market. Currently, they help in search and rescue, and they are as guard and police dogs.

This dog is well-mannered, alert, obedient, and trainable. However, this dog breed is not as athletic as other dogs on the list. Rottweilers can jump as high as three feet. However, on some occasions, they can reach up to five to six feet.

Are you still eager to learn more about jumping dog breeds? These Frequently Asked Questions should fill you with extra information.

How high can the average dog jump?

Dogs can jump at an average height of six feet. They can also reach this height when playing or when they want to clear obstacles like fences. Some dogs can jump higher than the average when they’re trained enough. However, the height of a dog’s jump solely depends on its health and breed.

Is it bad for dogs to jump?

Jumping is reasonably safe for dogs but only to an extent. It is naturally ingrained in a dog’s DNA as its ancestors in the wild do it in traversing their environment. Nowadays, dogs jump to show excitement or when playing. However, it is not advisable if your canine companion has a health issue or very frail.

Can a dog jump a 6-foot fence?

Several dogs can leap over a 6-foot fence. Border Collies, Australian Kelpies, and German Shepherds are some of the breeds that can conquer a 6-foot wall. Most of the dogs that can jump a fence are medium to large-sized ones. If you plan to get a big dog as a pet, you need to consider the fences’ height around your home.

Most Pit Bull breeds can leap over a 5-foot fence. If it has enough space, its jump can reach a height of six feet. They can achieve this feat because of their muscular body and amazing hind legs. However, jumping may not be beneficial to Pit Bulls as they are prone to hip dysplasia and hind legs heath issues.

How high can a Belgium Malinois jump?

Jumping is a common trait for dogs. There are also dog breeds that jump high, and there are dogs who can’t jump. They either do it out of excitement or greeting, or they want to leap over an obstacle. However, proper guidance and regular checkups can ensure dog owners that their canine companions are safe and well.