Dark Dynasty K9’s CEO and Founder, Marlon, wants to discuss the truth behind his breeding program. Over the past months, his kennel and his dogs have received a lot of skepticism because of his breeding and marketing practices. The dog in the center of this fire is Hulk, the dog who has been labeled by the media as the biggest pitbull in the world…

Here, at Breeding Business, we’ve been writing on and on and on about extreme breeding: be it for tiny Pomeranians or XXXXXXL bullies. It is indeed a massive problem nowadays that many breeders only consider the look of the dog, and breed towards their extreme idea of that physique, with very little care given to the dog’s health.

So we’re looking forward to watching these two videos as Hulk is a major figure in the pitbull and bully breeding circles, and although we don’t really have a clue about Hulk’s health (he seems fine), we can only dread having new pitbull or bully breeders following DDK9 footsteps, with this time a lot more medical consequences.

Despite all the drama surrounding them, Dark Dynasty and the family behind it are one of the most influential and famous Pitbull breeders in today’s time. For good or bad reasons, it’s for you to judge.

Let’s watch both parts, and debrief below. Each video lasts around 30 minutes.

If you had to only watch one, you should watch the first video. There is a lot less boring mindset talk and more actual facts about DDK9’s and their dogs.

The second part of this interview is mostly for fans, the content is less interesting for outsiders but still provides good content for fanciers of DDK. 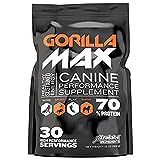 Gorilla Max Muscle Supplement for Dogs. #1-Rated Brand Since 2008. For All Breeds & All Ages (Puppy & Adult Dogs)
Buy on Amazon

In regards to Hulk and all the drama that have been surrounding DDK9’s so-called pitbulls, Marlon remains smartly playful. He starts by defining what a pitbull is (technically) and was back in the day. Marlon says that Pitbulls have always been a type of dog more than a pure breed of dogs, and it is true in some ways as they were indeed bred to fight. The first dogs were rather big and muscular with powerful jaws to bite and beat, and over time they became smaller so they could also be fast in their movements.

At around 19:00 of the first video, he says that he can prove Hulk is a purebred pitbull by doing some DNA testing. But he won’t. Many people would argue that if your girlfriend does not want to do a DNA test, she may have given birth to someone else’s baby. Saying you can prove something that has caused so much drama but not doing it is a little weird. And clearly raises suspicion.

Marlon also explained his problems with the various pitbull registries and kennel clubs and here as well said they were trying to keep their records clean by releasing statements saying Hulk was not registered. But he says also that they were right: Hulk is not registered although 95% of his family are apparently registered. Some would be cheeky and say the size probably comes from the unregistered 5%…….

The Money & The Fame Marlon clearly says that he is in business for the money but loves his dogs profoundly and both are possible. He said that prices given online are usually inflated and wrong, his dogs are around $2000, or a lot more expensive if security trained. He confirms that he refused a $1,000,000 offer for Hulk because Hulk is like family and he generates more than that and will still do so in the future.

With the fame coming, DDK has given itself a mission of educating dog lovers and fellow dog breeders. They’re now cautiously taking pictures of Hulk in different situations and with children to show how to deal with such big dogs within a household.

Let’s not fool ourselves. Marlon is smart and masters the Art of modern marketing and social media channels. I don’t even think that he actually cares whether or not his dogs are purebred pitbulls or mixed, his dogs are his commodities (and family) while DDK is a brand in its own right.

Somebody who wants to buy one of his dogs or pups is not somebody who cares much about having a purebred pit bull. He may be using other breeds to increase his dogs’ size and he should keep on doing so as long as he makes it clear that his dogs aren’t purebred. To me, he started saying it in this video by mentioning how pitbull and Bulldogs were the same in the ’80s, how he just didn’t register his dogs because he was busy, and so on. When you give one reason/excuse, you are usually not lying; when you start giving a boatload of them, you’re just straight-up lying.

A one-hour interview that could have been condensed in 15 minutes. The man clearly loves his dogs and he says it himself, they offered him this life including his wealth. Loving them does not seem to be against profiting from them hugely and he deserves it. He worked hard and started way before his sudden worldwide fame.

All I hope and all we hope is that his dogs are in good health and they look like it. The rest is just a big melting pot of drama and politics offering him massive publicity for free.

From this free promotion, Marlon has probably realized that now is the best time to capitalize on this sudden fame. He has books on the way and a TV show starting very soon. Several other projects are in the pipeline and this shows us that he is a businessman more than anything else, and we’ve got to respect that.