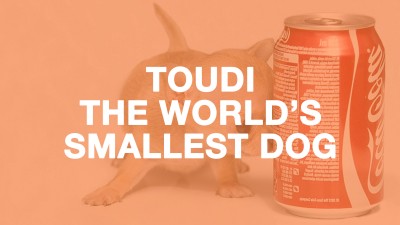 Toudi is a tiny Chihuahua pup, old of 12 weeks. His size is shockingly surprising… measuring a mere 2.75in (7cm) tall and weighing only 10.5oz (300g): Toudi could be the world’s smallest dog. Isn’t that cute? Yes, probably. Is it safe and healthy for the dog? Probably not.

Perhaps the health of the puppy is not the first priority of its Polish owners from Wroclaw who said that they had to be careful at home because he is the same color as their floor.

More fragile than we could even imagine, Toudi is smaller than a can of coke and looks more like a toy than a real dog. So small that you could keep him in a handbag or a purse and he could still have room to stretch and wander. Its owners are hoping to have him featured in the Guinness World Records Book.

Most dog breeders and dog lovers will wonder if this is not yet another publicity stunt to raise awareness and make money from, what seems to be, an unhealthy dog but only time will tell. The controversy is more than expected about this pooch’s owners and while some mock the little Chihuahua, claiming he looks more like a hamster, most people simply are mesmerized by him.