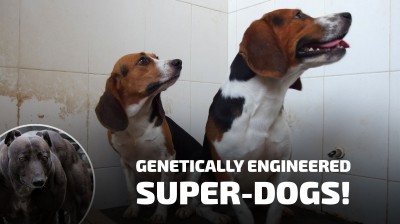 An overly-muscular Beagle has been bred through genome engineering by Chinese scientists from the Guangzhou Institute of Biomedicine and Health. Scientists confirmed they have created and can produce genetically modified super-dogs that are faster, stronger and more powerful than the average mutt.

Genetically Engineered Dogs, Made In China

Before breeding a beagle, there has been a whippet that was modified genetically in order to have a highly muscled whippet as reported in the journal Neuromuscular Disorders. Indeed, it was understood that having a mutation of the myostatin gene led to more muscle and speed.

Scientists in China say they can now engineer the same change into other dogs and have done so with Beagles.

Hercules and Tiangou are the names given to the two genetically engineered Beagles. They are thought to have better physical shape and fitness to perform certain tasks such as hunting.

These dogs will have more muscles and are expected to have a stronger running ability, which is good for hunting, police (military) applications.

When DNA alterations are introduced at the embryo stage, they can affect every cell in an animals’ body, including sperm and egg, the cells of the “germline.” Lai’s team says it checked Hercules’s sperm and found that, if he was bred, he would pass the myostatin mutation onward. “The favorable traits that result from gene editing can pass generation by generation,” says Lai, and it will be possible to breed large numbers of gene-edited dogs “which can be commercialized.”

DNA Dog Breeding To Save Humans?

That gene myostatin is already known and has been well-studied. Debates have even taken place in the United States over gene-doping to double or enhance the muscular mass of future athletes. From studies up to today, there are no known drawbacks to such practices. It could, in the future, help humans who have genetic illnesses weakening their muscular structure.

The Chinese scientists working on this project have explained that their objective is to repeat this dog breeding with other dog breeds to create other canine DNA mutations to ultimately study and possibly treat human diseases.

The goal of this biomedical research is not to create thousand-dogs breeding structures at all according to the Chinese scientists, it is simply to help understand and tackle medical issues and genetic deformation in human-beings. They have said that dogs are semblable to humans in terms of physiological, anatomical and metabolic characteristics.

While this work was done with a more noble cause in mind, aiding scientific research, the authors do note in the paper that the technique could also be used to create dogs with favorable traits for other purposes, although this doesn’t necessarily mean pets.

The ethics of creating designer companion dogs could be argued, but it’s not really that different to what humans have been doing with the species for thousands of years anyway, albeit this method significantly cuts corners.