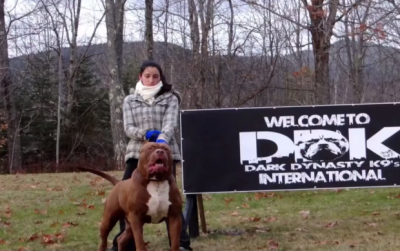 Hulk seems to have been bred as a publicity stunt and a money-making machine. Yes, it is the World’s largest pitbull and the breeders featured it in multiple videos with an emphasis on its enormous appearance and size. Why not, after all? Well, there’s more to the story.

Their website also features a video section, every single one highlighting how dangerous and deadly these dogs are. There is much to be said about the kind of clientele they are cultivating, and the fuel they are giving anti-Pit Bull advocates, but they are also contributing to the “designer dog” field…

Over the top and unnecessary

Charging $20,000 as a stud fee is incredible, especially for a dog that is not precisely matching any breed’s standard and simply falls into the “world’s largest pit bull breed” made-up appellation. The breeders are famous in the bullies underworld for breeding designer dogs that appeal to “big dawgs.” Their dogs are huge, and they are getting more and more enormous. Hulk weighs 175 pounds and comes from big parents, but these are the lucky ones.

These videos, these unique dogs may not suit everybody’s taste but who cares, after all? ASPCA cares. Promoting these dogs makes them be hype and trendy, it is followed by a surge in the demand, and shortly after, a surge in euthanasias. Statistics provided by the ASPCA suggest that more than 1.2 million dogs are euthanized every year; and it is without surprise that most of them, 800,000 to be precise, are considered pit bulls.

Negative reinforcement is used a lot in Dark Dynasty K9 training methods, they seem to use, often, dog shock collars and prong collars. These types of collars are debated in several countries and a ban is on the table.

We do not know if Dark Dynasty K9 are promoting dog fighting, but for sure, most dog fighters use similar training techniques to raise pitiless dogs, ready to die for their “title.”

The dog fighting business (if we may call it so) generates revenue from gambling, stud fees, and admission fees. Top fights are said to have potential purses of $100,000 (USD) and obviously attract a whole lot of organized crime who enjoy this illegal dog sport. CNN also stated in an article from 2013 that more than 100,000 people are engaged in dog fighting on a non-professional basis.

It is without surprise that breeding dogs that are fit for high-level dog fighting competitions are appealing to some. Who else than a pitbull-obsessed billionaire or, more likely, a professional in dog fighting would pocket out $20,000 to get a baby Hulk? The breeders may voluntarily, or involuntarily, become part of a seedy side of dog breeding that is indeed fruitful but rather disgusting and shameful.