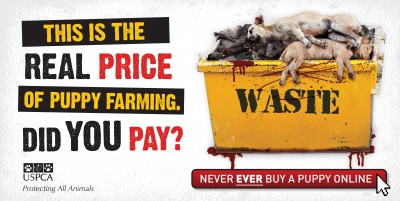 A new campaign against puppy farming comes out every week these days. This time, it is the USPCA (Ulster Society Prevention and Cruelty to Animals) that has revealed some worrying details about its hard-hitting forthcoming advertising campaign to appeal to the Northern Ireland audience to inform them about the tragic consequences of puppy farming.

Raise People's Awareness About Where Their Dogs Really Come From

USDA is launching this campaign on Wednesday 15th April at 9pm along with a BBC Scotland expose called The Puppy Factory. Both trying to get people conscious of this shocking million-pound business created by backyard breeders and secretive large-scale puppy factories.

The most unpleasant fact coming out of this campaign is the confirmation that a huge number of dogs bought online are directly produced by uncaring puppy farmers. Most dog breeders now advertise and promote their affix and litters online through their website, classified ads or even Facebook, but not all of them are puppy farmers. Remember: if someone does not want to let you visit their kennel and view the pup’s parents, give it a pass.

Let’s be clear here, when we say “bought online”, we meant bought online like you should shop on Amazon, except that here you receive the dog or you pick it up in an agreed location. Puppy farmers do not want anybody visiting their farms, so they pretend to be on a journey to some fake destination and offer to meet you half-way.

A third of all dog bought today are come from puppy farms, the USPCA warned. Northern Ireland is the worst student of the classroom in the United Kingdom and this is why the campaign principally targets them. They have the worse statistics of stray pets which consequently leads to the waste (and destruction) of thousands of healthy dogs every year, by local councils. Yes, thousands.

The Solution Has To Come Through a Much Stricter Legislation

South Wales just started the movement by enforcing a set of much stricter rules and laws for all professional dog breeders. They now must comply on many more aspects of their breeding programme than just the hygiene, they have to setup a puppy socialisation programme and intellectual stimulation for adult dogs.

Stephen Philpott from the USPCA seems to also think that this issue will be fixed only if a new law comes in and regulates all dog breeders.

The only acceptable answer will be increased regulation of this totally unnecessary business activity. We welcomed a new legislation back in 2012 to protect animals but sadly this is not being adequately enforced.

Complaints continue to pour into the USPCA on a daily basis from distraught consumers whose dogs are sick and dying. Meanwhile, other members of the public think they can dump their family pet on the welfare organisations.

The British Labour Party has published a pledge to fight against animal cruelty, let’s hope it goes somewhere this time.

Buyers Have Their Responsibilities, Too

The Special Investigation Units attached to the National Societies are reporting puppy farming as the number one abuse of animals across the British Isles and it is now on an unprecedented commercial scale.

The USPCA wants puppy buyers to do some research beforehand and not want a puppy on Monday, and buy it on Tuesday. It is a life changing decision that requires visits to the dog breeder, reading, prepping and ultimately, getting ready to welcome a pet for the next ten to twenty years.

We are not amongst those who put the discredit on anyone selling dogs online as most dog breeders are responsible, at least two-thirds as per this campaign. Fraudsters are everywhere, online but also in pet stores. Each buyer must take his own responsibilities and buy from reputable dog breeders so the low demand for puppy-farmed animals will force bad breeders to find another job.