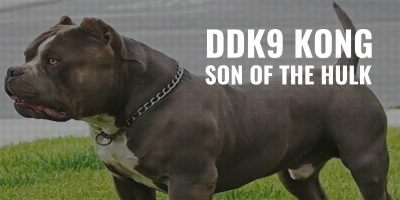 The world-famous Pitbull, the Hulk, will leave a strong legacy behind. Hulk is the biggest Pitbull on the planet, but that may soon change as his son, DDK9’s King Kong, is set to be even bigger. This is crazy if you think about it. At just a year old, Kong is already 150 lbs. Dark Dynasty K9 is the kennel that Kong calls home. Although he is not the only super big offspring of the Hulk, a 175 lbs behemoth if you remember, DDK9’s King Kong is on his way to becoming the only one that attracts all the eyeballs.

Marlon Grennan owns Dark Dynasty K9s. Marlon and his kennel rose to fame thanks to the world-famous Pitbull we now know as the Hulk. And it was only a matter of time since the kennel caught the eye of fans from around the world. Today, Dark Dynasty K9s is known for its gigantic puppies that receive proper training to carry out protection jobs.

Operating a business that not only produces alpha dogs but trains them to be work dogs makes Dark Dynasty K9s a really unique kennel. This is the reason why most of their puppies are super expensive even at a very young age when one can’t expect the puppy to be well-trained for security. As a matter of fact, Marlon recalls a time when he had the opportunity to sell the Hulk for half a million but he denied.

The allure and anticipation regarding DDK9s will only grow as the King Kong becomes a full-sized alpha ready to step in the shoes of his father.

DDK9’s King Kong is set to be the world’s largest Pitbull. A direct descendant of the monstrosity we call the Hulk, the Kong is 2 years old as we write this article in 2020. Even though he is only 2, he is already approaching the weight of his father, standing currently at 160 lbs. While currently, King Kong weighs lesser than his father, he still has 2 years of growing left. Who is to say he won’t be the first 200 lbs Pitbull?

The weight is also where the controversy begins. You see American Pitbull Terriers can weigh 30 to 85 pounds. This is in stark contrast to Kong and the Hulk who both weigh over 150lbs. And due to this stark contrast in size, many people argue that the Hulk and the Kong are a cross. While not confirmed by his owner, Hulk is thought to be a cross between an American Pitbull Terrier and an American Bulldog.

Crossbreeding can introduce several complications in the long run. But as things stand now, Kong is a healthy pup that has a mild temperament inside the house. As a matter of fact, he loves playing with kids and is generally a pretty safe house dog.

In a world full of dog aficionados, the presence of a 175 lbs Pitbull did not go unnoticed. The Hulk got crazy amounts of publicity because of this and that attention has trickled down well to Kong. From newspapers to TV channels, everyone covered these gigantic dogs and their story. This publicity was everything Marlon Grennan needed for his kennel, the Dark Dynast K9s, to become a success.

Initial coverage aside, the DDK9s are still in the news thanks to how the business has positioned itself. In 2018, DDK9 and its owners became the front and center of a digital tv series; Dog Dynasty. The show follows the chronicles of the Hulk, the lives of his owners, and the overall affairs of the kennel. This series has been a massive success on YouTube garnering over 150 Million views!

To keep the spotlight on them, Marlon and his wife Lisa Grennan also operate popular Instagram and Facebook pages. With media appearances, interviews, and a whole TV show, it is no wonder that the Dark Dynasty K9s is a famous kennel. And the prices of their puppies reflect this pretty well.

American Pitbull Terriers are known to be intelligent, energetic, and curious dogs that are also family-friendly. Whether you believe that DDK9s puppies are purebred or not, the fact remains that Kong, at the end of the day, has Pitbull blood. So he should have all of these qualities. Although he is unapologetically big, Kong is still a Pitbull at heart. From the videos posted by the Dark Dynasty web series, we can see that he is harmless. Even Marlon Grennan’s 3-year-old plays with him and gives him belly rubs. Kong loves attention just as much as any other dog. He hangs around family members, loves to cuddle, and play. For a breed that is notorious for its aggressive behavior, this kind of affectionate behavior can be a little unexpected.

But you should not confuse this with the ruthless aggression that is a part of Kong’s legacy. At home, Kong may be a loving pup but when he is outside on a protection duty or just following his natural instincts, Kong is a dangerous dog. On an episode of Dog Dynasty, the web series about DDK9’s, the kennel’s top-performing dog, the Pitbull Ace, got attacked by Kong and Razer. Although these 3 puppies belong to the same kennel, the animals were following their natural instinct of fighting over a female. Sadly, Ace suffered mortal injuries and died.

This is a sad reality of this business. No matter how much we want these giant pups to be family dogs, the fact remains that their primary purpose is protection. Training only goes so far in molding the behavior. It is just impossible to suppress the natural instincts of these dogs. In short, Kong is gentle with kids and looks very peaceful inside the house. But put him next to a dog and he might become overly aggressive.

Marlon Grennan is a smart businessman. To capitalize on the popularity of Hulk and Kong, he has set up a considerably vast business around his kennel. From supersized protection dogs to clothes, DDK9’s sell everything. And in order to push their endeavors to the next level, DDK9 Kennel has set up an online store that sells apparel for men, women, and kids.

In addition to apparel, DDK9 also sells training gear. Selling training gear is quite relevant to their protection training program for dogs. They sell all sorts of training gear like bite protection suits, harnesses, and leashes. Aside from selling pups and sponsorships, the apparel and the training gear are the biggest businesses that DDK9 operates. Recently, they have also started selling CBD.

For anyone who doesn’t know, CBD is an up and coming aid that people claim treats situations like anxiety, depression, and joint pain. All in all, DDK9 has used social media and its popularity to the fullest. As a result, they have several successful businesses.

DDK9’s Kong is one of those dogs that have been shrouded in mystery. As a result, people on the internet are asking all sorts of questions related to Kong. Some of them have been answered below.

Although his owner Marlon Grennan says Kong is a healthy pup, many people have legitimate concerns regarding his long term health. You see purebred dogs are, generally, in peak health. Much of this has to do with the way the breed has evolved over the years. And breeders swear by their health. Through careful selective breeding, genetic disorders that plagued the past generations are no longer present in the current generations.

Consequently, these dogs are the gold standard when it comes to health. Whether it is true or not is still the subject of an on-going debate. Now because many don’t consider Kong to be a purebred dog (his owner says otherwise) there are concerns regarding his health.

Is Kong Bigger than Hulk?

Kong isn’t bigger than the Hulk yet, but he looks as though he will be in the future. Currently, Kong weighs 160 lbs which is still 15 lbs less than what Hulk weighs. But here we should note that Kong is only a 2-year-old pup and has still got 2 years of growing left.

As things stand now, Kong will surpass Hulk in a year or two and become the largest Pitbull on the planet.

When did Hulk the Dog Die?

Contrary to what many people believe, Hulk is still alive and healthy as of May 2020. He still trains at the DDK9’s kennel and still fathers a lot of pups.

So, why do people think he is dead? People confuse the death of Ace, another DDK9’s pup, with Hulk. Ace died when two other DDK9 dogs attacked him in a contest for a female. Long story short, Hulk is still alive and producing more litter.

Is Kong the Dog a Pitbull?

There’s no sure way to tell, but from the looks of it, Kong is not a purebred. When asked whether the Hulk was a purebred, Marlon Grennan, the owner of DDK9 kennel, said yes he is and he can prove it by DNA testing. But to this day he hasn’t. This suggests that Hulk isn’t a purebred. Many experts conjecture that Hulk can be a cross between an American Pitbull Terrier and an American Bulldog.

Kong is truly a sight to behold. In time it is very likely that he will break Pitbull size and weight records and overtake his father Hulk.