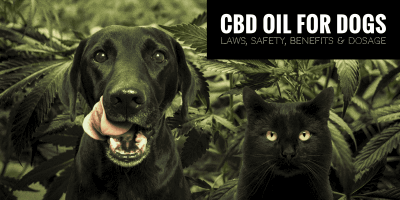 If you’re wondering what does CBD oil for dogs do and why a lot of pet owners are talking about it, you’re not alone. It seems like CBD oil (Cannabidiol oil) just boomed very recently, and talks about it entered into the lives of everyone from dog show attendees to vets.

Many people claim that dog CBD oil helped their dog’s separation fears and canine anxiety. Others claim they use it for themselves because it’s the only thing that helps their epilepsy. Then you have the DEA saying all CBD oil is illegal federally, which lead to CBD companies turning around and suing them. So what’s the truth in all of this, because this is already confusing.

Weed, marijuana, pot are all just terms for the harvest and drying of flowers that come from Cannabis sativa plants. You can think of hemp as a cousin — they share a lot of the same genetics but there is one enormous thing that separates the two plants.

Terpenes — or terpenoids after the plant has been dried and cured — are what give plants their aroma, flavor, and color. You’re probably familiar with them already if you’ve ever used essential oils, perfume, aromatherapy, etc. Flavonoids are similar to terpenes and help produce the plant’s aromatic properties. Think of them as the icing on the cake as they can produce similar therapeutic effects as CBD, but they just aren’t quite as good at doing it.

Essential oils are incredibly popular for both humans and dogs and if you’ve used an essential oil before you most likely used terpenes that are also found in hemp.

OK, now that we understand what makes up hemp and cannabis, let’s go back to their one big difference: THC (tetrahydrocannabinol). We have all these lovely compounds found in both cannabis and hemp that produce a lot of medical help — hence the rise of medical marijuana. Then there is THC, which is the only chemical compound out of the 100+ cannabinoids and the 100+ terpenes that causes that classic marijuana high. When we debate whether marijuana is safe, whether it’s a gateway drug, we are actually talking about THC presence and levels.

Marijuana strains high in THC and low in CBD are considered recreational marijuana. While medical marijuana strains are high in CBD and low in THC — this way the patient gets the medical benefits but not much of a high, if one at all because CBD oil came as a result of deliberately breeding low THC cannabis strains. Take out the THC from a cannabis plant and what you have is a plant that cannot get you high — making it safe and legal — but will still give you many of the same medical benefits that medical marijuana gives you.

We can leave the THC and recreational marijuana debate to humans because while THC is not toxic to humans, it is to pets because they are much more sensitive to it. So we always want CBD oil that is derived from hemp because that means it legal and safe. For hemp to be classified as legal hemp, it has to have no more than 0.03% THC based on dried weight. That’s such an insignificant amount that you could try smoking hemp all day, and while your arthritis will feel better and your anxiety has come down, you won’t be high at all. For our pets, while THC is toxic to them it has to be in high doses, often when a pet — OK, let’s face it a dog — is taken into the veterinarian’s office for eating a marijuana edible, the concern is more about the chocolate.

To summarize what we have learned so far about hemp and cannabis:

This first one could be a culprit for its recent popularity — though, I’m sure the thought that they helped popularized CBD oil would cause them quite the fright. In December of 2016, the DEA released a statement proclaiming that all CBD oil is illegal as it’s derived from marijuana. If CBD oil wasn’t gaining enough traction before, it certainly was now as it entered in the nightly news cycle. You see, it’s pretty easy for CBD oil companies to come out and state why the DEA is wrong. While CBD oil can be derived from marijuana, CBD oil can and should be derived from completely legal industrial hemp.

By the name you can guess that full spectrum CBD oil is the one that contains all properties of the hemp plant. As well, you know that this is good because it provides additional medical benefits and reinforces CBD’s benefits with dogs. So what’s up with CBD isolate? Well, that answer is easy, a couple years ago we thought CBD isolate was better because it was only CBD. We underestimated how much the other compounds helped out — that was until researchers looked at the two.

In 1998, researchers found that those that were given full spectrum, felt CBD oil’s therapeutic nature starting at much lower doses compared to CBD isolate. Additionally, when given very high doses, full spectrum CBD oil continued to provide therapeutic effects where the isolate’s effects had started to decrease. The whole hemp plant is greater than the sum of its parts. This synergetic nature of all the cannabinoids — besides THC —, terpenes, and flavonoids come together to produce a polypharmaceutical phenomenon called the Entourage Effect.

So where is the CBD isolate’s place today? Also easy to answer, some people find CBD in particular works the strongest for their condition and don’t need the large therapeutic range that full spectrum gives. Because we are discussing CBD oil for dogs, your dog should stick to full spectrum CBD oil as it’s incredibly difficult to tell if isolate is working better on them (they can’t tell really you themselves).

So we know about all these different ways CBD oil provides therapeutic properties, so let’s look at what’s actually going on in a dog’s body when CBD oil is taken. With CBD backed by a multitude of its buddies, CBD itself will do one of two things:

About 600 million years ago, vertebrates started developing a system that plays a crucial role in making sure the various internal systems keep themselves in line and function properly even when an outside threat is smacking them around. If you remember back to your HS science class, this is called homeostasis. Homeostasis is about stabilizing the internal systems and is responsible for sleep regulation, the immune system response to pathogens, correctly interpreting threats through the fight-or-flight response, etc. So how does your dog’s body do this?

The brain creates neurotransmitters called anandamide, otherwise known as endocannabinoids, that will go off to different locations in the body to check up and make sure the internal system is functioning properly even if it’s under heavy stress. It works like the this:

A healthy and functioning body is really an enormous hub of communications that are cleanly being translated and forwarded to the right spot. For whatever reason, human and canine Endocannabinoid System isn’t able to keep up with modern living. We get caught up in so much chaos that we don’t realize that our pets are too. Dogs are like sponges, they absorb our stress, our emotions, and they’re doing this in an unnatural environment for them. CBD oil improves a dog’s endocannabinoid system.

The main thing CBD oil for dogs does when it enters into the body is to get attached to an enzyme called fatty acid amide hydrolase (FAAH). This enzyme is a friend and enemy to the endocannabinoids because it will break them down into multiple chemical compounds that can be later reused, but it does this too fast — well, at least too fast for mammals that live in a modern society. While it’s a cannabinoid, CBD cannot attach to cannabinoid receptors, but by inhibiting the enzyme, FAAH, anandamide will be protected on its journey to an internal system that’s out of whack, ensuring that it attaches to the CB receptors.

CBD can also be a dog brain’s personal messenger. CBD still will not attach to CB receptors, but it can attach to a few select others that when activated will help provide similar therapeutic and regulatory effects. That’s it; that’s all CBD does.

But this explains why CBD can help with so many different medical conditions. CBD is just strengthening the natural physiological system whose entire job is to monitor, protect, and rebalance other internal systems. This is why you and your pet can take CBD oil for:

There are two notable side effects to worry about — but this applies more to humans that use larger than average doses. At moderate doses, pet owners have little to worry about. When doses do get high, some sleepiness can occur, as well CBD can affect the metabolization of pharmaceuticals that are metabolized in the liver. This last one is odd because changing the metabolization rate is clearly bad, but little seems to come from it — in fact, one study that saw this issue, simply said to monitor blood levels for the pharmaceutical drug and continued use of CBD.

Where to Go From Here

Wait, there is still more to learn! Actually, you’re OK, we are done for the day because you learned a lot — you learned: the difference between hemp and cannabis, why hemp is legal, the difference between CBD full spectrum and isolate, how CBD works and what it works for, the low side effects. Give yourself a pat on your back, you did a great job and now you understand CBD oil way better than most, which will be nice because CBD isn’t going anywhere soon. But your learning doesn’t have to be over — for more information on CBD oil and where you can find it check out Innovet Pet.