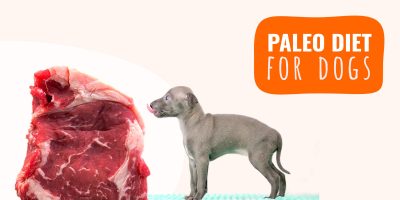 In short, the dog Paleo diet consists of raw foods and ingredients that canines were biologically designed to eat. These include a lot of meat, raw bones, fish, offals, and very little carbs, starchy vegetables, or refined fats.

The goal is to mimic what dogs, wolves and other canines were eating in their first days. When mixed with today’s science, it makes total sense to move away from commercial dry dog kibble. A paleolithic diet for dogs is a very good choice but it is far from being perfect.

Raw meat, daily meal preparations, storage, balanced nutrient profiles, and so many other factors should be considered. Especially for dog owners willing to make the move to a canine paleo diet forever – and not just as a month-long fun experiment! Paleo is more than just a diet, it’s a lifestyle and generally, the entire household following its concepts and principles. (Obviously, more or less rigorously!)

What Does the Paleo Dog Diet Consist of?

Paleo diet for dogs, similar to the Prey Model Raw Diet, consists of foods that pets are biologically designed to eat. Paleo pet foods contain animal proteins only with added vitamins and minerals. They are absolutely free from most carbohydrates, including grains, legumes, refined sugar, starchy vegetables, and chemical additives.

The Paleo Diet was first developed by Loren Cordain, a researcher from the Colorado State University. He formulated the concept of Paleo Diet, explaining it as the way humans and animals were genetically designed to eat. A Paleo diet food list typically consists of lean meat such as chicken, pork, turkey, buffalo and lean beef, fresh fruit, seafood, non-starchy vegetables, nuts, eggs, plant-based oils, and seeds like sunflower and pumpkin.

The Paleo Diet has some essential aspects to it. There are lots of foods approved in this diet and the portions are not specified as such. You should make sure that you are not feeding your dogs with too much of those items that can cause a calorie issue. The diet is usually high in protein, supporting muscle building in your pet. The amount of carbohydrates, on the other hand, is quite restrictive though this grain-free diet allows some healthy carbs such as berries and fresh fruits.

Benefits of the Paleo Diet for Dogs

Paleo Diet Foods basically ensure that your dog is eating what it was created to consume. As such, Paleo diet-friendly foods improve the immune system of your dog, while also caring for their cardiovascular and periodontal health. Some of the advantages of the Paleo Diet are as follows:

Paleo diets are grain free and have an essentially restricted portion of carbs. This suits your dog well because they were ideally not meant to intake carbohydrates in the early days. The lesser the carbohydrate intake, the lower is the chance of developing allergies too. On this particular point, it is less restrictive than the ketogenic diet for dogs.

Paleo Dog Diets are cleaner in the sense that they comprise of raw chunks of meat and starch-free veggies. There are no fillers, additives, preservatives or chemicals. Thus, the diet is completely balanced and healthy.

Paleo foods mostly consist of proteins and fats and hence, the meals are fuller and stay for long. This is also because of the absence of processed ingredients and refined sugars. The more real the foods, the longer it takes for the digestive cycle to break these down.

Paleo diet foods are always more palpable and tasty. As opposed to conventional dry dog food, which your furry one almost stays away from, these raw pieces of meat and veggies are delicious enough to let your dog gorge on them fast.

Intake of Paleo Diet foods implies eating a lot of starch-free vegetables and absorbing the plant nutrients in fruits, nuts, and seeds. This has anti-inflammatory properties. The increased portion of red meat calls for higher levels of iron too.

Disadvantages of the Paleo Diet for Dogs

Paleo Dog Diet, with all its benefits, has some downsides as well, making a few dog owners apprehensive about feeding their dogs this particular diet food. Some of these disadvantages are as follows:

Presence of Bacteria and Salmonella

Raw meat is the primary food of this Paleo Diet. Since raw meats are usually full of bacteria and salmonella, the Paleo Diet, as a whole runs the risk of bacterial presence as well. However, this is not too much of a problem because your dog’s digestive system is somewhat adjusted to this bacteria. The transition can initially cause digestive issues for this very reason.

Paleo Diet does not strictly specify the amount and proportion of the foods included in it. Also, these foods are mostly prepared at home without weighing the ingredients as such. That is why; Paleo Diet might often turn out to be unbalanced for your pet. There can be too much of anything and too less of something else, thereby, giving a vague idea of what and how much the dog ate.

Athletic dogs that are quite active need carbs in a higher proportion that Paleo diet fails to provide. Eating less to almost no grains or dairy can be healthy but not so suitable for these types of dogs. In fact, if your dog is more into vegetarian foods, veggies and fruits will be the only options.

Paleo Diet is healthier but not so easy and convenient to prep up. This is relevant on different levels. Logistically and with respect to shelf life, the food cannot be stored for long. The freshness also does not remain intact over time. More importantly, serving chunks of raw meat can be uneasy and even gross for dog owners, especially vegetarians.

The Paleo Diet is way more expensive than conventional dog foods, even commercial dry dog foods. The meat needs to be prepared at home too, adding to the expenses. The high price is, however, not unjustified. The Paleo diet foods are completely free from fillers, the presence of which lowers the price of conventional foods. So, even if you are paying a high price, you are getting something much nutritious and healthier n return for your precious dog.

How to Transition a Dog to a Paleo Diet?

A paleo diet is definitely recommended for your dog. Your furry one can adjust with this diet easily because as the idea behind this diet goes, dogs were created to eat precisely these. However, the transition from one diet plan to Paleo will take some time, approximately over a span of two weeks. The transition should be initiated gradually as sudden changes in diet can cause digestive problems, upset stomachs, diarrhea and so on.

Ideally, you should mix your furry one’s current food with the new Paleo diet foods slowly for the first 5-7 days. After that and with each passing day, keep decreasing the portion of the old food and increase the new one. This way, your dog will find it easier to get used to this diet.

What Are the Best Brands of Paleo Dog Diet Foods?

There are quite a few brands out there, selling Paleo diet-friendly foods that have received admiration from dog owners. These are Orijen, Merrick, Sojos and Grandma Lucy. To be more precise, the most popular Paleo dog foods that are worth considering are Orijen Freeze Dried Tundra Adult Dry Dog Food, Merrick Backcountry Big Game Dry Dog Food, Sojos Wild Free-Range Dog Food Boar and Grandma Lucy’s Pureformance Grain-Free Freeze Dried Goat Formula. All of these are biologically approved raw foods that promise several health benefits for your dog.