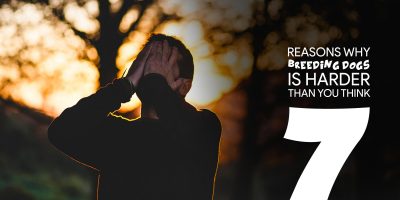 Nowadays, most of the general public think dog breeders have it good. The belief is that breeders exploit their dogs in order to squeeze every dollar out of their semen and ovaries.

And yes, some of them do it and we all hate them from all our bones. For the huge majority who is out there breeding dogs, it’s actually done responsibly and with the best intentions at heart.

Breeding dogs costs a lot of money, takes a huge amount of time, and is a lot harder than you think. Time and money aren’t even the main things, they are just the most tangible factors here. Frustration, emotions, stress, anxiety, complaints and dog world drama… This is what ethical dog breeding comes with, and by the time you sell your puppies, you’ve spent a lot more money that you had allocated.

Saying Goodbye To Your Own Puppies

The hardest part for dog breeders is when it’s time to say goodbye. I am not sure whether or not you realize but dog breeders often spend months preparing a breeding, then two months caring for their pregnant bitch, and again two or three months with the puppies. At times, the breeder himself is becoming a parent and has to feed and clean the whelps.

Obviously not puppy farmers, but actual lovely breeders get attached. Most of them will even tell you that if they could keep them all, they would. Reality check, they can’t, so they have to find the best families possible. Screening the future forever homes is often times the only way to feeling better about letting these puppies go.

Some breeders say you get used to it with time while others will say you just get used to the pain and after years, you just know how to better cope with it. Regardless, it’s still a very complicated moment that can spread for weeks after all the puppies have been homed.

Constantly Being Referred to as a Puppy Mill

We’ve written over a handful of posts about puppy farmers and unethical dog breeding. Sadly, whenever somebody discusses dog breeding in public, it’s a matter of seconds before the conversation shifts to puppy mills, overpopulation in shelters, and the motives why breeders breed.

Of course, it would be silly to dismiss all these concerns simply because we are, as a dog breeding community, trying to educate all breeders to become expert. We understand why most of the general public feels that way about breeders. We all saw shocking footage of puppy mills and it’s extremely easy to put all breeders in the same basket and assume they all are more or less extreme variations of those disgusting bad breeders.

Yet, such generalization is not helping the cause, and it’s creating a war between ethical breeders and the general public. And while we’re warring on and offline, puppy farmers keep on puppy farming. What we should all do is to tackle the serious problems found in modern dog breeding, and avoid any type of generalization.

Planning a Future Breeding Is Frustrating

Frustration generally hits, at one point or another, any dog breeder in the process of planning a new breeding for one of their studs or dams. This stage of the dog breeding process definitely separates responsible breeders from those doing it solely for financial gains.

The decision boils down to the five questions above because each dog has characteristics you want, and some you don’t want. Is it worth taking the risk of bringing undesired traits to your bloodline in order to get the desired ones? It’s a trade-off and you are the one having to decide. Gut instincts don’t really cut it anymore once you want to be amongst the greatest breeders.

Now, once you get in touch with a breeders and need their studs for a breeding, it takes long weeks to get hold of all the information you need. Starting with precise pedigree information, then studying the ancestors, agreeing on contractual details, etc.

Careful research and studies have to go into play, as well as a lot of money spent attending dog shows to spot the most suitable specimens out there who are still underpriced. Everybody wants to breed to the top Champion but such specimens are often overpriced. The best strategy is to train your eye to spot future gold nuggets.

Vet bills are an obvious culprit when we talk about how much does it cost to breed dogs. Yet, we’ve listed the expenses linked to running a dog breeding activity, and there are so many that it was hard to figure them all out. Overall, expenses fall within the below categories:

Obviously, these are simple examples and you could add cheap supplements for pregnant female dogs to overnight stay at the vet practice. It’s hard to give an estimate because prices vary depending on your location, and how many items are on your list. Some breeds will de facto increase the grand total of expenses, for example English Bulldog breedings with almost always a c-sections.

When you take a hit and you spend a lot more than expected at a given time, be it before or after delivery, things get complicated. This is why dog breeders should always have at least $10,000 dollars in savings just in case. It’s generally left untouched but we want to be ready if need be.

Having Very Little Time For Yourself

Free time becomes seldom as soon as your female is confirmed as pregnant. Indeed, up until then you still had a lot to do (find a suitable stud, discuss with the breeder, organize the mating, health test, study pedigrees…) but you could spread that over the span of several weeks or months. Before the mating happens, you are still master of your own agenda, you are still controlling when you want to do what.

Once your female is pregnant, you lose that freedom. As soon as the female’s labor and delivery come close, you will spend every minute stressing about the mother and your new litter of puppies. She becomes your priority and she takes your calendar over:

All of this, and much more, takes time and is unpredictable.

Regardless of the size of your litter, you will love every single whelp and caring for them, monitoring their growth, nursing them; all of this takes a huge amount of time. Inexperienced breeders may even take more precautions, and they should, so being a dog breeder means pushing your own life to the sideline while you are caring for all of your furry family members.

Two-Faced People Who Secretly Want You to Fail

A year ago, if not more, we published an article about all the drama and politics you will inevitably come across when your breed and show your dogs. It went very viral, which for a dog breeding website is not really expected. Yet, it did get shared countless times.

Be smart and don’t fall into paranoia. Dog breeders are naturally surrounding themselves with fellow dog breeders, and a good part of them will want you to fail while appearing as your best friends or mentors.

For those of you who are not keen on showing their dogs, you will find similar characters and backstabbing people online. Message boards and Facebook Groups are rarely full of compliments once you showcase your work and success. Haters are going to hate, no matter what. Keep on moving, keep on studying, keep on learning, and yes, keep on breeding the best dogs you can.

People will talk negatively of your kennel in your neighborhood. For many, the breeding activity you are conducting is causing a stinky smell, or excess barking. Others will complain that your dogs are scary (especially if you breed large dogs.) Although these complications are not daily occurrences, they do become sources of anxiety and stress when they arise. Nobody wants to be causing any inconvenience to their neighbors, it could spoil the relationship for the next few years.

Taking Losses at Shows and Being Objective

Breeding dogs often comes with showing dogs. Dog breeders want to produce the best puppies and dog shows are an unbiased way to confirm the quality of a breeding program. Dog shows include conformation shows, trials, agility, and other dog sports.

And let me break it to you, for every winner, there are dozens of losers. Multiply that by several dog shows every day in most countries in the world, that makes an enormous number of losing dogs.

Participating matters but once you are there partaking, you do want to win and it hurts when you don’t. Because dog breeders put so much time, effort and money into their dogs and breeding programs, the devastation is huge and taken personally. Constructive feedbacks given by judges is often ignored or only considered once the frustration passed.

Is it worth participating in dog shows if we know we are going to lose? Yes, that shouldn’t hinder anybody who is interested in attending dog shows. Such frustration is a totally normal feeling and you simply get used to it with time. After a few losses, you stop dwelling and start focusing on what to improve to get better and eventually grab a win. Then a second one. Then a third. And so on.