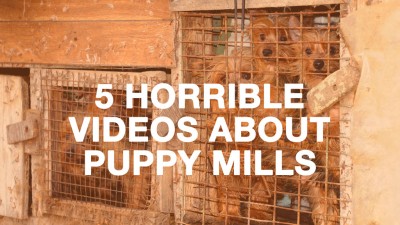 Thanks to undercover journalists, we can now see and know how many dodgy and greedy irresponsible dog breeders run their despicable business. Those puppy mills supply thousands of dogs to pet stores all around the country and no city is free of the garbage these puppy farmers represent. They starve, force-mate and neglect their dogs for the sole purpose of making money, they are a disgrace and I hope now you can see this, you will never buy your pets from stores but rather from a breeder to whom you will pay a visit or two before picking up your puppy.

In this video, the glamorous Charlize Theron narrates PETA’s much less glamorous undercover investigation, exposing where the cute little puppies you see at the pet store come from. Wounds, back-to-back breeding, rotting infections, starvation, this video is shocking.

Read our response to PETA, on a different topic.

NBC’s Jeff Rossen explains how little the American Kennel Club is doing to fight against the epidemic that puppy mills are. They expose some American Kennel Club breeders treating their dogs in disgusting conditions and make it clear than the AKC registration does not mean a quality kennel whatsoever. “It is just a piece of paper” even said Wayne Pacelle, President and Chief Executive Officer of The Humane Society of the United States.

Perhaps the National Kennel Clubs all around the world should randomly inspect dog breeders’ establishments and kennels and revoke the registration if the conditions have degraded. If they cannot do so, they should not ask potential buyers to trust the AKC label when the breeding standards are not always not met.

Coconut Is A Traumatised Dog Rescued From A Puppy Farm

Coconut lived for years in a puppy mill’s horrible conditions. Because of such a traumatizing experienced, once rescue, she was reacting, unlike any other family dog. Most of the time, she showed anger, nervousness, and aggressiveness whenever she was approached or touched.

After months of positive reinforcement, the ASPCA managed to transform Coconut, a poor traumatized dog into a social, caring and loving pet.

An Investigator Shows Us How Pet Stores Get Their Puppies

This video demonstrates a direct link from midwest puppy mills to reputable pet stores in New York. The sad part is that those very same pet stores pretend not to know how badly these poor animals are treated and even state that they have the Kennel Club registration papers. But these papers have never proven any proof of breeding quality, and they know it very well.

The Dog Whisperer – Inside Puppy Mills

A very sad special episode of The Dog Whisperer (National Geographic) about this horrible phenomena. They have led a long undercover investigation in these legal dog factories and show everybody how badly these animals are treated. Cesar Millan, the presenter, often says ‘No dog is too much for me to handle’ but this time, he found it hard to bear.

While many families buy their new companions from pet stores without knowingly condoning such disgusting methods of dog breeding, it is everybody’s duty to at least sign a petition against the unregulated sale of animals irresponsibly bred solely for financial profit.

Find here some great e-petitions that you can sign to make things change and move forward, for the better: