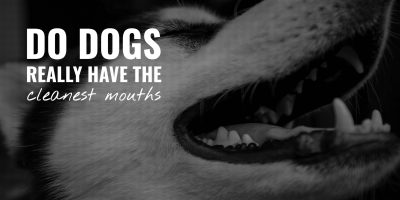 We’ve all heard dog lovers say that dogs have cleaner mouths than humans. While this idea might make dog owners feel better about receiving a heap of slobbery kisses, it may not be completely true. Scientists now know that the oral biomes of dogs and people can’t be compared fairly. So do dogs have the cleanest mouths?

The idea of dogs having the cleanest mouths is not something that can be proven or disproven with current research. While dogs have fewer types of oral bacteria than people, their dietary indiscretion and risk of periodontitis have an impact on their overall oral health.

Do Dogs Have Cleaner Mouths Than Humans?

Comparing a dog and a human’s oral biome is difficult. According to one study, only 16.4 percent of the bacteria in a dog’s mouth is also found in a human’s. Another study shows that a dog’s oral biome is more diverse than a human’s. Furthermore, dogs carry more than 600 types of bacteria in their mouths, while humans carry 615 or more. Just because a dog might carry fewer types of bacteria than a human, this does not reflect how clean their oral biome really is.

Furthermore, the bacteria in dog and human mouths are beneficial to them. This means that neither mouth is necessarily dirty, but instead works the way it is meant to. Good oral bacteria help to control bad bacteria as well as reducing bad breath. As such, eradicating all of the mouth’s bacteria can make you or your dog sick. At the same time, an overgrowth of oral bacteria can negatively impact both you and your dogs’ gut microbiome, leading to chronic illnesses such as IBD. This underlines the importance of keeping the oral biome balanced.

Are Dog Mouths the Cleanest in the World?

There is no research to suggest that a dog’s mouth is the cleanest in the world. It is difficult to compare a dog’s oral biome to another animal’s due to the environmental differences, and the difficulty in comparing the types of bacteria. It is also difficult to compare whether a dog’s mouth is cleaner than another animal’s as each individual is different.

While one dog might have a habit of eating poop and anything else they get their paws on, another dog might have their teeth brushed regularly and have a healthy, balanced diet. Similarly, an outdoor cat may prey upon animals and insects that carry diseases, while an indoor cat may have a healthy diet and regular veterinary check-ups. Comparing the dog with dietary indiscretion to the healthy indoor cat is near impossible on this basis alone. We also lack the information to compare dog oral biomes to other species’ due to a lack of research on the matter. This is because not every animal’s oral biome is well-researched yet.

Why Are Dog Mouths Dirtier?

Based on their natural oral biome alone, no comparison can be made between how clean a dog’s and human’s mouth is. However, we do know that dogs are at a greater risk of poor oral health. This is because dogs often practice dietary indiscretion, can’t brush their own teeth, and lick all kinds of surfaces.

They Can Eat Anything

Your dog probably tries to eat anything and everything they find. Depending on your dog’s habits, the food that they eat may have an impact on the cleanliness of their mouth. For example, dogs that eat a raw diet may contract salmonella, which can be given to humans. Salmonellosis is not common in dogs, but dogs can shed the bacteria in their stool and saliva. This allows it to spread to other pets and people in the household.

Similarly, you probably don’t want to let your dog kiss your face if your dog eats poop. According to research, dog poop may harbor pathogens like Campylobacter, E. coli, Giardia, and Cryptosporidium. So, a dog who regularly practices eating poop is going to have a dirtier mouth than a dog who does not eat poop. The poop of other animals can also transmit diseases and parasites to your pooch. For example, fox poop is known to transmit roundworms, which cause the disease toxocariasis. These are two main reasons that can impact how clean a dog’s mouth is.

Unlike people, dogs can’t choose to brush their teeth. While this does not mean that your dog’s mouth is naturally dirtier than yours, it does put your dog at a higher risk of periodontal disease. According to studies, up to 80 percent of dogs have some stage of periodontal disease by the age of three, partly because only 2 percent of dog owners regularly brush their dog’s teeth.

When dogs develop periodontal disease, specific types of bacteria take hold of your dog’s oral biome. These include Bacterioides fragilis, Porphyromonas salivosa, and Prevotella intermedia. Interestingly, some common human pathogens that are responsible for periodontitis, such as Haemophilus spp., are completely absent in dogs. This, once again, makes it difficult to accurately compare the canine oral biome to the human oral biome.

They Lick a Lot

Everyone has seen their dog lick something unidentifiable and most likely rancid off the sidewalk. Even if your dog has a healthy, balanced diet, any dog will lick something bad from time to time. This can cause your dog to pick up bacteria, viruses, and parasites that would not normally be in their mouth. Once these diseases are caught by your dog, they may be able to transmit them to you or other pets through their saliva. So, without regular cleaning, your dog may become sick or able to pass parasites on to you. Not good! To prevent this from happening, always do your best to stop your dog from eating or drinking strange substances when out on your daily walk.

You must keep your pet’s living space clean to prevent them from picking up bad bacteria from their environment. Make sure that you regularly wash your dog’s bed, clean their food and water bowls, and keep them well-groomed to prevent infections.

Can You Get Sick if Your Dog Licks You?

Some owners worry that their furry friend’s mouth is less clean than their own. In reality, it is difficult for a dog’s oral bacteria to survive in a human environment. This is because of the physiological differences between the two. Firstly, a dog’s saliva is less acidic than a human’s. Secondly, tooth brushing helps to remove any supra-gingival bacteria from the mouth. Lastly, canine oral bacteria would have to compete with human oral bacteria to survive. Good oral bacteria are already in place to help to neutralize the bad.

The main risk of letting a dog lick you is Capnocytophaga infection. Up to 74 percent of dogs carry Capnocytophaga, a bacterium naturally found in the dog’s oropharyngeal tract. For most people, this risk is not significant, but people with weak immune systems can become sick when infected. In most cases, Capnocytophaga is transmitted through bites or by licking an open wound. The signs and symptoms of this infection show up in three to 14 days after transmission and include blisters around the bite wound, fever, diarrhea, stomach pain, vomiting, confusion, and muscle pains.

So, do dogs have the cleanest mouths? We’re not sure. Research shows that the dog oral biome and the human oral biome cannot be compared fairly. This is because the two are vastly different from each other. However, some dogs might eat unsafe foods or poop, causing them to have dirtier mouths than other dogs.