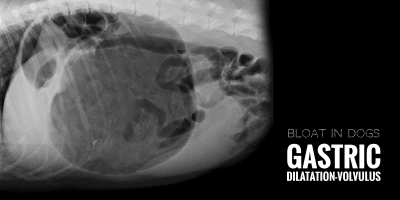 When not treated rapidly, gastric dilatation volvulus (GDV) is a life-threatening health condition predominantly found in deep-chested and giant dogs. Bloat in dogs is caused by the accumulation of air, gastric gas, and fluid, causing severe pressure from the swollen stomach to the other organs. Blood is streaming slower, and the stomach may even rotate on a different axis.

Bloat in dogs is somewhat of a mystery: scientists and veterinarians have not yet pinpointed the exact causes of bloat in dogs but they somewhat narrowed these down to a few now known triggers. These include heavy meals, exercising during digestion, and lack of fiber or water content within the meal.

Hopefully, this article will give you clear pointers and actionable tips on how to prevent gastric dilatation-volvulus in dogs, and if it’s too late, how to diagnose and treat bloat in dogs.

What is Gastric Dilatation Volvulus (Bloat) in Dogs?

Gastric Dilatation-Volvulus (GDV), or bloat, is a rapidly progressive health condition in dogs that is proven to be life-threatening if not properly treated. The condition is commonly associated with large meals wherein the food and digestive gas cause the stomach to dilate, rotate, or twist around its short axis. The pressure in the stomach begins to increase as a result of the stomach dilating and expanding.

Because of the immense pressure occurring in the dog’s stomach, the affected dog can suffer from a number of emergency conditions, including but not limited to the following:

Because of the severe pain inflicted by such conditions, dogs may experience a shock, and even collapse. Treatment for this condition primarily involves the stabilization of the dog, decompression of the stomach, and surgery to permanently return the stomach to its normal position. At the time of surgery, damage to the abdominal organs will be evaluated and appropriately treated.

A quick diagnosis of bloat or stomach dilation in dogs is necessary to prevent the symptoms from worsening. There are quite a few diagnostic tools that can be used by a veterinarian to assess your dog’s bloat condition.

First off, monitoring the pulse is the first and the most basic way of diagnosing bloat because dogs suffering from stomach dilation usually have a very weak pulse. Then, the physical examination usually shows signs of enlarged abdomen for which your dog might be suffering from mild to severe pain. However, the more inclusive the test, the better is the assessment of the overall physical condition of your furry one because bloat negatively affects a dog’s overall health in more than one way. Finally, there are other tests helping the diagnosis of bloat in dogs, including blood glucose test, complete blood count, blood electrolytes, serum chemistry, and coagulation assays.

These tests are meant to find out if there is pooling of blood or how well the blood circulation is. The diagnostic tests also reveal the evidence of bacterial sepsis, metabolic abnormalities, cell damages, secondary organ injury and the presence of accompanying diseases, if any.

With all these, a urinalysis and a blood gas analysis may also be performed. The latter enables assessing the nature and severity of the compromised respiratory system. An electrocardiogram (ECG) will most often be used as a diagnostic tool to evaluate the presence of heart arrhythmias (the term used to describe a group of cardiac conditions in which the heartbeat is irregular, too fast, or too slow).

Gastric Dilation-Volvulus or Bloat in dogs is a serious condition that can even lead to death if not treated properly at the right time. While the exact causes of bloat continue to be a matter of medical speculation, certain breeds are found to be more susceptible to this life-threatening condition.

Obviously, the genetic factor is important but apart from this clear factor, the shape of certain dog breeds makes them at higher risk of being affected by GDV. Dogs with deep and narrow chests are found to be more prone to bloat. Accordingly, certain breeds can be categorized as having high chances of being affected by stomach dilation. Here goes the list of breeds most prone to bloat:

The owners of these breeds, as mentioned here, should take extra care to look for symptoms of bloat in their dogs and initiate immediate medical attention before the condition worsens.

Causes of Bloat in Dogs

While the causes of GDV are unfortunately unknown for now, several studies (1, 2, 3) have shown a variety of factors common to dogs diagnosed with the condition. Bloat in dogs is primarily caused by the unusual and abnormal accumulation of air, gas, fluid or foam in the stomach. Gastric dilation can be severe enough to induce sudden swelling of your dog’s stomach, which can even rotate 90 to 360 degrees. The twisting further blocks the blood circulation traps the accumulated gas and often leads to shock and damage to the internal organs of your dog.

Dogs that have a family history of GDV have been shown to be at a much higher risk, so are large and giant-breed dogs (especially deep-chested breeds such as Great Danes, German Shepherds, Weimaraners, St. Bernards, Irish Setters, and Gordon Setters). Older dogs are also more at risk, although GDV has been reported with puppies. Dogs that are fed single large meals daily are also at risk. Excessive amounts of food or water and too much activity after eating may also contribute to the development of GDV. It should be noted that while dogs affected by GDV may have a history with gastrointestinal tract problems, it does not apply to all cases. Also, consistent stress can be an important factor behind bloat in dogs.

Treatment of Bloat in Dogs

Bloat in dogs is a serious condition that requires immediate medical treatment. Since bloat leads to the twisted stomach and restricted blood circulation throughout the entire body of your dog, the treatment is primarily meant to resolve the shock and decompress the bloated position. The devitalized stomach may even be surgically removed or its position corrected, depending on the severity of the condition and its already spreading impact.

As for the procedure of the treatment, the first thing a veterinarian surgeon does is to prepare for emergency surgery. Intravenous catheters are placed and the dog is given enough fluids to recover from the hypovolemic shock and possible dehydration.

Afterward, orogastric intubation is executed by putting a tube through your dog’s mouth right into his/her stomach to release the accumulated gas. Another procedure called percutaneous trocarization is also considered to be a rightful treatment. In this process, the abdominal entry site on the left side of the dog’s belly is clipped and cleaning to make way for a large needle that is inserted into his stomach. The effect is immediate with the foul-smelling gas coming out with a hissing sound, much like the popping of a balloon.

In situations where the dog’s stomach has already rotated, it might even be necessary to remove the spleen. Another procedure called gastropexy becomes impending in such cases to prevent the chances of recurrent dilation or torsion. The process involves tacking or suturing the stomach to the abdominal wall and it is highly recommended as a step to prevent bloat in the breeds that are extremely susceptible to this condition.

Following any of these surgeries, your dog must be kept in the hospital under medical observation for several days, generally 2 to 5. This will enable monitoring chances of heart arrhythmias, which usually occurs within the first 36 hours after surgery. Upon release, the veterinary clinic should give you clear instructions and guidelines on the feeding and exercise of your dog for the following days, weeks, and even years to come.

How To Prevent Bloat in Dogs

Bloating is serious enough to cause death and certain breeds like German Shepherds and Boxers are more prone to being affected by bloat. However, there are a few precautionary ways in which you can prevent the occurrence of this deadly condition in your dog and these are:

Apart from these general prevention techniques, you can also adopt a few food tactics to ensure prevention of bloat in your furry one: