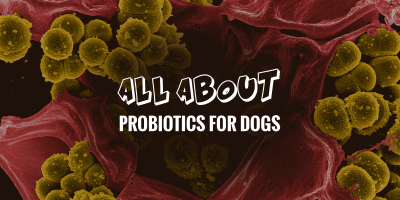 Probiotics for dogs are rising in popularity thanks to observable positive effects on our dogs’ health. However, there is a confusion on what dog owners can expect from canine probiotics and how beneficial they can be in the short, but also long term.

Probiotics for dogs are not a miracle, but they are indeed very useful and recommended.

In this article, we are answering the most common questions about dog probiotics and keep everything as factual as possible by citing studies and sources when suitable. We have not been sponsored by any manufacturer and we remain unbiased, as always.

What exactly are probiotics for dogs?

Probiotics are living microbes that make up the gastrointestinal tract and support a healthy immune system. Such strains of bacteria, or good bacteria, in the canine gut help in the absorption of nutrients in the colon. These good bacteria help keep bad bacteria like E Coli from increasing to unsafe or sickness causing levels.

Dogs have the shortest digestive system of all mammals. Digestion in dogs takes an average of six to eight hours compared to twenty to thirty hours for a human. The process of food being broken down into its component parts and being absorbed in the small intestines starts in the mouth where the salivary glands work with the teeth to begin the process of foodstuffs being converted to blood glucose, vitamins, and minerals.

The stomach of the dog is more acidic than the human stomach. In fact, initially, the efficacy of probiotics was doubted because veterinarians were skeptical of bacterial strains being able to survive in the harsh acid of the dog’s stomach. Various methods of protecting the strains of bacteria from the stomach acid were employed such as putting bacteria inside of capsules so that they were degraded only upon reaching their final resting spot in the large intestine. The various types of pastes, powders and the like have been developed as a way to ensure that the probiotic colonizes the large intestine, and is not destroyed en route.

What are the different types of probiotics?

The strains are specific for canines, and include the following:

Probiotics are delivered in a powdered form, a capsule or prepared as part of homemade kefir. Probiotics are normally delivered as living bacterias, especially in capsules or kefir, but they can also be given to dogs as dead bacterias generally in powdered forms. Living probiotics are thought to be more efficient than dead ones, but we could not find any conclusive study to back this claim up. 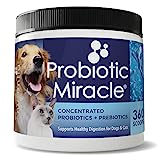 What are the differences between probiotics and digestive enzymes for dogs?

Digestive enzymes are produced by the pancreas. Such enzymes are a type of protein that are specifically encoded to break down food so that it may be further metabolized by the body.

There are four kinds of digestive enzymes that break down fats, proteins, carbohydrates, and fiber. Specifically, they are:

These enzymes are secreted by the pancreas and break down food in the small intestine where they are absorbed. Digestive enzymes actually can kill probiotics. In order for probiotics to work effectively, they must make it alive to the large intestine or colon. Digestive enzymes are created by the body of the dog and are not a living organism like probiotics. They are sometimes added to a dog’s diet to help a dog break down and process food in a smoother fashion.

How often to give probiotics to a dog?

Daily supplementation of probiotics is recommended for dogs, and is especially recommended when a dog is completing a course of antibiotics, has had diarrhea, or is facing unusual stress. There are various modes of delivery for probiotics including powders and capsules, but there have been some reports of supplements not containing what they purport to contain.

Probiotics are living organisms and can be killed by exposure to stomach acids, and extreme temperatures. Prebiotics are a necessary delivery system that will ensure the probiotics arrive safely in the dog’s colon. A common prebiotic is acacia gum or inulin (a starchy fiber). Prebiotics should be given with or just before the probiotic to ensure optimal assimilation and digestion of these.

There has not been enough research done on the efficacy of probiotics in healthy dogs. A review of the literature has detailed some of the limitations in doing the research in the area. Unlike prescribed medication, pro- and prebiotic supplements do not have a regulatory body that guarantees that a product contains what it purports to contain. In fact, the contrary has been found to be true. This seems to be worrying and therefore would encourage most dog owners to prepare their probiotic solutions themselves.

Are probiotics good for dogs with allergies? Can probiotics for dogs help with itchiness and skin problems?

Some studies have suggested that probiotics help dogs with allergy problems. Allergies are an over-response of the immune system. There is some research that has shown that probiotics reduce the symptoms of atopic dermatitis. Symptoms include itchiness, red skin, frequent ear infections, and generalized abdominal problems like gas, abdominal distention, and diarrhea (“leaky gut syndrome”).

Dogs like human beings do suffer from inflammatory bowel disease. This disease is characterized by alternating constipation and diarrhea. It can flare up in times of stress, and in dogs prone to food allergies (like Labradors for example) it can worsen if a diet is too high in wheat or soy. Probiotics have shown to be useful in humans in the remediation of IBD, and, at least the anecdotal evidence supports canine probiotics in relieving its symptoms.

Is yogurt a safe probiotic for dogs? Are human probiotics safe for dogs?

The strains of bacteria in the human gut differ from the canine. Yogurt typically has live cultures of bacteria that do not harm dogs but won’t particularly help them either. Yogurt is not an effective way to deliver the right kinds of bacteria for your dog. It doesn’t make sense to feed yogurt to your dog. The better thing to do is to talk to your veterinarian, and buy a canine-specific supplement. The brand should be one that has some independent lab testing that has verified that the strains are in the supplement and are living strains. Some sources recommend kefir as a good supplement for dogs.

What probiotics are available on the market? 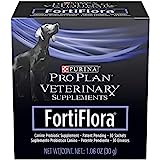 The top 3 most popular probiotics for dogs sold online are:

The powdered form of canine probiotic is definitely the cheaper alternative. Some commentators believe that dead bacteria found in the powdered probiotics can be replicated in the colon thanks to the genetic markers being sufficient for the colon to regenerate living strains within itself. Other specialists say that probiotics should only contain live bacterias with be useful. We’ll let you choose who to believe on this one, as no further conclusive research has been done.

What is a good recipe of Kefir for dogs?

Daily supplementation of probiotics can get pricey especially if a household has more than one dog. The internet has several good recipes for doing it yourself probiotics. Dogs many times are not able to digest cow’s milk since they lack the digestive enzymes that break down milk sugar (lactose). Goat’s milk is the alternative most often suggested as the reasonably priced alternative. The following recipe can be used to make some homemade probiotic

The ingredients you would need to prepare Kefir at home are as follows:

Then, follow these instructions to make your homemade kefir that will be packed with healthy probiotics for dogs: