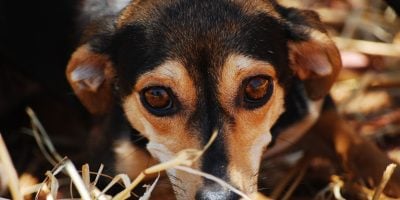 As a pet owner, wondering whether can dogs have panic attacks is completely normal. And if possible, we would also like to know how to help them in case they have an episode.

Therefore, to help you learn more about panic attacks among dogs, this article discusses dog panic attacks, their causes, signs, and ways to help them during a panic attack.

Can Dogs Have Panic Attacks?

Dogs, like humans, can also have panic attacks. According to Erin Askeland, an animal health and behavior expert at Camp Bow Wow, dogs can also have a sudden feeling of intense fear and anxiety. Based on the study by Salonen et al. (2020), 72.5% of the dogs surveyed portrayed anxiety-like behaviors. The researchers studied the behavior of 13,715 dogs, composed of 264 breeds from Finland.

Moreover, their study concluded that the prevalence of anxiety or panic attacks is related to the dog’s age. This means older dogs have a higher possibility of experiencing an attack. However, dog anxiety and panic attacks are still two different things.

In addition, animal health experts said that dogs also portray the physical responses caused by panic attacks. Just like humans, dogs can have an increased heart rate, rapid breathing, shaking, and loss of appetite during their panic attacks.

An example where dogs can have panic attacks is during fireworks shows. Since dogs are sensitive to loud noises, the simultaneous playing of fireworks causes them to panic. Thus, they display the behaviors of barking, running away, hiding, panting, and whining.

Moving forward, to further understand panic attacks in dogs, below are the most common causes of their attacks:

According to this article about dogs’ panic attacks, it was stated that different types of anxiety mostly cause their attacks. Some of these are travel anxiety, noise anxiety, and confinement anxiety. Moreover, an occasional stressful environment can also be a cause.

Based on the statement by Askeland, chronic stress is the most common cause of panic attacks among dogs. In a research study by Beerda et al. (1998), chronic and acute stress can result from loud noises, moving to a new environment, being alone at home, and poor housing conditions.

Here are some of the signs that your dog is stressed:

As mentioned previously, dogs are very sensitive to loud noises. Thus, the majority of them have noise anxieties. It was also mentioned in the study by Salonen et al. (2020) that 32% of the dogs surveyed have noise sensitivity or have a history of fear caused by noises.

Loud noises like fireworks, thunder, and large speakers cause panic since dogs perceive these noises as a threat, triggering their fight or flight response. The unpredictability of loud noises also contributes to a dog’s panic attack.

Dogs with confinement anxiety experience extreme fear and panic when confined in a small space with no visible exits. Confinement anxiety can result in injuries since a dog will try to escape the room as much as possible – not minding whether they get injured. Here are some of the situations that can trigger your dog’s confinement anxiety:

According to the study by Mariti et al. (2012), dogs who are not used to traveling ever since they were puppies are most likely to have traveling anxiety. In addition, dogs who use cars to visit veterinary clinics are also more prone to negative perceptions of cars.

For example, every time they go to a car, they automatically assume that they are going to the vet – thus, resulting in a reluctance to travel.

All in all, if you notice that your dog is having frequent episodes of panic attacks, it is best to have them checked by your veterinarian. In the vet clinic, your dog will undergo laboratory and physical examinations to know whether an underlying medical issue or concern causes their panic attacks.

Dog anxiety and panic attacks can be confusing because of their similar symptoms and effects. However, they still have distinct aspects that make them different from each other.

The main difference between anxiety and panic attacks is: that anxiety pertains to almost persistent feelings of fear and worry. Meanwhile, panic attacks are short bursts of panic that usually go away after the stressor or trigger is gone.

For example, a dog having a panic attack because of the presence of a lot of people will find itself calmer or better after the event is done. Meanwhile, anxiety refers to fearing a “specific event or situation” – this situation can be real or just perceived.

And as mentioned, anxieties such as noise, confinement, separation, and traveling are usually the root of a dog’s panic episodes. Lastly, to ensure whether your dog is experiencing an anxiety or panic attack, paying a visit to your respective veterinarian is recommended.

You should also take note of the important details or history of your dog’s episode to help the vet identify the diagnosis.

Signs of Panic Attacks in Dogs

To decrease the chances of having a severe panic attack, here are the signs owners should look out for to know if their dog is experiencing a panic attack:

Remember that these are the most common signs observed among dogs experiencing panic attacks, and there can be other symptoms besides the abovementioned ones. In addition, if the signs of panic attacks get extremely threatening and dangerous, going to the vet is highly recommended.

How to Help a Dog Having a Panic Attack

What can we do in case our dog experiences a panic attack? Below are the top practices proved to calm a dog’s panic attack. Some of these practices can also help in preventing future episodes.

One of the best ways to stop or prevent panic attacks is ensuring that your dog is getting enough physical activities. According to this article by Fitzroy Vet Hospital, exercising helps your dog be happier and entertained – resulting in lower chances of panic attacks.

In addition, giving your dog puzzle toys that can improve their mental stimulation can also contribute to preventing panic and anxiety attacks. Allotting at least 20 to 30 minutes for daily mental and physical activities is very important.

Based on this article by Barrington (n.d), there are dog treats with beneficial vitamins that have been shown to reduce anxiety. Melatonin, thiamin, chamomile, L-theanine, or L-tryptophan are frequently found in them. Some also contain ginger to soothe sensitive stomachs. These are frequently suggested for anxiety in general and traveling.

Moreover, probiotics, which are good for a dog’s digestive health, help prevent panic effects like diarrhea and vomiting.

Giving your dog interactive toys can also help them during their panic episodes. By giving them a toy, they can have something to focus their mind on aside from the thing or event that is triggering their panic attacks.

Moving your dog to a safe and quiet space during their attack is also one of the most effective ways to control the situation – especially if the cause of the panic attack is loud noises and a large crowd.

It is also better if your dog has their own ready-made safe space. Their safe space comprises their favorite toys, comfortable sheets and pillows, and their go-to treats. With that, your dog knows that they have an “escape place” that can make them feel better in stressful scenarios.

Researchers have found that cuddling your pets has psychological benefits for both the pet and the owner. Since cuddling helps reduce cortisol levels, it is guaranteed that this activity will make your dog feel happier and less anxious. This activity also makes them feel safe and comfortable. Giving enough time and attention to your dog can also prevent or get rid of depression.

Punishing your dog will do more harm than good. For example, yelling, caging, using a shock collar, and threatening your dog during their panic attacks to correct their behavior will only make their situation worse. This practice will only contribute to your dog’s anxiety and fear. With that, it is best to use a gentle approach.

Remove the Source of Fear

As mentioned earlier, panic attacks among dogs are often caused by their fight or flight response. Thus, removing the source of fear or their trigger will help handle their panic attacks. For example, if your dog’s panic is caused by the presence of several strangers or new people, it is best to move your dog to a less crowded room.

To summarize, dogs, like humans, can also have panic attacks that are often caused by anxiety like traveling, confinement, and loud noises. Plus, chronic stress also contributes to their chance of having a panic attack.