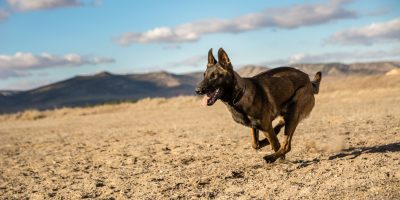 If you live with a dog, you probably caught them running in circles at some point. Witnessing this for the first time, it is understandable if your first reaction is distress or panic. Don’t drag them to the vet immediately — a dog running in circles is normal behavior, so do not be alarmed.

For those wondering why dogs run in circles, you can find out the answer below. We tried our utmost to back up all claims by citing studies and appropriate research.

Why Do Dogs Run In Circles?

Most pet parents are more than familiar with the sudden explosive burst of energy their four-legged pal experiences. Your dog frantically runs in circles, and at first glance, it might seem like they are going crazy. These intense energy bursts are called zoomies.

Dog zoomies, or Frenetic Random Activity Period (FRAP), are unmistakable explosions of energy dogs occasionally have. They are typically frantic, repetitive dog behavior such as spinning around or running in circles. A common cause of zoomies is a buildup of excess energy that dogs hold onto, which they would release in one explosive outburst.

If you see your puppy running in circles in your living room or backyard, do not worry. As long as they are not injuring themselves, they are safe.

7 Reasons Why Dogs Run In Circles

Playful and jolly by nature, you may have caught your dog running in circles around himself in an attempt to capture their elusive tail. You probably wondered at some point, “why do dogs run in circles?” Is it because they are excited or bored? Or is there a deeper reason?

There are several possibilities as to why your furry best friend does it! To elaborate further, here are seven main reasons why that tail suddenly seems so appealing to your pet!

Watching your furry friend circle the living room might seem adorable, but if he’s doing it to vie for attention, it might be best not to indulge them.

Dogs respond to any kind of attention from their owners, regardless of whether it’s positive or negative. So, the next time they do it to become your object of affection, try your best to ignore it. It will likely make them stop.

Humans get antsy when they get bored, and dogs are no different. If they do not get enough stimulation or exercise, there is a possibility they will run in circles out of frustration. They do this to expel some pent-up energy.

If your dog is still a little puppy, then there is a good chance that this behavior will fade as they age.

The breed can affect why your dogs always run in circles. Like Bull Terriers and German Shepherds, certain dog breeds are more likely to attack their tails. These breeds tend to like spinning and whirling much more than others.

On certain occasions, they might go a little far and end up chewing or biting their tails. This could lead to hair loss or injury, so it is best to watch them whenever they circle around.

Few dogs engage in behaviors such as running in circles because of compulsive disorders that compel them to act strangely. A perfect example of this disorder is OCD. Tail chasing is one way in which the condition presents itself.

Distemper is a viral and contagious disease that is caused by the paramyxovirus. It attacks the dog’s brain cells. Seizures, which generally consist of running in circles before they fall over, are among its symptoms.

Only a doctor can diagnose and treat distemper in dogs. Bring them to a vet immediately if they run in erratic circles.

A dog runs in circles when excited, like when given a special treat or taken to the park. They may twirl or circle around you when you bring their leash out to show them. It is also a common reaction when you come home from work or school.

Dogs have multiple ways of showing their excitement. Running in circles is just one that helps them burn off a little adrenaline.

Dogs chasing their tails seem cute and harmless. That may be true for young pups, but it is a whole new story for older dogs. If your furry pet is on the older side and seems to have taken running in circles more often, there might be a more sinister reason lurking underneath.

It might be because of fleas and worms or an injury to their tail. If this were the case, then your dog is chasing its tail to find a way to feel more comfortable.

When Do Zoomies Happen

Zoomies can happen at any time of the day or night. It is most common after your pet has had a long nap or when it has been alone all day. It can also happen after stressful situations like veterinary visits. Although it is typically a buildup of excess energy, there are few occasions when it occurs before going to bed and during training.

When they know they are about to undergo a more extended rest period, your dog sometimes tries to blow off some leftover steam before going to bed through zoomies. Also, there are times when your dog experiences a buildup of nervous energy if they do not get what you are trying to teach them during training.

Zoomies are not a cause of alarm. They are normal dog behavior — meaning they are not generally dangerous. However, your pups are prone to some occasional injuries here and there, especially with older dogs.

The environment is probably the biggest danger they could encounter. It is essential to ensure that your dog does not go near stairs or into slippery floors when they zoom since it creates dangerous situations for them.

If you notice that your dog displays weird or odd behavior like strange eye movements or excessive circling and bumping into things, it would be best to bring them to the vet to ensure that they do not have neurological issues.

Take a video of your dog’s odd behavior to show the vet for better reference. They would be able to tell if it is normal behavior or not.

How to Stop Your Dog From Getting Zoomies

You don’t need to be overly concerned or worried if you catch your dog doing the occasional zoomies. It is, after all, normal behavior for your furry friend. If you do want to decrease the number of zoomies your dog gets, here are a few suggestions you can follow:

Start by giving your dog enough physical exercise. You can take your pet on several walks a day or by having them jog with you every morning. Playing with them in your yard for a few hours is also a good activity — this serves two purposes: bonding with them and reducing their zoomies.

Another good way to lessen their zoomies is by stimulating their mind. Have them engage in fun mental challenges like puzzle games or mental stimulation toys. These activities can help your pup get all their nervous energy out.

You may also enroll your pup in dog agility training. It would help your dog relieve stress and drain some excess energy.

Have your dog undergo basic obedience training. You can start with a basic program to set a foundation before training them. You can use toys, treats, and positive reinforcement to help reduce your dog’s zoomies.

Socialize Your Dog With Other Dogs

Lastly, let them socialize with other dogs. It is best to start socializing when they are still pups, so they can grow accustomed to it as they grow old.

Many pets, including dogs, tend to chase after their tail or run around in circles every now and then. This outburst of energy is called “zoomies,” and you don’t have to panic if you catch them doing this. Only consider taking them to the vet if they have constant and frequent zoomies. It is a potential sign of a more significant behavioral problem, so it would be wise to keep tabs on how often they do this.