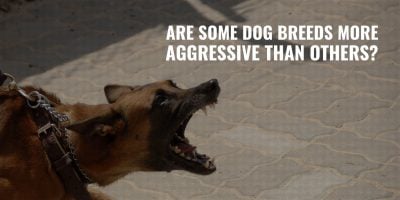 Stereotypes exist in media and through assumptions that some dog breeds more aggressive than others, but is there any truth behind these claims? Or are these just social norms influencing our perception of different dog breeds? Many people ask these questions often, but rarely will you find a direct and non-biased answer.

Furthermore, if there are more aggressive dog breeds does that mean they are always more dangerous? Or can their aggression be easily combated? We will explore and answer all of these questions honestly and without bias so you can learn the facts.

The American Veterinary Medical Association (AVMA) published a literature review titled “Dog Bite Risk and Prevention: The Role of Breed”. They conclude that there are some breeds that are more highly represented in reported biting incidents. These include the:

The writers obviously reflect on the fact that these numbers may indicate that these are more aggressive breeds and have a possible higher tendency to bite. However, they also discuss that the increased numbers may be related to the popularity of the breeds used in their sample as opposed to their nature. For example, they mentioned that Canada’s highest attack numbers were caused by Siberian Huskies due to their popularity in the region.

Furthermore, they mention that owner’s treatment due to public perception may have influenced the bite rate. Many Pit Bull types are purchased for the use of dog fighting because of medias perception, therefore, there is an increased likelihood that their owners may be bitten as they encourage the dog’s aggression. They actually noted that behaviorally assessments along with owner filled in questionnaires found the most aggressive dog breeds to be small to medium-sized dogs. They conclude that these bites may be more frequent but are not reported as often because they cause minor injuries.

Is There a Link Between Dog Aggression and Breed?

Dog aggression can be linked to breed type, but it is also related to many other factors. Aggression is influenced by environmental and genetic factors. Some dog breeds have been specifically bred to have a stronger aggressive instinct for fighting, guarding, or hunting. Other breeds may have aggression inadvertently selectively bred into their genetics. This can occur when two individuals are mated for one desired trait, such as long fur, and they both happen to be aggressive. This causes the offspring to have more aggressive instincts. This biological input is what can lead to a more aggressive breed or even an individual.

Environmental influence also causes a dog to behave aggressively. This may have had past influence over dog aggression in a breed, such as working use or environment. Owners of ratting dogs will encourage them to attack small animals and either bite firmly or kill them. These individuals then develop more aggression in nature which can cause their offspring to have heightened aggression levels as well. However, individuals can also have their aggression minimized through environmental influence, such as training and patience. In summary, the creation of a breed is influenced by nature and nurture. This leads to their innate aggression levels.

The perception of some breeds being aggressive has influenced their purchase numbers in many different countries. From potential owners avoiding buying some breeds to dog fighters searching them out. Even dog shelters may have higher numbers of breeds deemed more aggressive and may struggle to re-home them. From a Pit Bull type to a large breed like a German Shepherd.

The first breed that comes to mind is a Pit Bull type dog. These have been deemed illegal in some countries because of their high perceived aggression. However, just because a dog is a Pit Bull type it does not classify them to be an aggressive dog. Every dog has the capability to be a great dog for the right owner. From their parents’ aggression levels to the way they have been raised and trained. Some dogs require more patience and training to achieve these goals, and some breeds may require the same. That, however, should not mean they are dismissed. As some breeds deemed aggressive form stronger family bonds with humans than those not deemed so. Therefore, you may be missing out on a wonderful and loving dog when the truth is, every dog requires patience and training, just in different areas.

Dogs that are Prone to Aggression

According to the literature review of the AVMA, the following two types of dogs are prone to be more aggressive.

The AVMA found that smaller breeds are more likely to bite than larger breeds. However, if this is the case, you may be wondering why this isn’t always accurately represented in the media. It’s because of the potential damage a large dog can cause as opposed to a small breed. If a dog with a strong jaw chooses to bite you, you can receive potential life-altering impairments. On the other hand, a small dog could bite you and not even break the skin, depending on the breed. Often, the media portrayal of dog aggression is not linked to their personality, but their capabilities to cause harm.

You may wonder why smaller dog breeds can be more aggressive than larger breeds. Disregarding individual breed differences from selective breeding, smaller dogs often experience little dog syndrome. Researchers categorize this as a behavior exhibited in smaller dog breeds where they display more aggression more quickly when they feel vulnerable. This is because they are trying to present themselves as more threatening to protect themselves. This has given smaller breeds more aggressive tendencies and led them to often biting first and barking later. So with little dogs, be careful with your fingers. They can be very loving and gentle dogs, but little dog syndrome is very common and can be something that requires training.

Dogs that are More Familiar

This may be surprising, but it was also discovered that dogs that are familiar with you are more likely to bite you than dogs you have never met. Many owners assume it would be the other way around. The reason that familiar dogs show more aggression towards their owners than new dogs is because they have already set boundaries with you. Therefore, if they feel their boundaries are crossed, they are more likely to feel a need to show firm boundaries. Furthermore, owners will be spending more time with their dogs, possibly aggravating them for a long period of time without knowing.

Dogs will regularly show warning signs that humans misinterpret. From your dog displaying whale eyes to ‘smiling’ owners often do not realize that this is our dogs telling us they are unhappy and need space. Continued interaction can quickly lead to a dog snapping, which is why your dogs are more likely to bite you than strange dogs because of increased interaction. Check out the dog aggression ladder which indicates mild signs of upset to major. Understanding these behaviors can prevent or minimize your chances of being bitten by a dog.

Personality Traits of the Dog

Some puppies may be born with a personality with more aggression, however, it can grow from different traits. Dogs that are more timid and are more likely to snap at their owners or other animals when overwhelmed. Perhaps because they are not well socialized when they are young. On the other hand, a dog that is over-excitable could cause a situation which may lead to aggression. For example, if a dog is jumping all over someone and when pushing them you push their face, they may become aggressive and bite. So although aggression may be a trait in a dog’s personality by itself, it is usually derived from others.

Are Some Dog Breeds More Aggressive than Others – FAQs

We have researched all about dog breed traits and aggression so we can further answer any other questions that you may have.

Are any Dog Breeds Naturally Aggressive?

Some dog breeds have more instinctual aggression than other breeds. However, that does not mean humans should condemn every dog of that breed to be aggressive. Nor does it mean that this breed cannot be a wonderful pet. When breeders selectively breed dogs for a purpose, such as dog fighting, they will possess the traits their breeder’s desires. In this case, dogs bred for fighting will have heightened aggression.

However, heightened aggression can also occur naturally and indirectly with breeding. Breeders may have attempted to selectively breed two dogs for a certain trait, such as folded ears, these individuals may have also been aggressive. Although this wasn’t the desired trait, it still became prominent in the litter. Therefore, some breeds have gained natural aggression through breeding without an intended purpose.

Do Some Dog Breeds Bite More Than Others?

As concluded by the literature review from AVMA, smaller dogs, and those that are familiar will often bite more.

Smaller dogs are more likely to bite because of little dog syndrome, a behavioral response to feeling vulnerable. It works as a physical defense against possible harm. Whereas familiar dogs are more likely to bite because of missed dog-specific social cues and more time interactions between them. People often misinterpret dog social cues of stress and fear. A smile from a dog displays extreme stress as opposed to our interpretation of a smile indicating joy. After time a dog’s aggression will increase because of ignored social cues.

What Breed of Dog Bites the Most Often?

A study published in 2019 found that mixed dog breeds bit the most often in America. However, every area differs based on popularity of dog breeds alongside what working dogs are most commonly required. For example, in a state where farming is common, there is a likelihood of Border Collies having a higher biting percentage in that region. Basically, there is not one dog breed you should be wary of because every dog breed has their pros and cons. More so, every dog has the potential to be well trained and not aggressive.

Dog aggression is partly genetic and partly environmental. Aggression is a trait that can be passed down from parent to puppy. It can also be amplified when both parents have aggression. After generations, the aggression can multiply if the mating is always between two aggressive parents. However, it is important to remember that the environment not only influences a dog’s aggression level, whether it be to increase or decrease it, but does so more than genetics. Behaviorists generally agree that dogs will form a trait through 40% genetic influence and 60% environmental influence.

In conclusion, some dog breeds are more aggressive than others. However, every dog is their own individual, you cannot assume their aggression nor write them off for their breed. Every dog has the capability to be a wonderful pet. Remember to train them, introduce them gradually to new stimuli, and be aware of the dog aggression ladder.