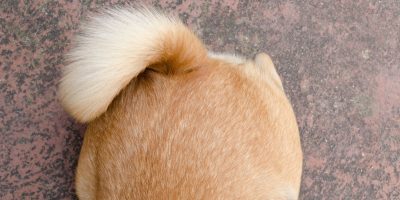 Having a tail is important in the anatomy of canines. As dog owners, we see a variety of dog tails. For starters, some dogs have short fluffy tails whereas others have long pointed ones. Also, dog tails seem to look very flexible. Well, some dogs happen to wag, tuck or point their tails.

Further, a Canine’s tail can move in different directions. So, that left us dog owners to be curious. The real question is, what are dogs’ tails made of? Is it pure fluff, or, is there some bone in it? To ease your curiosity, check out this article.

What Is a Dog's Tail Made Of?

According to Matthew McCarthy, a dog’s tail is composed of bones from the Juniper Valley Animal Hospital. Specifically, it’s an extension of their spinal cord covered in muscles, skin, nerves, and tendons. He also added that dogs could wag their tails because of their muscles.

A dog’s tail is flexible. Well, that is because those tail bones have cartilage between them. Moreover, the cartilage acts as a connective tissue that supports the joint movement. Hence, dogs can wag, shake and even bend their tails without breaking them.

Further, a full-grown dog’s tail anatomy may consist of 6 to 23 vertebrae. Yet, the number of bones in the tail varies depending on the dog breed. For instance, breeds such as Bulldogs have only 6 to 13 coccygeal vertebrae. Whereas dogs like German shepherds have 18 to 23 vertebrae in their tails.

It is a known fact that dogs have bones in their tails. Yet, some canines seem to have none since they appear to have no tails at all. Hence, if you want to know more about them, check out the different types of dog tails listed below.

A study regarding a dog’s tail genetics found out that dogs with short or bobbed tails had a genetic mutation in their protein production. According to the results, the mutation was first detected on a Pembroke Welsh Corgi. Moreover, certain dogs carrying the mutated gene will have naturally short tails or even no tails.

Meanwhile, in contrast to bobbed tails, some dogs also undergo surgical docking to shorten their tails. Also, Pedigree stated that docked tails occurred before as rabies prevention. Further, owners began to shorten their dog’s tails to adhere to breed standards.

According to VCA Animal Hospital, corkscrew or ringed tails in dogs is a result of genetic malformation of bones. Moreover, they added that affected dogs suffer an abnormal tail structure. Also, breeds such as Pugs, French Bulldogs, and Boston Terriers have corkscrew-shaped tails.

Twisted dog tail anatomies are more prone to infections. Further, Hobart Animal Clinic explained that corkscrew tails are not exposed to light and air conditions. Thus, it can be a place where some germs and bacteria grow. Also, that area can be so itchy that it has to be surgically removed by veterinarians.

Among the different tail shapes is the Otter tail. Vet Organics expressed that otter tail is rampant in dogs with dense and rounded tails. Also, dogs with otter-shaped tails are Labrador Retrievers and Otterhounds. Further, otter tails in dogs act as a rudder that aids in swimming.

Moreover, an otter’s tail, like the name itself, looks like the animal’s tail. Yet, dogs only have it longer. According to Iffat Kawsar, DVM, an otter tail is one of the most common dog’s tail anatomy. Further, a tail like that has fur that’s parted on the sides.

A whipped tail is also known as a Carrot tail. Moreover, dogs with this tail type have a thick tail base that ends with a narrow end. Well, like its name, that tail looks like a vegetable, a carrot. According to Hepper, whip tails are quite longer than bobbed tails.

What Are Dog Tails For?

A dog’s tail is made of small bones connected by cartilages, muscles, nerves, and tendons. Though, as humans, we see dog tails as ordinary. Yet, to dogs, their tails are very useful. Thus, take a look at the different functions of tails listed below.

National Geographic stated that dogs talk through their tails. For instance, a wagging tail communicates happiness. Whereas a tucked tail may indicate submissiveness. Hence, a dog expert, Monique Udell said that dog tails are crucial in animal communication. But, she also added that non-tailed dogs use their hackles instead for communicating.

Moreover, research in 2007 found that tail-wagging positions could also indicate canine feelings. For instance, a tail wagged to the right shows a positive emotion. While a tail wagging to the left portrays negativity. Further, a vertical tail shows aggression, and a vigorous wagging could indicate excitement. A tail wagging also indicates that dogs want to interact with you.

To Keep Their Balance

Dogs have tails because it acts as their counterbalance equipment when they’re running. For starters, dogs are prone to swinging in the opposite direction. So, they move their tail in the same direction as their bodies to provide balance in their movements.

A dog’s tail may also aid in movement and stability. For instance, the tail is very useful in simple movements like jumping or leaping. Further, a tail was built to prevent dogs from falling over while doing their daily routines. On the contrary, dogs’ tails are not mostly used for actions like standing.

Tail Injuries To Look Out For

The bones in dog tails may be flexible, but that doesn’t mean they don’t break. Dogs, like any other creature, are prone to injuries. Thus, here is the list of the different tail injuries that we need to look out for as dog owners.

Dogs can hit their tails on chairs or tables while running around the house. Katie Grzyb, DVM, stated that the common result of a dog tail injury involves less wagging. Also, a broken tail may show signs of wounds, limping, and bruising. Yet, Dr. Grzyb added that to rule out a fracture as a sign of injury, an x-ray is needed to be conducted.

Moreover, according to Earth Rated, broken dog tail bones are hard to treat in homes. Fractures will heal once they are given proper treatment. So, to ensure that bones will grow back, visit a veterinarian.

Dog tails are covered with skin, so that means they can easily be cut by a sharp object. According to VCA Animal Hospital, dogs sometimes inflict self-harm by licking and biting. Well, they do that to flea-infested areas. As a result, that behavior can break the skin and cause cuts or, worse, infection.

So, as dog owners, it’s a must that we check our dogs for any tail injuries. Also, some cuts and scrape injuries can be treated with proper first aid. Yet, cuts like lacerations can be deep enough to require medical attention from a veterinarian.

Dogs can sometimes overuse their tails. As a result, they suffer a condition called Limber, which they can get from over exhaustion. Also, this injury can be caused by cold weather, swimming, or sometimes cage confinement. Further, hunting breeds like retrievers, hounds, and beagles are prone to suffer limber.

Meanwhile, dogs can also suffer from “Happy Tail Syndrome,” which leads to skin breaking and tail injury. According to West Park Animal Hospital, dogs wag their tails very hard, thus hitting nearby objects. Yet, as serious as it may look, this can be treated by veterinarians.

Dogs’ tails are also made of networks of nerves. So, when they’re overused, nerves can be pulled and thus results in limping. Moreover, that injury is called avulsion trauma. Also, an injury to the tail bone is a defect of the spinal cord as well. Hence, nerve damage in the dog’s tail can lead to incontinence.

Nerve damage is a serious case. This kind of injury requires a more hands-on approach. Also, the main treatment for nerve damage is surgery. So, as owners, if you notice your dog limping and peeing anywhere, better bring it to the nearest vet.

Tail movements can state emotions. But, sometimes tail positions show injury. A dog’s tail is made of tiny bones called vertebrae. Well, no matter how flexible they look, they can still bend and break. So, the first thing to do when dogs injure their tail is to seek medical attention.