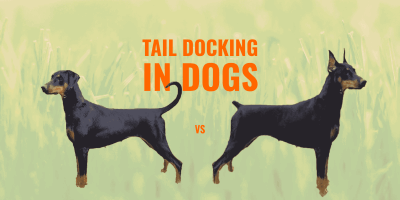 Cosmetic dog tail docking, much like ear cropping, is an elective surgery for dogs that certain breeds have to undergo soon after their birth. The practice of tail docking has been most common with breeds such as Dobermans, German Shorthaired Pointers and Schnauzers.

The surgery, also referred to as tail bobbing, involves removing the tail of the dog with surgical scissors by a veterinarian, usually without anesthesia. It is done at an early stage because that is when the tail of the puppy is still soft and, therefore, would cause less pain.

However, medical tail docking (an amputation) is different from bobbing. The most common reason behind the complete or partial amputation of a dog’s tail is a traumatic injury that makes repairing the tail impossible or inadvisable. Such tail amputation can also occur in the event of tail deformities that impact a dog’s gait or basic functioning negatively or enhance the risk of an injury.

Today, tail docking of dogs is more of a restricted practice except for medical tail docking which must be an absolute necessity.

Let’s look into the historical purposes of this practice, its legal aspects and its acceptance worldwide along with a few common concerns about tail docking for dogs, in this article.

Tail docking for dogs dates back to ancient times in history, through which the practice evolved with different purposes. Bobbing began with the Romans who believed that the amputation of the tail tip could prevent the animal from contracting rabies.

Another historical purpose of tail bobbing was to prevent a poor owner of the dog from participating in a hunting game. This was because the absence of the tail would put the dog at a disadvantage in a chase, although another argument puts forward that docked dogs are speedier even if less balanced and less agile.

For some breeds, tail docking continued simply to prevent dogs from getting tail injuries during activities like dog or cage fighting. At times, it was done because dogs were prone to injuries due to an overly long tail. Also, certain breeders and dog owners considered tail docking a possible way of preventing a potential hazard for working dogs.

Some of these hazards included the risk of thwarting the attack of a guard dog by seizing his tail. Similarly, hunting dogs like pointers could damage their tail tip in the underbrush and the long-haired dogs could become more soiled with a hanging tail.

Over time, dogs are no longer required to perform tasks for which they would require a shorter tail. That is why; in the present day, cosmetic tail docking is a restricted practice because it is mostly carried out to improve the appearance of a dog. Especially, to let them conform to their breed standards in terms of appeal.

Following is a list of all the dog breeds and types that tend to undergo tail docking in most parts of the world. The UK-based Kennel club registers these breeds and in spite of the prevailing awareness campaigns and enforcement of laws against such practices, they continue to be tailless in large numbers.

These are the breeds belonging to the terrier-group that have generally got their tail docked:

These are the gun dog breeds that have generally got their tail docked:

These are the breeds belonging to the “Working” group that have generally got their tail docked:

These are the breeds belonging to the “Pastoral” group that have generally got their tail docked:

These are the breeds belonging to the “Utility” dog group that have generally got their tail docked:

These are the breeds belonging to the “Toy” dog group that have generally got their tail docked:

Over the years, people have considered dog tail docking along with the sister practice of ear cropping to be painful, cruel and unnecessary. Several organizations speak up against and protest this practice. Because of this, many countries have started exercising a ban on these practices.

However, tail bobbing continues to be unrestricted in many others. Some of these allow only medical tail docking while banning cosmetic tail docking completely.

Despite protests from certain quarters, the practice of dog tail docking is widely prevalent in the United States. However, a few states like New York and Vermont managed to put some restrictions on the practice and have also passed bills to make it illegal. Animal rights organizations are frequently fighting the practice.

The United Kingdom has long banned tail docking and ear cropping of dogs. The Animal Welfare Act of 2006 restricts England and Wales from carrying out this practice with an exception for the Terriers and Hunt, Spaniels, Point and Retrieve breeds that categorizes as working breeds and are vet certified to be so.

The laws of the country allow medical tail docking for puppies of these breeds but the surgery must be done within the first five days of the dog’s life. Alongside, the owner must prove that the puppy has been bred to work by means of documents and vet certification. Following the surgery, the vet surgeon must also sign certificates to imply that the puppy was docked as well as microchipped as the law necessitates.

In 2007, docking was completely banned in Scotland, unless it is carried out for medical purposes, such as a treatment or a preventive measure.

Rest of the World

The rest of the world is somewhat divided in its approach towards the entire tail docking process and purpose. While some countries like Switzerland, Sweden, and Norway ban it completely, most South East Asian countries pose no restrictions on the practice.

Generally, countries follow the general idea allowing medical docking of a dog’s tail while restricting it as purely cosmetic surgery.

Dog tail docking is an intricate but quick procedure. The length of a docked tail varies depending on the breed of the dog. The idea is to cut the tail short enough to make it close to the body. The veterinarian aims at shortening the tail without indention to the maximum possible extent.

However, for some other breeds like the Wire Fox Terrier, the tail is docked about three-quarters of the original size. Docking is also often carried out as a means of correcting a puppy from a tailless breed born with a tail.

The surgery is typically performed on newborn puppies that are between 3 and 10 days old. Since it is usually done without anesthesia, there is a certain amount of pain and trauma that accompanies the procedure.

A tail docking surgical procedure lasts around 30mn and requires the veterinarian to:

It is imperative that the process is executed under sterile conditions by an expert veterinarian, who is comfortable in handling all types of breeds. They must be aware of the breed standard to know what the end result should be.

Taking care of the dog at home after the surgery is crucial. Make sure that the bedding of the dog is kept clean. A docked tail requires a clean, dry and urine-free environment to heal up faster.

Generally, you are allowed to remove the bandages after about 2-3 days or as the veterinarian recommends. The vet uses only small and safe scissors to cut the bandages and put the tape away from the dog’s tail tip.

The area of incision requires monitoring for redness, swelling or discharge, which indicates an infection. Avoid over-grooming the area and also keep a check on the adult dog licking the area perhaps. Lastly, schedule a visit to the veterinarian after 7 days or so to make sure that your dog has completely recovered from the surgery.

Following are some of the common questions about dog tail docking, answered in brief. Feel free to leave any other question in the comments section!

At what age puppies get their tails docked?

Tail docking for puppies is done when they are just between 3 to 10 days old. The surgery can be done without anesthesia until the puppy is about a week old only.

During this time, the tail continues to be extremely soft and tender and, therefore, involves not much of pain or risk. The tail is simply cut short to an appropriate length, based on the specific breed.

When tail bobbing is performed on an adult dog, the procedure becomes more complicated, requiring amputation under general anesthesia. So, the earlier it is done, the easier it is for the dog.

How much does dog tail docking cost?

The average price of docking is anywhere between $15 and $75 per puppy. However, the dog tail docker price can vary widely depending on factors like the method used, the availability of the veterinarian, the location and so on.

Is tail docking done under anesthesia?

Tail docking for puppies is done without anesthesia. The procedure gets executed quickly, within half an hour. Anesthesia is not a preferred option for a dog that is just a week old or less.

Whether it is for medical or cosmetic purposes, tail docking for adult dogs requires general anesthesia. Otherwise, the surgery can turn out to be really painful and traumatic for the dog.

Are dogs in pain during a tail docking procedure?

Tail docking can be painful and a bit traumatic too. The intensity or duration of the pain felt by the puppy under the ideal of typical circumstances can vary.

However, the surgical procedure carried out in the neonatal stage is painful because the nervous system is very vulnerable during this time. It can even bring some negative long-term changes. This, in turn, affects how pain is usually perceived and processed later in life by the dog.

For instance, if the puppy is too scared throughout the surgery, they can grow to be more anxious and apprehensive in general.

What is a non-cosmetic tail docking?

The common reason for medical tail docking, involving complete or partial amputation is a traumatic injury. Repairing of the entire tail of your injured dog might neither be possible nor advisable. In other instances, your dog might be born with some tail deformities, which, in the long run, will negatively impact his function or make him prone to injuries. If such injuries are found to happen earlier because of this deformed tail, medical tail docking can be proved to be necessary for the dog.

With legal restrictions imposed on the practice, even the precautionary removal of the tail of a young puppy can be performed only after it is proved that the animal is at a high risk of tail trauma, resulting from a congenital defect. The evidence can be furnished in the form of empirical data or expert opinions based on relevant experience.