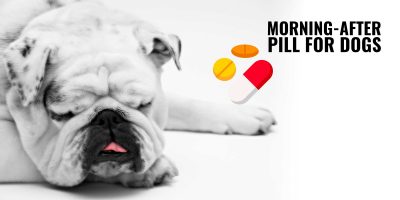 Accidents can happen and dogs mate sometimes independently from your wishes or intents. However, if you do want your pet to be able to reproduce in the future, then ovariohysterectomy (commonly known as spaying) is not the way to go. While this procedure is not all that invasive and comports little health risks (except when performed very close to the pregnancy term), it is radical.

Contrary to popular belief, unplanned pregnancies can be terminated successfully, allowing the pet to reproduce in the future. However, you need to see a highly professional vet to solve the problem.

Today we will take a look at some pregnancy termination solutions, insisting on the morning-after pill for dogs, its features, and its risks.

When to Worry About an Unwanted Pregnancy?

As a dog owner, just as you can probably differentiate an American Bulldog from a Pitbull, you should also know a few details related to dogs’ mating issues. For instance, if you lost the pet from your sight for only five minutes, it is not likely that it really got impregnated. The full mating process lasts at least 30 minutes and a successful one can last even longer.

If you are worried about an unwanted pregnancy, you should go see a vet immediately. The sooner you act the better chances you have to take control of the situation and balance your options.

If your dog has gone missing for a significant amount of time, you need the vet to perform vaginal cytology – a test confirming or infirming a pregnancy. You need to take the dog for the vaginal smear hours after the mating took place or a day later tops. If you take her a week after and she was indeed bred, the treatment and the procedures will significantly be different.

You can think about pregnancy termination with medication only after the vet confirms that she was bred. As it is recommended in humans, never give your dog any type of pills without the supervision of a professional.

According to specialists in the mismating field, a vaginal smear is considered positive if the vet finds sperm traces. However, not finding any sperm doesn’t mean the mating hasn’t occurred – it only means that it is less likely to have occurred.

Is There Such a Thing as a Morning-After Pill for Dogs?

The correct answer to this question is, paradoxically, “yes” and “no”. Moreover, the more detailed answer is that it all depends on your veterinarian, the state you live in and the availability of the drugs in your country. Just like the morning-after pill for humans differs from one country to another. Some morning-after pills are known as “abortion pills” are to be found in very few states and countries around the world.

When it comes to the morning-after pill for dogs, the most common solution is the treatment with either diethylstilbestrol (DES) or estradiol cypionate (ECP). They both rely on estrogen therapy as estrogens usually prevent fertilized eggs from migrating and implanting in the uterus. They are what we call the morning-after pill for dogs – but each of them comes with its own set of instructions, health risks and precautions.

What Does Science Say?

According to research, there are few controlled clinical studies to prove beyond doubt that estrogen therapy is safe or efficient to terminate a pregnancy in dogs. On the contrary, follow up surveys acknowledged that dogs receiving estrogen-based medication heightened some health risks in the dog populations.

Science agrees that while estrogen therapy may work, the inconclusive results may be generated by the fact that not all treated bitches were, in fact, bred. This puts a lot of pressure on the vet’s diagnosis skills, as unnecessary estrogen treatments will impact the overall health of your pet.

However, in order to have all the facts, we have to take a closer look at the two possible morning pills for dogs.

The same drug doesn’t work in the same way in two different dogs – just like it happens with us. In order to make sure that the morning-after pill is successful in terminating the pregnancy your vet should check the dog regularly for a few weeks. He needs to confirm that the pregnancy is terminated or not and find alternative solutions to solve the problem in case the treatment proves unsuccessful.

Morning-After Pill: Side Effects and Complications

Hormone therapy should usually be taken with precautions. Indeed, estrogens have their own share of side effects and can lead to serious long-term health issues.

In short, you need to be aware of:

As an alternative, you can talk with the vet about prostaglandin treatment to terminate pregnancy in your dog. Studies have researched the efficiency of a prostaglandin F2α and bromocriptine combo therapy in order to narrow the pet overpopulation, but there are yet more things to discover. In truth, no treatment is 100% foolproof – except for maybe one: surgical sterilization.

As a responsible parent, you need to take into account all data before making any type of decision regarding your pets. They need their health and you need to be aware that a pregnancy (wanted or planned, terminated or carried to term) leads to a myriad of issues (ranging from individual to social and even cultural) that you need to tackle one at a time.

Amanda Wilks is a Boston University graduate and a part-time writer, with a great interest in everything related to pets and proper health care for dogs.