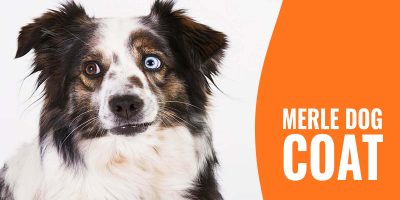 A merle coat in dogs is one of the most interesting and beautiful variations to come from breeding. Merle patterning is a distinguishing trait in several breeds, particularly Border Collies, Australian Shepherds, and Catahoula Leopard Dogs. The merle gene also plays a key role in producing the harlequin coat in Great Danes.

Unfortunately, the intriguing dog merle coat is associated with several health problems. Responsible breeding is important to reduce the risk of these problems.

What Does the Merle Coat Pattern Look Like in Dogs?

The merle gene dilutes random patches of a dog’s coat to a lighter color. These patches are distributed all over the body. They vary in size, shape, and color. Merle affects the eyes, resulting in dark-eyed, odd-eyed, or blue-eyed dogs. The paw pads and nose are sometimes mottled pink and black because the gene targets the skin as well.

The merle pattern is labeled “red” or “blue.” The merle forms of brown (or liver) are called “red” although red and brown are genetically different. Merle forms of black are called “blue.” Blue merle dogs can be distinguished by the marbling of gray, silver and black in their coat with some copper points possible on the face. Red merle dogs are marbled, light cinnamon to dark liver color with copper points on the face and legs. Tricolor dogs may look similar but typically lack the characteristic marbling of merle.

Some cases of the merle coat in dogs are masked by other genes. Recessive red dogs are affected by merle but patches are subtle or not visible at all. In addition, brindle and sable merles exist but are typically rejected by breed standards. Sable merles can be difficult to recognize and accidental double merle breedings can occur as a result. In addition, hidden or cryptic merles can occur. Cryptic merle dogs are genetically merle but do not visually appear to be merle.

Genetics of the Merle Coat

Merle is a heterozygote of an incompletely dominant gene, this is a type of genetic formula. Heterozygote refers to the inheritance of two different alleles from both parents. In this case, it refers to the presence of a dominant “M” allele and a negative “m” allele. This is why merle is written as “M/m.” Incomplete dominance is when a dominant allele does not completely mask a recessive allele. This results in a blending of both alleles. It is not the same as co-dominance. Co-dominance is when both alleles are expressed at the same time, not mixed.

When two merle patterns (“M/m”) are bred to each other, 25% of the puppies will be homozygous for merle. Homozygous refers to the inheritance of the same allele from both parents. These homozygous puppies are known as “double merles”, also written as “M/M.”

Some dogs do not look to have a merle pattern but genetically are merle. These merle dogs are called cryptic, phantom, or hidden merles. Merle pattern can be masked by other genes or heavy patching. Each gene has it’s own labeling including the recessive red (“ee”) and clear sable (ay).

Hidden merles appear to be solid-colored or have very faint merle patches that go unnoticed. The recessive red allele (“ee”) hides some merling. This is because recessive red dogs do not produce eumelanin pigment, leaving them a solid red color caused by phaeomelanin. Phaeomelanin is not affected by merle. This means that a recessive red dog with the merle allele appears to have no merle. The only indication of the merle allele in these cases is through blue or partially blue eyes. Recessive red and merle can be a tricky combination to work with when breeding dogs. The risk of breeding double merles by accident is always present.

Clear sable (ay) is another gene that hides merle patterns. Sable is the top dominant gene of the agouti (a locus) series. This means that one sable allele is enough for the gene to be expressed. Clear sables lack dark hairs (eumelanin) in their coats and look very similar to the recessive red (ee). In tests, the cryptic allele is written as “Mc.” This means that a cryptic merle dog still carries a dominant “M” and can technically produce double merles if bred to a merle.

Several dog breeds have merle pattern coats. Such breeds accepted by the American Kennel Club include:

Merle pattern has been introduced to other breeds through crossbreeding. These breeds are not currently accepted by the American Kennel Club:

It is suggested that Catahoula Leopard Dogs present a slightly different merle mutation compared to other breeds. This breed has a lower incidence of ocular abnormalities and deafness associated with the merle gene. This includes double merles. Phantom, cryptic or hidden merles may also be caused by a different mutation labeled as “Mc“. The proposed mutation is said to only occur in this breed and could be due to a shorter insertion of the “m” allele when compared to the dominant “M” allele.

Great Danes can exhibit a variant of the merle gene called harlequin. Harlequin is a dominant gene that occurs on its own locus, the H locus. It is inherited separately from merle. When paired with merle it acts as a modifier. Harlequin cannot work on its own. Every Great Dane carrying the harlequin gene and the merle gene has a harlequin coat. Beaucerons with a merle coat are also called harlequins. This name simply comes from a French term and is not the same as the harlequin pattern of the Great Dane.

Merle coat in dogs has been introduced into a range of other breeds. The practice is controversial. This is because it requires crossbreeding and potentially brings health issues to the target breed. French Bulldogs, English Bulldogs, and Pugs now come in a merle pattern but these dogs are not purebred. Chihuahuas also come in merle but are rejected by the UK Kennel Club.

Reputable breeders who wish to produce merle puppies mate a merle (“M/m”) with a non-merle dog (“m/m”). Around half of the resulting puppies are merle because these dogs will produce both “M/m” and “m/m” puppies. The remaining puppies are non-merle. It also eliminates the risk of double merles (“M/M”) because only one dominant “M” allele is involved in the breeding.

Double merle dogs are at a greater risk of health problems than single merles. Not every double merle dog will face these issues, but a significant amount of them do, which makes the deliberate breeding of these dogs unethical.

Congenital sensorineural deafness is directly associated with the merle gene. This means that a double merle affected dog is more likely to suffer from congenital deafness. Deafness results from the degeneration of the cochlear blood supply. Presumably, this is because of the suppression of melanocytes by the merle gene itself. Once degeneration has occurred, the losses are permanent and the cochlear neuronal tissue does not regenerate and sound cannot be transducted by the sensory hair cells.

Ocular defects are directly associated with the double merle coat. Microphthalmia is a defect wherein the eyes are smaller than normal. This causes restricted vision or even blindness including:

Persistent pupillary membranes are also present. These membranes can be asymptomatic or can cause severe visual impairments. Cataracts is also associated with the merle gene. If focal, they only cause minor impairments, but complete cataracts are possible too which can cause blindness. A double merle coat in dogs is also associated with a lack of tapetum lucidum. This is the reflective layer at the back of the eye. These dogs may have poorer night vision.

Double merle dogs can be more sensitive to light. This is because they lack pigment in their coat and skin which would normally shield the skin from UV light. Sunburn and skin cancer are more prevalent in exposed areas of the skin. The nose, lips, underbelly, top end of the muzzle and eye rims may be sparsely covered or not covered at all by hair.

If your double merle dog is sunburned, their skin appears pinker than normal. It will be more sensitive to touch. Like people, a dog exposed to excessive sunlight will develop skin cancers, always use sunscreen to aid dogs with sensitive merle skin. Hemangiosarcoma and squamous cell carcinoma are just two possible results. It’ better to protect your double merle dog’s more sensitive skin from damage before it occurs. If your dog stays outside during the day, always provide shelter. In hotter weather, you should apply sunscreen too. Child-safe SPF 30 to 50 sunscreen is suitable for use on your dog’s most sensitive skin: the nose, belly and other bare patches will need it the most.

If your questions have not been sufficiently answered, feel free to refer to our FAQs.

Merle coat in dogs does not always mean that the dog is unhealthy. Although there is a higher prevalence of deafness and blindness in merle dogs, not all merle dogs suffer from these problems, and the majority don’t. A study found that the relative risk of deafness is less than that in the white Bull Terrier and Dalmatian. The major issues stem from double merle breedings.

Double merle dogs are far more likely to be unhealthy. The double merle pattern is directly associated with ocular defects, auditory defects, and skin exposure that can lead to an increased risk of sunburn. That being said, some double merle dogs do not suffer these problems. Some even live fulfilling lives. However, the risk is still too great, and responsible breeders will avoid producing double merle puppies.

Why Can You Not Breed Merle to Merle?

Is the Merle Gene Dominant?

The merle coat in dogs is incompletely dominant. The merle allele “M” is dominant and the non-merle allele “m” is recessive. For a dog to have a merle coat, it requires both alleles. This makes merle heterozygous. When two dominant “M” alleles are present the result is a double merle dog. This is achieved by breeding one merle (“M/m”) to another merle (“M/m”). The practice is regarded as unethical. Double merle dogs are more likely to live with blindness and deafness.

What is the Difference Between Harlequin and Merle?

Harlequin (“Hh”) and merle (“Mm”) are inherited separately but must work together. The harlequin allele modifies merle and cannot be expressed on its own. Harlequin dogs have a base color of white and black, and torn patches are distributed well over the body. Smaller gray patches consistent with a merle marking are also present. There are three different variations:

Other genes affect the expression of harlequin. When the dilution gene is inherited (ddHhMm) the harlequin patches become blue. The brindle gene can also be expressed at the same time as harlequin, but it must be paired with sable if it shows all over the body (ayaykbrkbrHhMm). Brindle is broken up and patchy due to the effects of the merle gene.

Merle pattern in dogs is desirable in some specific breeds but must be produced responsibly. The merle gene is associated with several health problems and isn’t always visibly obvious to breeders. Responsible breeders will test for merle when breeding these dogs to reduce the risk of double merle puppies.