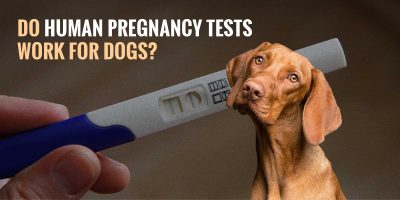 Human pregnancy tests do not work for dogs due to their hormonal pregnancy marker being found only in humans. While humans are able to detect pregnancy through at home testing using urine as a pregnancy marker, dogs, on the other hand, can only be tested through more substantial means such as ultrasounds and x-rays.

It is quite normal for breeders and dog owners to get excited by the new prospect of pregnancy in their pet. Yet, many tend to seek out ways to detect if a dog is pregnant to offer a quicker response.

Dogs are not built the same way humans are due to different hormones. Currently, there aren’t any over the counter tests in which dogs can use to determine pregnancy by a urine sample. Therefore, this is one of those cases in which patience goes a long way to determine accurate readings.

When humans are pregnant, they produce a specific hormone called Human Chorionic Gonadotropin, or HCG. Note the keyword, “human”. At-home pregnancy sticks test the urine in humans specifically for this hormone. This is how humans are able to obtain quick and accurate results.

Since dogs do not produce this hormone, they cannot be tested for pregnancy through the means of urine testing. In fact, dogs, in general, do not produce a specific “pregnancy” hormone the way humans do. Dogs do, however, produce more progesterone and this is the cause of much confusion among many dog owners.

Are There Pregnancy Tests for Dogs?

Yes, there are ways dogs can be tested accurately for pregnancy. Female dogs may not have the advantage of a rapid response rate for pregnancy detection as humans do, but that does not mean they are exempt from testing.

In fact, according to the American Kennel Club, a veterinarian can detect pregnancy in your bitch around 28 days in gestation. This is done through very secure and trusted measures via an abdominal palpation or an ultrasound. In addition, dogs may also receive a blood test to determine pregnancy. None of these methods of testing should be done at home, but always in a professional setting by a trusted professional.

However, unlike humans in which a simple urine sample is needed and the results are almost instantaneous, these relaxin tests require blood. Nor are these exams necessarily as easy than the average at home test sticks humans acquire. The test to measure pregnancy in female dogs requires you to draw blood and then separate the blood from the serum/plasma.

Testing kits for detecting dog pregnancy can be found online and ordered for home delivery. But no dog breeder or dog owner possesses the equipment at home to actually perform these tests properly and receive accurate testing results since blood samples are required. This is precisely why it is advisable and highly recommended you take your pet to a veterinarian and get her checked out professionally. Get your dog’s pregnancy confirmed by taking reliable testing methods such as an ultrasound abdominal scan or an x-ray.

Another form of testing is done through palpations. This is when a person feels for the babies on the dam’s abdomen. This can be done only between the days of 28 and 35 and should not be done at home as to avoid injury. From day 45, a female dog can undergo an x-ray to detect pregnancy. These are extremely reliable tests and also provide more information than ultrasounds. During an x-ray, a vet is able to determine how many puppies are in the litter.

In addition to the advantage of knowing how many puppies are inside the dam’s womb, an x-ray exam can also help in checking the bone structure of the puppies. Additionally, during the end of her pregnancy, roughly between a week or two before she is due, it is highly likely your vet may want to test your bitch again. This is often a great idea as it will help confirm the results from the previous test as well as give you crucial recommendations on what to expect during the whelping phase.

Be Aware of False Pregnancies

It’s important to check for accuracy because many dogs may experience what is known as a pseudopregnancy, or false pregnancy, in which she exhibits much of the same symptoms of pregnancy but is not actually pregnant. The best exam to take for testing is the ultrasound. It is completely safe and utilizes sound waves that create images of the inside of the dog’s womb. However, these means will not be able to tell you how many puppies are inside the womb.

Is Progesterone an Indicator of Pregnancy in Dogs?

Often times, people may erroneously assume that a bitch is pregnant due to higher levels of hormones in her system, namely, progesterone. However, the truth is, female dogs naturally produce higher levels of progesterone for two months after the stages of the heat cycle. And this is regardless of whether the bitch was bred or not. Therefore, the levels of progesterone in a female dog is not an indicator of pregnancy, nor should it be a factor in determining changes in the female’s hormonal system.

Ideally, breeders and dog owners must look for the common signs of pregnancy first which usually don’t appear until the bitch is at least three weeks pregnant. At this point, look for the “regular” symptoms of a pregnancy such as:

Also, another way many vets check for pregnancy is by an abdominal check. However, to obtain true, accurate results without fault and be assured that your bitch may be pregnant, then it’s time to take your dog in for a real exam. Take your dog to your vet and get her tested.