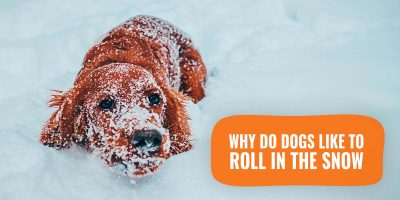 Much to the adoration of owners across the world, many snow-loving canines love nothing more than to romp, play and roll in their newfound winter wonderland. This begs the question of why do dogs like to roll in the snow? And which breeds love it the most?

When asking why a dog likes to roll in snow, it helps to consider their breed, their personality, and perhaps even their instincts. Here, we discuss why your beloved pup wants to roll and play in the snow.

Why Do Dogs Like to Roll in the Snow?

There are many reasons why a dog likes to roll in snow! These include pleasure, exploring their new environment, scent rolling, and relieving that persistent itch that they just can’t reach.

The simplest answer is that snow is fun! In mild climates, snow doesn’t come all the time, and your dog likely does not know when it will come back. This makes the fresh snow a novelty to your curious pooch. Not only can they manipulate and move the lighter snow around, but heavier snow provides ample opportunities for exercise. Plus, unlike dirt, dogs can easily submerge themselves into deep snow without the consequence of needing a bath later. All of these factors together make rolling in the snow a fun and exciting activity for your chilly canine! As long as your pup isn’t too cold, or showing signs of hypothermia, it’s best to let them have fun in the snow.

After a night of heavy snow, your dog’s environment looks new and exciting! Snow changes not only the sensory characteristics of your yard but alters the scents around your home too. This often renews a dog’s interest in their environment and makes for an enriching experience. If your dog has never seen snow before, they will be eager to find out what it feels like, smells like, and tastes like for the very first time. For these reasons, most dogs have a blast whilst exploring their newfound winter wonderland!

Cold environments, especially snowy ones, alter your dog’s ability to track a range of scents. When the air is very cold, scent molecules are only able to travel a shorter distance because they freeze. If your dog is unable to smell the scents that were previously in your yard, they make take it upon themselves to investigate further, or to roll in the snow to re-establish their scent in your home.

While it’s not entirely clear why dogs partake in scent rolling, some researchers suggest that there is an instinctive aspect of the behavior. Wolves roll in scents to bring information back to their pack. By rolling on a decaying carcass or fresh meat, a wolf can tell their family about what they found. In theory, this behavior makes it easier for wolves to find an abandoned kill.

Every dog has been there trying to scratch a seemingly impossible-to-reach itch. Once the snow arrives, your dog doesn’t have to look far for relief! Not only can the freezing temperature of snow provide instant relief from an itch, but the texture of hard snow and ice can do wonders for scratching that persistent itch too. Even before the snow comes, your dog will enjoy rolling on cool, icy concrete to scratch an itch. If you find that your dog frequently needs to scratch against the snow, consider asking your vet for advice. Dogs who scratch frequently may be suffering from external parasites such as fleas or lice.

Like us, many dogs seem to enjoy the cooler months of the year. The colder temperatures allow your energetic pooch to use up all of their energy without the risk of overheating. In addition, the cooler temperatures that winter brings changes your dog’s ability to track scents in the environment. This offers your adventurous pooch a whole new scent-scape to explore, refreshing their interest in their surroundings.

Not all dogs will enjoy the colder months, no matter how many gifts the season brings. Not only do some breeds struggle to cope with the cold, but some individuals simply don’t enjoy the chill of snow and ice interrupting their daily walks. The cooler temperatures also cause some owners to feel reluctant to walk their dogs, leading to less exercise for many cooped-up canines.

Which Dog Breeds Love the Snow?

Many breeds that love the snow have a natural appreciation of it. These breeds originate from cold and snowy regions where work goes on regardless of the plummeting temperatures. On the other end of the spectrum, some breeds struggle to cope with the cold and should not be exposed to snowy conditions for long periods of time.

Perhaps one of the most iconic snow-loving breeds, the hardy Siberian Husky originates from the chilly climate of Northeast Asia. These hard-working dogs were bred by the indigenous Chukchi people of the Chukchi Peninsula for sled-pulling, guardianship, and companionship. With a thick, cashmere-like undercoat coupled with a thick topcoat, the Siberian Husky is ready to play in any weather, even in temperatures from −58°F to −76°F.

Next in line is the St. Bernard! Originating from the Western Alps, the St. Bernard is another distinctive breed built for withstanding the cold. The gentle giants of the dog world, Newfoundlands have a water-resistant, double coat that protects them from the icy chill of cold water. There are many more breeds that are built for the cold, including the Alaskan Malamute, Bernese Mountain Dog, Norwegian Elkhound, and the Old English Sheepdog.

Several breeds struggle to find any enjoyment in the winter season. These breeds include those with short hair, small bodies, and shorter legs. Not only are these breeds not insulated from the cold, but shorter legs must work harder to navigate deep snow. Dachshunds, Chihuahuas, Basset Hounds, Greyhounds, French Bulldogs, and Yorkshire Terriers are just a few breeds that struggle in the cold. Be sure to keep these breeds wrapped up warm in the cold!

Still wondering why dogs like to roll in the snow? Feel free to refer to our Frequently Asked Questions section for more details. If in doubt about your dog’s snow rolling habits, always ask your vet for advice!

Can dogs smell in the snow?

While dogs can smell in the snow, the chilly temperatures make tracking scents much more difficult. Cold environments typically have fewer smells than warmer ones as scent particles freeze in the air. Because the scent particles freeze, your dog can only smell scents from a close range and may struggle to pick out a specific scent among the others. Overall, these cold conditions make the environment less “noisy” for your pooch
It might surprise you that warm, rainy conditions improve your dog’s ability to track scents, while snowy conditions make scent tracking much more difficult. This is because damp and heavy air conveys scent much easier than bitter cold air.

There are several reasons why your pooch might snack on snow. The most simple reason is fascination. For many dogs, snow is something new, novel and exciting, and naturally, your dog explores new things with their mouth and nose. Plus, just like humans, some pups have odd tastes. To some dogs, the freezing temperature and crunch of heavy snow make for a quick and tasty snack!

However, as with any behavior, there is always a scientific and perhaps concerning side to it. One of the most common reasons for eating snow is dehydration. Some dogs prefer to eat snow over drinking stale water that was last changed a few days back. Unfortunately for your dog, snow contains less water than rain. Your dog may also eat snow due to an underlying medical condition. A sudden love for eating snow points to several conditions, including Cushing’s disease, kidney failure, and endocrine diseases.

Why do dogs like to roll on their back and wiggle?

While rolling and wiggling behaviors are not fully understood yet, it’s currently suggested that the behavior has an instinctive element to it. Some researchers believe that rolling and wiggling harken back to the behavior of your dog’s wild ancestors, who would mask their scent to sneak up on prey. They may also roll on top of unusual scents for a show-and-tell with their family later on.

On the simpler side, there are plenty of reasons why your dog might wiggle and roll that don’t necessarily involve instinct. Your dog might roll to express happiness and contentment. If you’ve ever watched your pooch rolling around in their comfortable bed, you can also assume that it may just feel good to them. They may also roll around on an object to relieve an itch.

Why do dogs go crazy in the snow?

If your dog is new to snow, it’s not uncommon to see them spontaneously burst into an uncontrollable sprint as soon as they step outside. This dizzying burst of energy is lovingly dubbed the “zoomies“, or more scientifically, frenetic random activity periods, by adoring owners. With the arrival of snow, your dog needs a way to express their excitement, and running is often the best way to do so!

It’s also suggested that dogs will burst into these frenetic random activity periods when they want to play, but nobody is playing with them. It may also be a way for them to encourage other dogs, or owners, to play along with them. Similar behavior is seen in wolves when they attempt to initiate play, thus adding a possible instinctive element to this endearing behavior.

Your dog loves the snow just as much as you do. If your dog rolls in snow, they may do so for pleasure, exploration, instinctive reasons, or to relieve an itch. Some breeds enjoy the winter more than others. These breeds are typically double-coated, originally bred to work in cold climates, and tolerant of freezing temperatures.