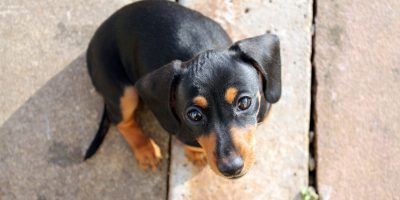 There is more than what meets the adorable eyes of our lovable pooches. Dogs have been known for their incredible sense of smell, but how about their sense of sight? Do you ever wonder how dogs see the world around them? Or how do dogs perceive time?

Do Dogs See in Slow Motion?

Motion is perceived differently across various animal species. Compared to humans, animals may have a slower or faster perception of movements depending on their varying Flicker Fusion Rates (FFR) or Critical Flicker Fusion (CFF).

FFR or CFF is the rate an observer stops perceiving an intermittent light and starts seeing a steady one at a specific speed. So, different animals process flickering light at varying speeds until it stops blinking in their vision.

Humans have 60 Hz FFR, indicating that once the light blinks 60 times per second, we stop seeing a flashing light and start perceiving a constant one. Birds have a higher FFR at 100 Hz, and a housefly even higher at 250 Hz. The FFR of dogs is at 80 Hz, about 25% higher than humans, while sea turtles have a lower FFR at 30 Hz.

So, why is FFR important? These rates affect both the perception of motion and time for each species. It is more like following your own pace, and once we compare each speed, we see each other as either slower or faster. High CFF means quick detection of rapid environmental changes and a split-second reaction. This agility helps in their hunting, survival, or day-to-day living.

So, do we move slower in our dog’s vision? Yes! Since we have lower FFR than dogs, our actions appear in slow motion to them.

After learning about the different rates at which animals perceive motion and time, let’s explore further how the researchers have uncovered these data.

The study conducted by scientists at Trinity College in Dublin investigated 34 vertebrates, including dogs, using a flashing light. To know how fast the brain could process speed, they examined how quickly they can perceive blinking lights per second.

By measuring the electrodes of the brain activity, the researchers determine the frequency of time perception. High-frequency rates meant finer resolution, making movements appear slowly, the same as the slow-mo setting on your phone’s camera.

It explains why we see turtles move slower as we have a higher frequency than them, yet we can never get ahead of the housefly’s quick response due to their much higher frequency.

Similarly, dogs catch treats or frisbees with precision mid-air because they perceive our movement as slower than theirs.

The same study also showed the relationship between the body mass and metabolism of the animal to its time perception. Using metabolic rates, body mass, and a controlled light level, the researchers compared the CFF of the 34 vertebrates. The subjects were from varying classes of birds, amphibians, reptiles, and mammals.

They tried to mimic the light levels of their natural habitat to get the most accurate influence of the environment on its CFF.

Not only does metabolism and body mass affect the visual ability of animals, but so does the environment in which they thrive and evolve.

Can Dogs See Images on TV in Real-Time?

You might have seen your dog stare at your TV upon seeing another dog on the screen. Some dogs even start jumping when they see a squirrel or birds on the television.

Depending on the kind of television, dogs may or may not perceive the images the same way as we do. Televisions using 60 images per second may be perfect for our FFR but are quite slow for the dogs. Remember, we’ve mentioned that dogs need to see 80 frames per second to perceive motion.

However, newer versions with high-definition features offer higher frames per second, making dogs enjoy the same show as you do.

Do Dogs See The World In Slow Motion: FAQ

Because dogs’ FFR is 25% higher than humans, they perceive our actions as slower. So, yes, we appear in slow motion to our dogs. It explains their agility during playtime. They react quickly to our movement, and with the toys, we throw up in the air for them to catch.

Can dogs take more visual information in a short period?

Alternately, dogs’ heightened sense of sight compared to humans makes them observe more visual details than us. Think of a high-definition video of events showing great clarity of details. It makes them more aware of the environment and its rapid changes.

How long is an hour for a dog?

Not only do dogs perceive motion faster than us, but they perceive time differently as well. Dogs may have no idea how we measure time in minutes or hours. So, how does dog time work? Dogs sense time based on their repetitive routines or familiar smells such as fading scents or changes in the air.

We always look forward to going home and being greeted by our happy dog. Our beloved fur babies may even feel more excitement than us. This natural reaction to separation proves that dogs sense time passing, and the longer the owners are away, the more excited they are for their return.

We often say one “dog year” is comparable to seven human years. However, this is not an accurate formula to calculate a day for them. Dogs may experience our units of time differently. 24 hours may feel longer for a dog than you because they process more visual information in that period.

As the cliche goes, “Time is the most valuable asset we have in this life” however, the perception of time varies across many species. It may appear faster or slower, but for sure, time spent with each other, especially with your dogs, is time well valued!