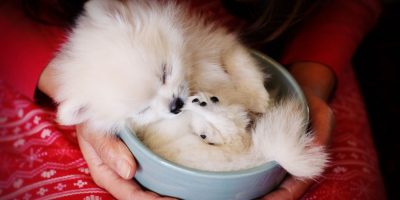 Teacup dogs are adorable, but such small dogs can come with big health risks. Due to their rise in popularity in recent years, it’s important that prospective owners understand how their basic needs differ from other dogs. So, are teacup dogs healthy?

Let’s find out everything you need to know about Teacup dogs including how they’re bred, how it can impact their health, and how to look after one.

What are Teacup Dogs

Teacup dogs are miniature versions of small dog breeds, such as Chihuahuas, Pugs, Poodles, and Shih Tzus. Whilst they are not currently a recognized breed, unofficially, they are supposed to measure around 17 inches at most and weigh no more than 5-6 lbs at adulthood.

They are typically sweet-natured, energetic, and playful dogs – although, due to their small size, they only need about 30 minutes of exercise a day.

How are Teacup Dogs Bred

Whilst the breeding of small dogs began thousands of years ago, tiny Teacup dogs are a fairly recent phenomenon. They have boomed in popularity in the last 20 years due to their status as the perfect “purse dogs”.

Teacup dogs were originally, and still can be, the result of two naturally tiny dogs breeding. However, their millennial fashionability has lead to many breeders resorting to breeding runts of litters, inbreeding, and/or malnourishment in order to breed them as small as possible. All of these things can cause a number of serious health issues for dogs, as well as unhappiness and a significantly shorter lifespan.

For this reason, a lot of dog lovers advocate against buying Teacup dogs as to not contribute to the fad and encourage bad breeding. However, if you’re desperate for a Teacup pup – there are good, responsible Teacup breeders out there. So be sure to research and buy from reputable and highly-rated breeders or adopt from a shelter.

That said, with good breeding and the right owners – these dogs can live for up to 15 years and live long and happy lives!

Inbreeding increases the risk of malformations and passing on genetic disorders. Malnourishment stunts skeletal growth and the development of internal organ systems.

Owners unsure of their puppies’ background should attend regular vet checkups to make sure they are developing properly, make sure they receive all of their vaccines, and get them checked for genetic disorders.

Runts of the litter are often used for breeding Teacup dogs because they are smaller than their siblings due to birth defects. Most commonly heart defects and liver shunts. The offspring of two runts are likely to inherit these problems too.

The most common congenital heart problem that affects Teacup dogs is chronic degenerative valve disease (CVD). This is a progressive degeneration of the valves in the heart, primarily the mitral valve. It leads to heart failure if left untreated.

Symptoms of chronic valve disease include:

While heart disease can’t be reversed, it can be managed and doesn’t have to shorten the affected dog’s life. Vets will diagnose CVD after listening to a dog’s heartbeat for murmurs. They may prescribe medications and lifestyle changes to prevent it from getting worse. With careful monitoring, the prognosis is generally good.

A liver shunt is when an abnormal connection forms between a portal vein between the gastrointestinal system, pancreas, and spleen to the liver. Diagnosis requires blood & urine tests but may require further testing.

Symptoms of liver shunts include:

Multiple liver shunts require long-term treatment with dietary changes and medications such as antibiotics and the administering of lactulose (sugar), although single shunts can be treated with surgery, and this gives dogs the best chance at recovery.

Most dogs improve almost immediately with treatment, and around a third of dogs will go on to live a long life, especially those that were older at the time of diagnosis. Unfortunately, over half of the dogs that receive treatment still pass away within ten months of diagnosis because of progressive liver or neurological damage.

Teacup dogs are significantly more likely to break their bones and even die from things like traffic accidents, attacks from other dogs, even things like falling off of furniture can be fatal for these dogs because of their tiny bones.

Tragically, it is also not unheard of for owners of Teacup dogs to accidentally injure and even kill their beloved pets by dropping or stepping on them at home. For this reason, Teacup dogs are not suitable for families with small children. People or families looking to own one of these dogs must Teacup-proof their homes and make them as safe as possible, by making sure yards are fenced off, sharp corners and heavy objects are out of reach, and preferably providing carpeted floors to minimize falls.

Symptoms of broken bones in dogs include:

Dogs with broken bones should see an emergency vet as soon as possible for surgical treatment.

Because of their tiny bodies, Teacup dogs’ blood sugar can drop to become hypoglycemic after missing as little as one meal. This affects a dog’s energy levels and overall mood but can be fatal if left untreated.

Symptoms of hypoglycemia include:

Owners should give dogs showing signs of low blood sugar water mixed with sugar to drink. In advanced stages, they should be taken to see a vet for examination & treatment as soon as possible.

Smaller dogs are also prone to digestive issues. To combat this, always feed dogs food that is high-quality, vet-recommended, natural, and high in fiber.

Avoid foods containing grains and artificial or filler ingredients, and add some probiotics to their diet if the dog is particularly affected.

Symptoms of digestive problems may include:

If you are feeding your dog well and they are still experiencing problems, contact your vet for advice as they could have an underlying condition or allergy.

Hydrocephalus or fluid on the brain is common in Teacup dogs and is caused by an excessive amount of cerebrospinal fluid leaking into the dog’s skull. This makes the brain swell, causing irreversible brain damage and sometimes death.

Symptoms of hydrocephalus include:

If a dog shows any of these signs, they should be taken to a vet immediately. Depending on how severe the case is, it may be treated with medication or surgery.

A common issue for short-snouted dogs in general, respiratory problems can range from Tracheal Collapse to Pneumonia.

Symptoms of respiratory problems in dogs include:

Dogs showing these symptoms should see their vet for examination as soon as possible. Vets may perform X-rays and other tests to get to the root of the problem, and the appropriate treatment will be prescribed.

This could be antibiotics, respiratory therapies, or ventilator treatments. Not all breathing issues can be cured, but they can all be managed. There are vaccines to avoid some respiratory problems that all dogs should receive.

What are Teacup dogs?

Teacup dogs are miniature versions of small dogs, commonly breeds such as Chihuahuas, Pugs, Poodles, and Shih Tzus. Unofficially, they measure no more than 17 inches and weigh no more than 5-6 lbs when fully grown. They are very energetic, playful, and sweet-natured dogs.

How long do Teacup dogs live?

If bred properly and treated with love and care, Teacup dogs can live for up to 15 years! However, unethically bred Teacup dogs may not live for very long as they are more likely to have health problems. It’s also worth noting that tiny dogs are more prone to accidents because of their tiny bones, so if you are looking to own one, be careful!

What health problems do Teacup dogs have?

How much does a Teacup dog cost?

Currently, in the US, the average Teacup puppy/dog sells for between $750 – $2,000, depending on the popularity of the particular breed or crossbreed.

Is it cruel to breed Teacup dogs?

It is cruel to breed any kind of dog unethically, and unfortunately, many Teacup dog breeders are unethical in their breeding tactics. If you want a Teacup dog, research reputable breeders to avoid those that maltreat, inbreed, or breed runts, as this can have horrific consequences on the dog’s overall health and wellbeing. Even if it costs more, it is worth it.

Some breeders mislead prospective owners and claim their litter to be Teacup puppies when they’re just the puppies of a regular small dog breed, and charge extortionate prices. Because Teacup dogs aren’t an official breed, there’s no way to regulate this – so always buy from trusted breeders!

Do Teacup dogs take a lot of looking after?

Teacup dogs are fairly high maintenance. Not only do they need feeding multiple times a day, but they also require a lot of care and caution because of their fragile bodies. Teacup dogs are significantly more likely to break their bones, even die, from something as little as falling off of a bed.

Are Teacup dogs well-suited to families with children?

Although they sound like a match made in heaven due to their small size and sweet nature, Teacup dogs aren’t well suited to families with young children because of their fragility. If they are accidentally dropped, stepped on, or having something dropped onto them, they run of the risk of serious injury, even death.

What do Teacup dogs eat?

Teacup dogs are prone to digestive issues and low blood sugar because of their tiny bodies. To combat this, look for foods that are high in fiber and contain Karo syrup. They should eat little and often, rather than just breakfast and dinner. The food also needs to be very small to prevent choking.

Although they can suffer poor health if they’re not bred or handled correctly, with proper breeding and the right owners, Teacup dogs can live long and happy lives. To avoid heartache and expensive vet bills, always buy from reputable breeders, and always research the dog you are buying – Teacup dogs need loving, gentle, devoted families.