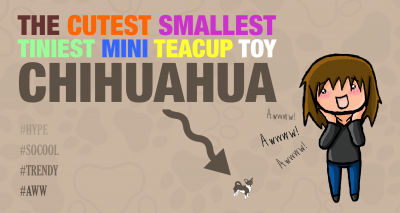 Dogs are products, dog breeding is a business. Nothing new here, and we pretty much all know about this situation, just a few breeders and observers still living in denial. However, breeding as a business is not and should not be a profit-obsessed trade where dogs are treated just like meaningless goods. Dogs now seem to belong to a specific model, their breed belongs to a brand, their breeder’s kennel name is the company. Wow.

Like with everything, being measured is the best way to go, especially in a new market like toy and teacup breeds of dogs. But from the sellers as much as from the buyers, there is no measure as even simple spectators are in awe for these unhealthy dogs, and their value is counted in thousands.

Enough is enough. Not once, not twice, not three times, I cannot even count how many times I have seen tiny (and I mean WAY TOO UNHEALTHY TINY) dogs and puppies showcased on social medias and websites.

Small dogs are cute in lots of people’s eyes, be it. Frankly speaking, small(ish) dogs ranging from Chihuahuas and Pomeranians to Beagles and Cavaliers, are pretty adorable and their puppy-like features will make the most hardcore human-beings melt.

With the Internet and more precisely, with social media, the race to the most popular “awww” picture has become the modern gold rush. The objective is to get millions of likes and shares and comments and retweets and reblogs and +1’s and regrams and well, you get the gist.

People like and share these pictures and videos, and whoever published the “awww” picture of the week gets a few days or weeks of fame and disappears into oblivion.

Click on the screenshots below to enlarge these recent (2015!!) examples of excessive dog breeding.

But what about the dogs, you know, the living creature with a beating heart and an iron-clad loyalty to us, smart humans, what about these poor dogs taken advantage of?

This trend, or craze, creates an insane market for teacup dogs, designer breeds, microscopic pups, and so on. And in case it needs to be reiterated: teacup dogs are miniaturized versions of already small breeds, generally weighing less than four pounds at full maturity.

To the average person, it might ring no bell at all and trigger yet another “awww”, but with a tiny bit of reading, you will understand that breeding dogs excessively simply to fix one physical appearance (such as small size) is suicidal, for both the progenies and the breed.

What Does Science Say About Toy Dog Breeding?

Every single breed of dog is prone to its own set of medical conditions and genetically inherited diseases. But teacup dogs, and any breed that is bred for a particular physique (pug, bulldog, shar-pei dogs for example), are victims of a flock more diseases and medical conditions.

No dog should be that small, so when they are of such a tiny size because it is forced upon them, they suffer. Organs and bones are not prepared for such size and weakness.

The digestive system is commonly taking the hit: low blood sugar level (hypoglycemia) is affecting most tiny dogs, so they must be fed very little very often.

Precautions can help make them feel better, but it won’t get rid of most digestive complications that will come with time, such as liver shunts.

Hydrocephalus or “Water In The Brain”

Hydrocephalus (or Water In The Brain) is a medical condition of the brain increasing the pressure in the skull and resulting in the swelling of the head. The swelling is caused by an excess of cerebrospinal fluid (CSF), and it may have several origins and causes.

There are two types of hydrocephalus that your dog could be attained by: the Obstructive Hydrocephalus or the Compensatory Hydrocephalus. Both can be present at birth or develop over time in your small breed dog. The exact causes are uncertain but acquired hydrocephalus may occur at any point during a dog’s life.

Small, miniature, and toy breeds are way more affected, and the same goes for brachycephalic dogs, these are dogs with those with shorter faces such as Bulldogs, Pugs, Pekingese, etc.

Inbreeding To The Extreme…

The reason is simple, to reach such an extreme physique, the breeder must keep on breeding dogs belonging to the same genetic pool so these traits and characteristics become “fixed”. We call this process of breeding close relatives inbreeding and linebreeding.

A clear example is for example two Chihuahuas having a litter, with one puppy smaller than the others. The breeder will keep and mate that smaller puppy with the smaller of his parents which will lead to a litter of smaller Chihuahuas. And they keep going on and on and on until they constantly get a teacup-sized litter, each and every time.

You can understand how bad this is, would you have babies with members of your family? Especially with all the troubles, you can expect from such a close mating.

Should Breeders Take The Blame?

Difficult to answer since whenever there is a demand, there will be a supply. Dog breeders are not the ones to blame, unethical profit-obsessed dog breeders are the ones who should be punished, not just blamed. There are very few dog breeders who work with teacup breeds and have good intentions, but here again, they do not even realize how they are severely ruining dozens and dozens of dog lives.

Most bad breeders argue that “who are we?” to decide what is the lower limit to the size of a dog? After all, Chihuahuas exist so why can’t a smaller version of a Chihuahua exist? Well, Chihuahuas and other small dog breeds took decades to reach that size so their whole internal organs and skeletons could adjust to their size. With the toy breeds we are currently seeing, it took less than a handful of years. I let these breeders do the maths if they can.

Because to make money, the bad guys must use the methods we described above, which then leads to small dogs who are physically unable to have large litters. The mother dog becomes profitable only if she has multiples litters of two or three puppies, as often as possible, and usually back to back. It is without surprise that bitches treated that way won’t stay alive for long.

The toy puppies go for thousands (of dollars and pounds). They are worth gold to those irresponsible breeders who are willing to go to even worse extremes. Some of them starve their pregnant bitch so her body forces the puppies’ skeleton to shrink in size. Can you imagine what such torture will produce? Superbly cute tiny dogs from the outside, but broken from the inside.

Clients Have a Huge Responsibility In This Modern Disaster

All owners of bite-sized dogs should feel bad because even the most amazing dog breeder who truly has good intentions will still produce unhealthy dog breeds solely for the look. And they know, as much as the consumer knows, that cuteness kills.

Before getting any dog, from any breed, the future owner must document himself and read what is the breed about. And the excesses required to get such small dogs are well-documented for whoever takes five minutes to Google it.

Dogs, when purebred, must comply with the Kennel Club’s official breed standard. The standard defines how dogs belonging to the breed must look, it is a worded ideal dog. But there is no official toy bread, which leaves the window opened for abuses and frauds. Chihuahua is a purebred, Teacup or Toy Chihuahua is not. So what you think is a small pure Chihuahua might not even be a Chihuahua. Because these tiny dogs cannot be officially registered, you won’t have paperwork with your puppy, so many breeders simply lie on the age of the dog to make it look like a bargain teacup dog.

It is just wrong in every single aspect.

Not much. No organization or institution is trying to tackle the issue so breeders keep on breeding and buyers keep on buying. Facebookers keep on liking and bloggers keep on posting.

Like every single trend, hype, and craze, it will eventually die down and the demand for such dogs will drastically decrease, and breeders will get rid of these dogs and take on the new trend, whatever this one will be.