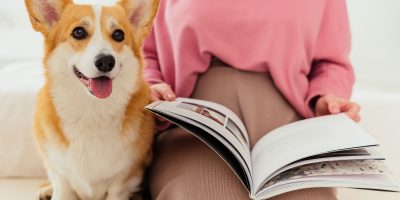 Dogs are loyal and affectionate animals. Dogs can sit anywhere that they like and that includes sitting next to you. Yet, you may be asking yourself why do dogs sit so close to you. Well, that could be their nature. Or, it could mean something else.

Why Do Dogs Sit So Close To Their Owner?

Canines can understand emotions as stated in a study about dog psychology in 2018. According to that research, dogs respond to their owners’ emotional features.

Also, dogs know how their owners feel so that means they can complement those feelings. For instance, a sort of comfort is shown when a dog sits next to you during a tiresome day.

Other than socializing, dogs may also want to protect you. Yet, sometimes it is a different story. According to Sandra Mitchell, DVM, dogs want to be close to you since they feel anxious and frightened.

Meanwhile, based on Dr. Mitchell, dogs sit with you because of their nature. Plus, they just love your affections and pets. But, the Dog Advisory Council explained that sudden clinginess could be a sign of illness. Well, sometimes that clinginess can be due to a cognitive decline called canine dementia.

12 Reasons Why Your Dog Is Sitting Close To You

If you are wondering why dogs sit with you, then you came to the right article. Take a look at the 12 reasons below.

Dogs like to form lasting bonds with their humans since it’s their instincts. According to Mary Burch, an animal behaviorist, dogs imprint on their humans. During that time, dogs recognize their owners as human role models. In that way, when a human sits, the dog happens to sit too.

According to Texas A&M University, dogs have an instinct to attack when provoked. That is the main reason why some dogs are trained to guard their owners’ homes against intruders.

Also, Michelle Szydlowski, a vet technician said that dogs’ guarding behavior means that you belong to their pack.

Dogs can be both caring and protective. According to the Keating Firm Law, dogs sit with you because they want to keep you safe.

Research from Arizona State University showed that dogs want to defend their humans. Moreover, they bark and whine nonstop when their human is in distress.

According to JoAnna Pendergrass, DVM, dogs’ clinginess is due to human training. She added that dogs learn with the way owners interact with them. For instance, they get used to owners always holding and petting them. As a result, dogs will always want to sit next to you.

Science suggested that dogs have deceptive behavior. Moreover, a study regarding canine behavior proved that claim. It was explained that dogs may lay at your feet because they want something.

Also, dogs may pretend to sit and then proceed to steal your food as you turn your back shortly.

It is normal for dogs to jump on you while feeding them. Yet, dogs sitting on you every time could mean an entirely different thing.

When dogs sit next to you on the couch, it doesn’t mean that they miss you. Sometimes, dogs just want to mark their territory.

Dogs spread their scent to objects they like to claim. Further, that scent will tell other animals not to go near their marked territories.

Like humans, dogs can understand the feeling of jealousy too. A study about dogs’ emotions supported that claim. Based on research, canines know when they are being treated fairly. As a result, dogs may sit next to their owners the whole day to remind them of their presence.

Dogs get excited when they see you. Moreover, a dog that sits with its back on you is one way of showing trust and love.

Separation anxiety is stressful for dogs. Research about canine anxiety stated that dogs taken from their litter before 60 days old are more likely to grow up anxious.

Yet, another study in 2018 stated that petting or sitting with your dog before leaving can ease their anxiety.

Mark Stickney, DVM said that a dog that constantly lies by your side may be showing signs of stress and lethargy.

Also, another study about dogs stated that they can sense certain diseases. Hence, the reason why dogs sit next to you might be because you are sick.

Cathy Gait, an animal health technician, stated that pets and praises reinforce positive behavior. For instance, petting dogs when they sit may encourage a repeat of that certain act.

The Humane Society explained that rewards are important. Moreover, giving treats during training enhances the repetition of a behavior. It can also be the reason why dogs always follow you.

What To Do If Your Dog Always Sits Next To You

Some dogs like sitting with their humans way too much. But, if you don’t know how to react when dogs always sit with you, read the tips below.

Dogs will most likely do anything to catch your attention. Elizabeth Gray, a veterinary nurse, stated that dogs will sit next to you because they want to play. As a pet owner, you may show attention by hugging, playing, giving treats, or even talking to your dog.

Katy Nelson, DVM, expressed that affection is crucial in forming bonds with pets. She added that dogs like cuddling and sitting with their owners. Thus, we must not push them away. Instead, we return that affection by giving constant belly rubs and hanging out together.

According to Stephanie Gibeault, MSc, owners should practice giving their dogs some alone time. She added that when your dog sits next to you, start giving them toys that catch their attention. Then, quietly walk away and return after 1 to 2 minutes to see their reaction.

Dogs with separation anxiety may bark and whine nonstop until they see their owner. According to Pet Check Urgent Care, dogs need to play with toys that divert their attention. Also, turning on the music or TV when leaving may help dogs cope with their anxiety.

Angela DeLucca from the Dog Training Station expressed that a leash is good to ensure your dog doesn’t jump around.

Meanwhile, the Humane Society stated that putting dogs in their crates is also good training. They added that boundaries are not cruel but rather it’s a responsible act.

According to Cathy Gait, some commands may lessen a dog’s clinginess. That includes coaching your dog when to climb on your lap at your will. For instance, saying the word “up” means to stand and get off. Whereas, speaking the word “lap” would tell your dog to sit on you.

Sometimes your dog sits next to you because it feels anxious. Yet, constant interaction can erase that fear.

Dint Virga, DVM, stated that dogs must have at least 3 to 4 hours of socializing. He added that walking or playing in doggy daycares is a good start.

According to Companion Animal Psychology, positive reinforcement is effective in training dogs. For instance, as owners, we give our dog a reward when he follows the command “sit” or “stay”. Moreover, the reward, in a form of treats, or praises will make the dog repeat that act.

Beverly Hills Vet stated that negative reinforcement uses fear instead of a reward. This can happen when owners force dogs to follow a command. In return, the dogs follow in fear of being punished. Moreover, this reinforcement should be avoided since it creates aggressive behavior in dogs.

Dogs like to sit next to their humans because they are social animals. But, there are times they get extra clingy. As owners, dogs’ sudden behavioral changes are not something to be taken for granted. Still, to be sure, you should bring your fur baby to the nearest veterinarian.