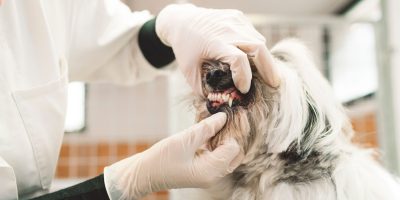 Assessing the color of a sick dog’s gums can be daunting, especially if you have concerns about what each color means. While some colors are normal, others suggest life-threatening conditions. And, as a doting pet parent, you want to know the signs of illness in your pup so that you can provide them with treatment as soon as possible.

Sick dog gum colors vary depending on the condition of your dog. A dog with an underlying health problem may have blue, bright red, pale, white, or yellow gums. In contrast, a healthy dog should have pink gums or dark gums as set by their breed’s standard. Ready to find out more about your dog’s gum color? Read on with us!

What Color Should My Dog’s Gums Be

Normal dog gums should be a bubblegum pink-like color. When you press on the gums with your index finger, they should lighten to a pale pink or white color, and then return to normal within two seconds once you remove your finger. However, not all dogs have pink gums! In some breeds, it’s normal to have distinct, dark spots on the tongue and gums. So, you might notice this in your Dalmatian, Mastiff, Australian Shepherd, or Irish Setter, just to name a few breeds. Some breeds are even known for having dark, black-blue pigmentation in their mouths, including Shar-Peis, Chow Chows, and Black Mouth Curs. The latter breed has brownish pink to dark grey gums. If you’re unsure about the color of your breed’s gums, check with other owners of the breed as well as your vet.

How Do I Check For Unhealthy Dog Gums

Checking your dog’s gums can be done by observing their capillary refill time. To do this, lift your dog’s upper lip and press your index finger to their gums. When you remove your finger, how long does it take for the gums to return to their original color? This time is the “capillary refill time”. If you have a breed with dark gums, don’t panic. If you’re able to hunt for a pink spot to check your dog’s capillary refill time, the test can still be done. Where no such pigment is available, bypass this test and check the color of your dog’s eye tissue instead. You can do this by gently pulling down the lower eyelid. Take note of the color without pressing on the eyelid.

In a healthy dog, it should take 1 to 2 seconds for the gums to refill. If this sounds like your dog, it means that their capillaries refill with blood at a normal rate. In contrast, a refill time of more than 2 seconds is associated with poor capillary refill and vasoconstriction, suggesting shock or a heart condition. Lastly, a capillary refill time of less than a second suggests a “hyperdynamic state.” This could be high blood pressure, fever, heatstroke, distributive shock, or early hypovolemic shock.

A dog’s gums can be many different colors, and each color suggests a different health status. As a general rule, if your dog’s gums don’t have their normal coloration, speak to your vet right away. Colors like blue, bright red, yellow, or white can suggest life-threatening health conditions in dogs.

If your dog’s gums are blue or purple, your vet may refer to your dog’s condition as “cyanosis.” It’s a sign that your dog doesn’t have enough oxygen in their blood. Your dog may also be panting or showing other signs of breathing distress. Low oxygen in the blood can suggest congenital heart disease, pneumonia, pulmonary thromboembolism, or ingestion of a chemical. So, cyanosis is a medical emergency and you will need to seek an emergency vet appointment right away.

Bright red gums suggest that your dog is overheating. Brick red gums are a classic sign of heatstroke as they show that your dog’s body temperature is rising above normal. As heatstroke progresses, the gums may then become purple, before becoming pale as shock sets in. Bright red gums may also suggest carbon monoxide poisoning in dogs. The lips and ears may also become red if your dog is suffering from carbon monoxide poisoning.

Red tinges on the gums often suggest gingivitis. In dogs, gingivitis is a reversible, mild form of periodontal disease. It causes irritation, swelling, and redness of the gums, especially around the base of the teeth. With gingivitis, your dog may also have bleeding gums and be reluctant to eat the right dog food they normally enjoy. Speak to your vet about a dental appointment for your pup if they have gingivitis to prevent peridontitis!

Jaundice is the cause of yellow gums in dogs. In dogs, jaundice is a symptom of a number of canine illnesses. These include hepatitis, diseases that destroy red blood cells, cirrhosis, inflammation of the pancreas, and massive damage to liver tissue. These illnesses lead to abnormally high levels of bilirubin in the blood, which causes the distinct yellow coloration seen in jaundiced dogs. If your dog has yellow gums, be sure to get them to your vet right away.

Pale or white gums in dogs can be caused by any number of conditions. Oftentimes, dogs with pale gums are suffering from shock, anemia, kidney disease, internal disease, heavy parasite infestations, bloat, heart disease, blood clotting disorders, and heavy metal toxicity. If your dog has pale gums, act quickly and call your vet right away. Pale gums in dogs always signal that something is wrong. Some of these conditions are life-threatening, making early treatment even more important.

Have any more questions or concerns about the color of a sick dog’s gums? Feel free to read through our Frequently Asked Questions section for more details. If in doubt about your dog’s health, always contact your vet for advice.

Is it normal for a dog to have black gums?

Some breeds naturally have dark or black gums! These include Shar Peis, Chow Chows, and Black Mouth Curs. Mixes of these breeds may also inherit the dark gums of their parents. Some breeds may also have dark spots on the gums and tongue. Check with other owners of the breed as well as your vet to confirm if this is normal for them.

What should I do if my dog has pale gums?

Pale or white gums in dogs can be a sign of a medical emergency. If your dog has paler gums than normal, always contact your vet as soon as possible. Pale gums can suggest life-threatening shock, heavy parasite infestations, blood loss, and heavy metal toxicity.

How do I check if my dog’s gums are dehydrated?

In dogs, dehydration causes the gums to become tacky, dry, and off-color. In contrast, a healthy, hydrated dog’s gums are pink and moist. Dry gums are not the only sign of dehydration in dogs, however, so be on the lookout for other classic signs. These include sunken eyes, loss of appetite, loss of skin elasticity, and lethargy.

The signs of dog gum disease include bad breath (halitosis), red, bleeding gums, and tartar build-up on the teeth. If your dog shows signs of gum disease, book them in with your vet as soon as possible for a dental cleaning. This is important for preventing periodontitis!

The color of a sick dog’s gums varies depending on the condition of your dog. While blue gums tell you that your dog isn’t getting enough oxygen, bright red gums suggest heatstroke or carbon monoxide poisoning. You know your pup best, so always check in with your vet if your dog’s gums look different.