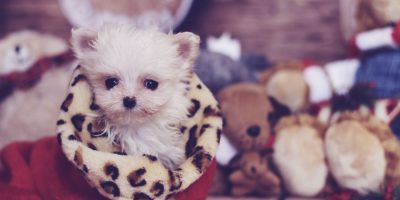 Let’s explore everything you need to know including the answers to the most frequently asked questions about micro vs teacup puppies.

Teacup puppies are extremely miniature versions of small and toy dog breeds. Whilst they are not currently a recognized breed, unofficially, they measure 17 inches at most and weigh no more than 5-6 lbs at maturity. Dogs that are typically bred to create Teacup pups include Chihuahuas, Pugs, Poodles, and Shih Tzus. They are typically sweet-natured, energetic, and playful – although they only need around 30 minutes of exercise a day. Teacup dogs were originally, and still can be, the result of two naturally very small dogs breeding. Whilst they may sound cute, the boom in popularity has lead to many breeders resorting to breeding runts of litters, inbreeding, and/or malnourishment in order to breed them as small as possible.

All of these things can cause serious health issues as well as unhappiness and a short lifespan. Runts are often smaller because of birth defects. This means that the puppies of two runts are also likely to be unhealthy. Inbreeding increases the risk of passing on genetic disorders and malformations occurring. Whilst malnourishment stunts skeletal growth and the development of organ systems within the body. Some breeders also mislead prospective owners. They claim their litter to be Teacup pups and charge extortionate prices when they’re just regular small breeds. There is no way to regulate it as Teacups aren’t an official breed.

For these reasons, many dog lovers advocate against buying Teacup pups as to not contribute to the fad and encourage bad breeding. That said, with proper breeding and the right owners – these dogs can live for up to 15 years and lead very happy, healthy lives! To avoid heartache and expensive vet bills, always research reputable breeders.

Micro puppies are even smaller than Teacup dogs, weighing around 2-3 lbs. They are the result of breeding two Teacup puppies together. This can be very hard on the mothers’ tiny bodies and there are often complications. So, again, we must reiterate the importance of buying from ethical breeders. Whilst all dogs are deserving of love, it’s worth noting that owning a Micro dog is a big commitment that requires a lot of caution. For example, because of their size, Micro dogs can become hypoglycemic after missing as little as one meal. This affects a dog’s energy and mood but eventually can cause seizures, unconsciousness, and even death.

They are also far less likely to survive things like attacks from other dogs, traffic accidents, even falling off of furniture can be deadly because of their tiny bones. Tragically, it is not that uncommon for owners of Micro pups to accidentally kill their beloved pets by dropping or stepping on them at home. For this reason, they’re not well suited to families with small children.

Those looking to own a Micro pup must Micro-proof their homes and make them as safe as possible. Owners must also be able to commit to providing regular meals throughout the day. Rather than just breakfast and dinner, these dogs should eat little and often, because of their proneness to low blood sugar and digestive issues. To further combat this, look for foods that are high in fiber and contain Karo syrup. Their food also needs to be very small to prevent choking and owners should attend regular vet check-ups.

What is smaller, a Micro or a Teacup dog?

Is it cruel to breed Teacup dogs?

The unethical breeding of Teacup dogs, or any dogs, is cruel. If you want a Teacup dog, research ethical breeders to avoid those that inbreed or breed runts, as this can have dire consequences on the pup’s health and wellbeing. Alternatively, adopt from a shelter or adopt a regular small breed.

How long do Teacup dogs live?

If bred properly and treated with love and care, these mini dogs can live for up to 15 years! However, unethically bred dogs may not live for a fraction of that as they are more likely to have health problems. It’s also worth noting that tiny dogs are more prone to accidents because of their tiny bones, so be careful!

What do Teacup dogs eat?

Teacup & Micro dogs are prone to digestive issues and low blood sugar because of their tiny bodies. Low blood sugar affects a dog’s energy and mood. Eventually, it can cause seizures, unconsciousness, even death.
To combat this, look for foods that are high in fiber and contain Karo syrup. These tiny dogs should also eat little and often, with small meals throughout the day, rather than just breakfast and dinner. The food also needs to be very small to prevent choking.

Teacup puppies are supposed to grow to weigh no more than 5-6 lbs. However, some breeders also mislead prospective owners. There’s no way to regulate it as they’re not an official breed, so breeders can claim their litter to be Teacup pups when they’re just regular small dogs and charge extortionate prices.

Whilst Teacup and Micro puppies are adorable, sickness and cruelty are not! If you are looking to buy a Teacup or Micro dog, please do so from a reputable, highly-rated breeder or adopt from a shelter. Always do your research about the type of dog you want and make sure you can meet their needs! These tiny dogs require a safe home, a gentle family, lots of love, and regular meals.