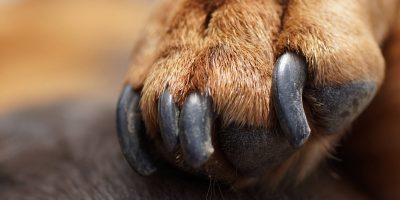 Toenail fungus treatment for dogs must be managed by a vet. Depending on the type of fungus, your dog may need one or more types of medication to combat the infection. If your dog shows signs of a fungal infection, be sure to check in with your vet right away!

Dog toenail fungus treatment can’t begin without first identifying the symptoms. Does your dog lick and chew at their paws? Are their nails, brittle, broken, or perhaps even soft? Is there discoloration or bleeding? If so, your pooch may have a fungal infection.

Licking or Chewing the Paw Area

If your dog licks and chews at their paws, be sure to check for signs of injury or infection right away. Licking may be a sign of pain and discomfort in the paw. As well as this, paw licking can also be a sign of anxiety. This is because excessive licking of the paw is thought to reduce stress levels because it prompts the release of endorphins. While paw licking due to anxiety may be entirely separate from nail disorders, your dog may also become anxious because of their pain and discomfort – so, this behavior can signal both problems, or just one.

In dogs, soft, crumbly nails are often the primary symptom of fungal nail diseases. You may notice that your pup’s nails are soft if you try to trim them. Also, brittle, split, and broken claws are all signs of a fungal infection. However, brittle nails can also be a sign of poor nutrition, systemic disease, or physical trauma.

Discoloration of the nail is a common sign of fungal nail infection in dogs. However, it can also be a sign of other nail disorders, such as symmetric lupoid onychodystrophy. If your dog’s nail is usually white, reddish coloration may develop if the nail bleeds. If the nail is usually black, it may become brown or a violet color in the presence of a fungal infection.

There are several types of fungus that infect dogs. These include Leishmania, Blastomyces dermatitis, Microsporum canis, Microsporum gypseum, and Trichophyton mentagrophytes. Only your vet can identify which of these fungi are causing your dog’s symptoms. 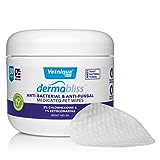 Leishmania is a genus of protozoa responsible for the disease leishmaniasis. At least 93 species of sandfly carry and spread this fungus. But, the most important species to infect wild and domestic dogs is Leishmania infantum. Transmission occurs when an infected female sandfly bites the dog. The incubation period can be anywhere from months to years, during which the parasite begins to disseminate through the dog’s body.

Canine leishmaniosis is zoonotic and endemic in 89 countries and is most prevalent in Europe, Africa, Asia, and the USA. To diagnose this disease, a vet will carry out a biochemical profile, a urinalysis, and a quantitative serology test. High antibody titers are present in 80% to 100% of infected dogs. To treat the disease, your vet may prescribe allopurinol, N-methylglucamine antimoniate, and miltefosine. However, treatment does not always provide a complete cure for the disease. Your dog may remain a carrier of the infection despite treatment and may relapse.

Blastomyces dermatitis is a fungus that lives in soil and wet, decaying wood. This makes it most common in areas close to waterways, such as lakes, rivers, and streams. This fungus is endemic to the USA, Africa, and the Arabian Peninsula. When disturbed, the fungus releases spores that are inhaled by the unsuspecting animal. This allows the fungus to infect the respiratory tract, where it reproduces. Once it infects an animal, the fungus converts into its “growth form” and becomes a budding yeast. From here, the yeast infects the lungs, lymph nodes, eyes, skin, and bone. It may also infect the joints, prostate, brain, or central nervous system.

Unfortunately, the signs of infection are often nonspecific and can be difficult to diagnose, and often vary depending on where the yeast has spread. Infected dogs may present with weight loss, lethargy, and fever, but not all dogs develop a fever. Problems with the lungs can also develop, causing exercise intolerance, coughing, cyanosis, and respiratory distress. CNS signs include neck pain, circling, and seizures. A complete blood count is usually nonspecific but suggests chronic inflammation. A cytologic examination of tissue reveals the organism in 67 to 82% of cases. Luckily, up to 80% of dogs respond well to treatment with itraconazole and amphotericin B for 60 days or more. Some dogs relapse after treatment.

Microsporum canis is a fungus that infects the non-living tissues of skin, hair, and nails. Despite its name, the natural host of this fungus is the domestic cat, but occasionally infects dogs too. As well as this, it is found worldwide, but extremely high occurrences are reported in Iran, and lower incidences are seen in the USA and Europe. It is completely absent from equatorial Africa. This makes this fungus one of the most common causes of fungal diseases of dogs.

In all cases, the fungus attacks the skin and fur of its host, causing a complex of diseases collectively known as ringworm. The disease causes alopecia, scaling, and circular lesions on the skin. Luckily, infections from this fungus are usually easy to diagnose. A Wood’s lamp will cause positive hairs to glow green. Microsporum canis infections are easily treated with topical antifungal medication. More severe cases may require systemic therapy with itraconazole or terbinafine.

Trichophyton mentagrophytes var. erinacei is rarely found in dogs. This zoophilic dermatophyte is transmitted by hedgehogs, so this disease is more common in areas populated with wild hedgehogs. In literature, infections with this organism tend to occur on the muzzle and extremities, suggesting that the dogs have made indirect or direct contact with hedgehogs or their waste. Unlike other dermatophyte species, this species causes an inflammatory response in the follicles known as kerion. Kerion manifests as moist, painful, and boggy lesions with scaling, crusting, and hair loss. In one study of Trichophyton mentagrophytes var. erinacei infection in a dog, treatment was entirely successful. Fungicidal treatment was given through oral itraconazole. Also, topical clotrimazole was given twice daily. After one month, the lesion healed and no relapse was seen.

Microsporum gypseum is a dermatophyte that causes ringworm in dogs. Unlike the other causative agents of ringworm, this agent lives in soil all across the world rather than in a living host. It prefers moist, clayey soils, particularly those containing keratinous manure. As such, the fungus infects animals that frequent areas with soil the most. This includes working dogs, rodents, and horses. Overall, an animal has to contract at least 10 fungal spores on a keratin-rich body surface to develop an infection. Unlike Microsporum canis, Microsporum gypseus will always not cause hairs to glow green under a Wood’s lamp. However, the signs of infection are similar. Infection with this fungus causes circular lesions, alopecia, and inflammation at the site. In other cases, however, the fungus can appear as impetigo, psoriasis, or scleroderma.

Depending on the organism that is affecting your dog, your vet may prescribe a range of dog toenail fungus treatments. These include oral antifungal drugs, foot soaks, and topical creams. Where treatments don’t work, a vet may remove the entire claw or amputate the third phalanx to control the disease.

Another drug is sometimes given alongside antifungals to treat leishmaniasis infections. This drug is allopurinol. Your vet might prescribe allopurinol to reduce the production of uric acid in your dog’s body. This is important because Leishmania produces enzymes that make uric acid from hypoxanthine – in short, this drug inhibits that enzyme production, causing selective parasite death.

You must keep your dog’s paws clean during treatment. After walks, be sure to clean the affected paw gently using a warm foot bath. After removing the paw from the tub, be sure to completely dry it off by patting it with a clean towel. Ask your vet about any medications that you can add to your pup’s foot bath – they might recommend chlorhexidine or nothing at all. Always follow your vet’s advice and ask before adding any medicines to your pet’s treatment plan.

Have any more questions about dog toenail fungus treatment? Feel free to refer to our Frequently Asked Questions section for more details. If in doubt, always ask your vet for advice.

Some human topical creams, like terbinafine, are used off-label to treat fungal infections in dogs. However, it is essential that you don’t simply buy a human topical cream for your pet without consulting with your vet. Certain medicines are less effective on specific types of fungus, and you risk prolonging your pet’s discomfort by not seeking out specific treatment. Your dog may also need systemic treatment alongside topical treatment. This is the case, for example, in leishmaniasis treatment.

How do I prevent nail infections?

While some nail infections are near-impossible to prevent, others can be prevented to some degree. First, always keep your pet’s environment clean. Be sure to remove waste, dirty bedding, and manage pests around your home to prevent fungal infections. Your dog also needs a complete, healthy diet to fight off infections. Also, your dog needs a bath once every three months as a minimum to maintain good hygiene. Then, be sure to keep your dog’s paws clean, especially after walks. Your dog can pick up a range of bacteria, fungi, and ectoparasites whilst walking. Lastly, and perhaps most importantly, always head to the vet at the first sign of infection. Early treatment is essential.

How do vets determine if your dog is suffering from a fungal infection?

The best way to diagnose a fungal infection in a dog is through cytology. Cytology is the study of single cells or small samples of cells to look for disease. However, cytology does not always reveal the organism. In these cases, a vet will arrange for a biopsy. For a biopsy, the vet will submit nail fragments, shed nails, or samples of the nail to a laboratory for testing. However, these samples are not the best options for biopsy. The best samples are gotten from complete P3 digit amputation, as these samples will contain the infected claw bed. In any case, the laboratory processes the sample using decalcification or H&E staining techniques. Here, the laboratory can identify the species of fungus responsible for your dog’s condition.

How long before a dog recovers from toenail fungus?

What is dog toenail fungus?

Fungi are spore-producing eukaryotic organisms that feed on organic matter. These organisms include molds, yeasts, mushrooms, and toadstools. As such, fungi are found in just about any habitat around the world. In animals, fungal infections occur when a fungus takes over a part of the body. Most fungi are not dangerous, but some types can be harmful to dogs and require quick veterinary treatment.

Dog toenail fungus treatment is essential for combatting fungal infections in dogs. If your dog shows symptoms of a fungal infection, make sure to see your vet right away. Your dog may need a combination of drugs to fully eliminate the fungus, including antifungal drugs and xanthine oxidase inhibitors.