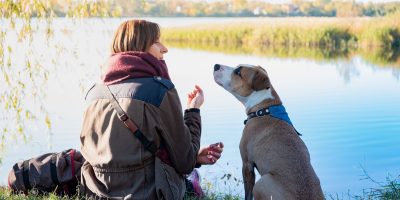 The topic of whether dogs can smell fear and differentiate emotions has been debated by many people for a long time. And if you want to find out what side is right, this article explains everything you need to know about.

Is It True That Dogs Smell Fear?

The study by D’Aniello et al. (2017) proved that dogs can smell fear through a person’s sweat and body odor. The moisture from a person when they’re afraid contains unique chemicals. It serves as a signal for dogs to identify human emotions such as fear.

Dog’s superior sense of smell also greatly contributes to their ability to pick up human emotions through odor. Their sense of smell is 10,000 to 100,000 times sharper than humans’.

Now, how can dogs detect fear through secreted sweat?

Chemosignals From Humans to Dogs

According to the study by Svartberg (2006), Golden Retrievers and Labrador Retrievers have high rankings in behavioral traits related to socialization, curiosity, and fearlessness. Thus, they are often used as dog samples.

Here’s how both dog breeds are good at smelling human emotions:

Golden Retrievers highly offer unconditional love for human companionship – and this is one of the reasons that make them easily identify different human emotions. When Golden Retrievers sense fear, they start to provide additional comfort and playfulness to reduce the negative emotions.

Additionally, Golden Retrievers are also very easy to train, and they are quick to catch up on tricks and specific commands which makes them one of the best service dogs to have.

Like Golden Retrievers, this dog breed also provides comfort and seeks reassurance from their owners when they sense fear and sadness.

Can Dogs Sense the Difference Between Happiness and Fear?

Dogs can detect emotions via body odor, facial expressions, and body gestures. Aside from this, dogs can also sense the difference between human emotions like fear and happiness.

Here are the highlights of their findings:

The latter finding is important as previous studies confirmed that dogs process emotionally negative sounds using their right brain, and positive sounds with their left brains.

On the other hand, D’Aniello et al. (2017) also proved that dogs can differentiate emotions. The researchers conducted their study by collecting sweat samples from human volunteers after watching videos that were made to evoke fear and happiness.

Here are the highlights of their findings:

Here are the answers to some of the most frequently asked questions:

What do dogs do when they smell fear?

When dogs smell fear, they lessen interactions with strangers, seek more reassurance, and comfort their owners. Dogs also tend to feel scared and anxious too; thus, mimicking the sensed emotion.

What other emotions can dogs sense?

Aside from fear, dogs can also sense emotions like happiness, sadness, and anger. Meanwhile, the study by Siniscalchi et al. (2018) shows that dogs have difficulties interpreting emotions like disgust and surprise.

During anxiety attacks, the human body produces a hormone called cortisol (stress hormone). Since dogs can smell cortisol, dogs can also sense whether someone is feeling anxious. When dogs detect a high level of cortisol, they begin to act in a more comforting manner.

Like adult dogs, puppies can also smell fear. Even though puppies are still small and young, their sense of smell is still incredible. Thus, they can also detect fear and other emotions through chemosignals.

Dogs can also sense depression. When a person is depressed, their serotonin (the happy hormone) level drastically decreases, and since dogs can smell serotonin, they can detect if it’s rising or falling.

Based on various scientific studies, it is true that dogs can smell fear and other human emotions through chemosignals. Thus, it makes perfect sense when pet owners always claim that their pets know when they are feeling sad.

Aside from that, dogs can also sense and differentiate fear and happiness using their senses of smell, sight, and hearing.