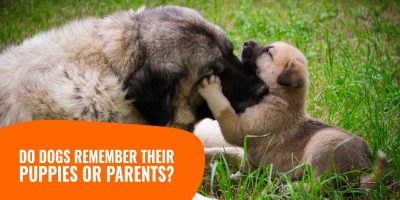 Dog memory is not well researched or known about by a surprisingly high number of owners and breeders. Many breeders and buyers wonder ‘do dogs remember their puppies or parents?‘. Whether you are asking out of interest or concern for your dog’s welfare and happiness, we have the answers.

The memory of a puppy, mother, and father dog towards their relations all differ. This is because of their life stages and hormonal influence. Not only that, but individuals differ as well depending on traits and other influential factors. So if you want to know if dogs remember their puppies or if dogs remember their parents, look no further.

Do Female Dogs Remember Their Puppies

Female dogs have such a strong maternal instinct towards their puppies. From media online to research and even witnessing this, many owners believe that mothers will always remember their puppies.

After a Few Days

Female dogs will always recognize and remember their puppies after a few days without contact. This is especially true when the puppies are young. The more defenseless and weak a puppy is, the stronger the protective instinct the mother will feel towards them. Therefore they will remember their puppies and even search for them if they are removed at a young age. Something which we strongly recommend against unless you have proper reasoning and vets advising you to do so.

Even if your bitch’s puppies are able to walk and are eating solid foods, the maternal bond will still be present and therefore the loss of a puppy will be noticed by the mother. Returning a puppy after a few days will instantly activate the mother’s memory and she will most likely become excited or protective over the individual. This can include cleaning, moving the baby with her mouth, and excessive sniffing. In summary, a mother will always remember her puppy after a few days apart.

After a Few Months

Even to us, a few months can seem like a long time and dogs can sense time, too. So it would not be unreasonable to conclude that a female dog would not remember her puppies after this period of time. However, mother dogs do in fact remember their puppies after a few months apart. Their maternal instincts will continue to exist for a while after their litter has left and this helps to aid their memory. Mothers will develop a bond with their puppies and care for them. Therefore, the space and time away from one another will not cloud the mother’s memory of her young.

After a Few Years

Whether a mother remembers her puppies after a few years or not depends on a few different factors. From her characteristics, how many litters she has had, and how long the mother and puppy have spent together. A natural bond is created between a mother and puppy due to hormonal and instinctual factors. A further bond can be created from the mother and puppy spending excess time together once the puppy has grown. The larger the amount of time a mother spends with a puppy, the higher the probability of her being remembered.

Other factors that influence whether a mother may remember a puppy is based on her characteristics or personality. Mothers who have more social personalities or caring will often form a more permanent attachment towards her puppies. This, in turn, increases the likelihood that she will remember her puppies. Mothers which are more human orientated, prefer solitude, or are of an older age are less likely to remember their puppies after years.

Do Male Dogs Remember Their Puppies

Male dogs have hormonal influences similar to mother dogs. However, the ways in which the hormones influence the father and his memory are different.

It is important to know that firstly, father dogs do not recognize puppies as their own. Therefore, they will not remember puppies as their own. However, that does not mean they will not remember the puppies. When a litter of puppies is born, the father’s reaction can differ vastly based on his behavior normally, breed, and even age. But how does this affect his memory of the little ones?

The more of a bond or parental instinct a father dog has, the more likely he is to recognize the puppies as a group from his household. His memory of them is more so targeted towards vulnerable individuals that he has seen previously. He may know of a litter of puppies that have joined the family and view them as new family members. He will not truly view them as his puppies. Furthermore, there is no guarantee that the father will display any particular recognizable behavior to demonstrate that he remembers the puppies.

As father dogs do not recognize a litter as their own, it is very unlikely that they will recognize the puppies after many years. The hormonal influence that a father receives over his memory towards his puppies does not compare to that of the mothers. The father may develop a bond towards certain puppies if they remain in the household for a longer period of time. He may begin to consider them as friends or family members, therefore there is a possibility he can remember them as such after years.

It is important to note that the personality of both the puppy and the father can influence their bond. Two calmer more affectionate dogs may bond better than one playful and one lazier dog. Therefore, the father may remember puppies that have had more of a positive impact on him.

Do Puppies Remember Their Parents?

Many reasons that owners and breeders worry if their puppies remember their mothers is due to removing them. No owner wants to take a puppy away when they could miss their mother. So let us explain puppies’ memories towards their parents.

When puppies are born they are able to recognize the presence of their mother and remember her smell to continue that recognition. This will happen in the first few moments after birth and will remain as a safety blanket for the pups until the point they can be removed from their mother. As they are so vulnerable after birth, they are completely reliant on their mother and need to stay with her. If she leaves them, for example, to go to the toilet, the puppies will often cry or move around more. This is because their comfort is gone and they are aware of her lack of presence. This demonstrates awareness and memory.

When the puppies begin to open their eyes and move around a little, their memory of their mother will deepen. From her size to her color, they will now have an image to recall alongside her scent. A dog’s scent will always be stronger than that of their eyes, but it is important to mention their memory development.

Puppies are fully dependent on their mother until they are completely weaned at around seven to eight weeks of age. So even up until the point of two months of age, these little puppies will still be the shadow of their mother, following her around. They will remember her by scent and even behavior, identifying a more protective and interactive figure than other members of the household. Even color and fur are factors which can help a puppy memorize their mother. Although, her scent will always be the predominant element that a puppy remembers and uses to identify them.

At a few weeks old, a puppy will become much more exploratory of others and the world around it. The sensitive periods of its life allow it to develop its behavior and personality for a lifetime. Yet, these little mischief makers will stay close to their mother and will always remember that she is close by.

It is most likely that a puppy will remember their mother after a few months apart. This is usually time spent without a meeting and after the puppy has been re-homed. When introducing the mother and puppy together once more, the mother will remember the puppy as well. However, the puppy is now bigger, loaded with energy and play. This can lead to some tension. If a puppy is jumping and chewing at the mother, you may believe that neither of them remember each other because of this greeting. However, the puppy is excitedly greeting their mother after recognition of her. The mother, meanwhile, may show less affection because of their energy levels.

Puppies can in fact recognize their parents, even after years of separation! There is evidence of facial recognition in dogs from a 2009 study titled ‘Discrimination of Human and Dog Faces and Inversion Responses in Domestic Dogs (Canis familiaris)’ by Racca et al. So your pup may be able to remember their mother from her scent and from her face! This recognition is not only limited to dogs but humans too.

Both facial and olfactory memory can exist for years. These memories are immediately triggered by the visuals of ta puppies’ parents or the smell of their mother in particular. They may also be able to recognize their parents if they are located in the same household or area as they also have visual memory and recognition towards objects.

About Dogs Remembering Their Puppies or Parents

To finish our article and summarize whether dogs remember their puppies or parents, we have included the most frequently asked questions with answers below.

Do dogs miss their parents?

Puppies will miss their parents if they are removed too young or if they are not provided with the appropriate amount of affection, play, and space. Adjusting to a new home is hard for a puppy and they need time to feel comfortable and safe.

Do mother dogs miss their puppies?

Mother dogs will only miss their puppies if they are taken from her too early. There reaches a point where the bitch needs space by herself and away from the puppies.

From pregnancy to birth she has had a tough and draining time and deserves a break. When the puppies are of the appropriate age, the mother will be relieved to be back to normal and have some rest.

How long do puppies remember their mother?

This all depends on the individual and their upbringing, but on average puppies will remember their mothers for years. Their memory will target their mother’s look and smell and will only take moments for them to remember them.

Do father dogs recognize their puppies?

Fathers do not recognize their puppies. From the moment of birth, they may understand that these are vulnerable and young dogs and be gentle with them. Or they may be under the impression that they are new family members. However, father dogs do not have the same hormonal influences as mothers do and therefore they do not have the need of recognizing a litter as their own.

So do dogs remember their puppies or parents? It depends. Some do and some don’t and even individual factors affect each answer. Therefore, always take things case by case. Our furry best friends are more complicated than we think!