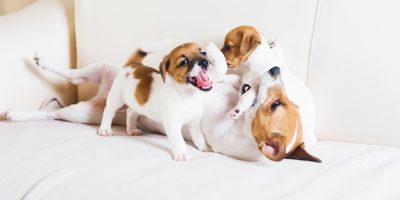 As a dog breeder or pet parent, you’ve probably wondered “is a dog temperament hereditary?” In short, several temperament traits in dogs are indeed heritable. However, the heritability of each trait varies a lot. There are some traits that are highly heritable. Others are less heritable and come from environmental factors.

Dog temperament is genetic to a certain extent. However, other things like early life experiences, traumatic events, and access to resources will also influence your dog’s temperament. To find out more about dog temperament, read on with us today.

What is Dog Temperament

In dogs, temperament broadly refers to behavior with a biological basis. The behaviors are relatively independent of learning and training. Some behaviorists see temperament as just one factor underlying personality. Overall, though, temperament traits are distinct throughout your dog’s lifetime, they contribute to things like emotionality, energetic aspects, and sensitivity to specific stimuli.

The genetic basis behind behavioral traits in dogs is of great interest to pet parents, breeders, and professionals in animal welfare. Now, we have access to many studies that look at whether dog temperament is genetic or not. We can see that there are differences between breeds as well as differences within breeds. This alone suggests that there are some genetic influences over temperament in dogs.

Indeed, several aspects of dog temperament appear to be genetic. There are several studies that take a good look at just how heritable certain traits are. Each study finds that certain traits are more heritable than others. These studies also have similar findings, often that stranger-oriented fear and aggression are highly heritable.

A study on Labrador Retrievers looked at 12 behavioral traits. Interestingly, the study found that the traits with the highest heritability were noise fear and fetching. Non-social fear was also highly heritable and was lower than the heritability found in the Rough Collie in another study.

In contrast to aggression towards strangers and other dogs, which were moderately heritable, the study’s estimate for owner-directed aggression was not significantly different. This is likely due to strong selection intensity against this trait, especially in larger breeds like the Labrador Retriever.

A 2014 study on Rough Collies in Sweden looked at fear-related problems. Nearly 3,000 dogs took part in the study. The dog mentality assessment (DMA) was used for this, and the DMA personality trait heritability estimates ranged from 0.13 to 0.25.

A heritability close to one suggests that all of the variability in the trait comes from genetics, with little contribution from the environment. In humans, many complex traits like intelligence and multifactorial diseases have a heritability somewhere in the middle.

A 2016 study looked at genome-wide mapping for several hundred dog breeds. The study finds that some types of aggression and fear are related to each other, namely stranger-oriented fear and dog or stranger-directed aggression.

A 2019 study combined behavioral datasets of more than 14,000 dogs from 101 breeds with breed-typical genotypic data. To summarize the study, the traits with the highest among-breed heritability were trainability (0.73), stranger-directed aggression (0.68), chasing (0.62), and attention-seeking (0.56).

Much like the previous studies, this study also supports the idea that owner-directed aggression is less heritable than other traits. Again, this may be because it is not a trait that is selected for in dogs.

There are several dog breeds with temperament issues to consider. What counts as poor temperament might vary depending on who you ask, but generally, these breeds may struggle with aggression and fear. These include the Chow Chow, the Dalmatian, the Akita, and the Miniature Pinscher.

While many dogs of these breeds have no issues at all, it’s important to be aware of the potential challenges of owning these breeds. Many reputable breeders are working to improve the temperaments of these breeds, keeping in mind that dog temperament is genetic to some degree.

When asked, “is a dog temperament hereditary”, the Chow Chow is a prime example of the concept at work. While many Chow Chows are calm and collected throughout their lives and have no issues with aggression, it is undeniable that aggression is a prevalent issue in the breed.

More specifically, inter-dog aggression towards dogs of the same sex appears to be the most common issue. It is very important for Chow Chow owners to socialize these dogs well in puppyhood and train them consistently. Without training and mental stimulation, Chow Chows can become nuisance barkers and aggressive towards other animals.

The Akita is an independent, powerful, and affectionate breed. A well-trained and well-bred Akita should be accepting of non-threatening strangers and should be good with children. However, Akitas can be dog-reactive. In particular, Akitas are less tolerant of dogs of the same sex. This suggests a certain level of dog rivalry.

These dogs need confident, consistent handlers who are willing to socialize and train them well in puppyhood. Without training and enrichment, the Akita can develop problems with barking, digging, chewing, and aggression. Be sure to include your Akita in family activities and do not leave them alone for a long time.

Despite being small dogs, Miniature Pinschers are best for experienced dog owners. Many owners underestimate the time and effort it takes to raise a well-rounded Miniature Pinscher. This breed is assertive, outgoing, independent, as well as energetic.

They make excellent watchdogs with their wariness of strangers. However, they are also prone to aggression towards other dogs. These little friends require plenty of training and socialization in puppyhood to prevent issues later on. Without training and mental stimulation, Min Pins can become timid and quarrelsome.

A well-bred Dalmatian is a high-spirited but dependable and athletic dog. However, there are a lot of poorly-bred Dalmatians around, and even those bred by more knowledgeable breeders may run into temperament issues. The Dalmatian is most prone to inter-dog aggression.

It is also prone to aloofness around strangers. However, where issues with other types of aggression arise, the source is often a lack of understanding of the breed’s needs. This breed is highly energetic and needs plenty of mental stimulation, otherwise, it may become destructive and anxious.

Is a Dog Temperament Hereditary: FAQ

So, is dog temperament hereditary? If you’re still unsure, feel free to check out our Frequently Asked Questions for more information. If you have any concerns about your dog’s temperament, check with your vet for advice.

Your dog’s temperament has a genetic component, so the temperament of their sire and dam will play a part in their individual temperament. However, genetics is not the only element at play when it comes to dog temperament.

At what age can you tell a dog’s temperament?

Between 6 and 8 weeks old, your puppy will already be showing signs of their temperament. By observing how they play with their littermates and interact with people, you can start to gauge the personality traits of the pup. It’s important to pick a puppy whose personality and activity level are a good fit for your lifestyle and home. Just be aware that your pup’s personality is not set in stone at this age. There are still plenty of changes that can happen as your puppy matures.

Once dogs are mature, their personalities remain stable. In the absence of traumatic events, a sudden change in personality suggests that a medical condition is affecting your pooch. Be sure to check in with your vet if your dog appears to be unwell.

What is dog temperament?

Can a dog inherit aggression?

Is dog temperament hereditary? Many traits in dogs are hereditary, but certain traits are more heritable than others. Most studies find that fear and aggression are genetic in dogs.