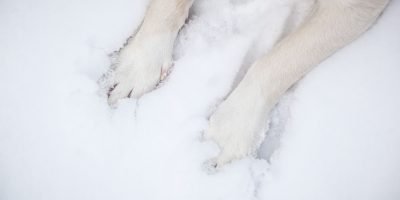 Dogs are not only loyal creatures but they are playful as well. Most of the time we see them rolling in the muddy water and sometimes even hopping in the snow. Yet, as dog owners, we may wonder whether those dogs’ paws get cold, right? Okay then, let’s find out.

Can Dogs Feel Cold In Their Feet?

The answer is both yes and no. Dogs tolerate a little cold but too much of it can be life-threatening. A study about dogs showed that there’s a heat maintenance system found on a canine’s foot. That’s all thanks to the networks of veins and arteries that activate as a heater.

Moreover, Zay Satchu, DVM said that cold tolerance depends on the breed. Alaskan Malamute, Great Pyrenees, and Saint Bernard are dogs with thick coats which are built for winter, she added.

Whereas, dogs who have thin coats such as Greyhounds and Xoloitzcuintli are more prone to the winter, says Jennifer Coates, DVM.

Also, Dr. Hiroyoshi Ninomiya from Tokyo tested if a dog’s paw withstands the -35 ͦ Celsius as claimed by a 1972 study. Afterward, he concluded its positive results and yet stated that not all breeds may adapt to the cold.

Signs That Your Dog Feels Cold On Their Paws

Yes, dog paws get cold in the snow. Yet, one may wonder, how cold is too cold though? Well, to find out, make sure to read the signs below.

How Will You Protect Your Dog's Paws From the Cold?

Regardless of breed, a dog’s paws can get cold in winter. But, if you want to prevent that, follow these 7 tips listed below on how to protect your dog’s paws in the cold.

Dr. Jeff Werber, a celebrity veterinarian, said that dogs’ paws get cold since ice gets stuck in there. Hence, dogs lick it off which causes serious infections.

Also, Courtney Campuzano, owner of Groom & Board, explained that trimming allows owners to easily wipe off debris on a dog’s paw.

Dogs’ paws can handle the snow but that doesn’t mean you won’t do regular cleanings after a cold walk. According to Marty Becker, DVM, dogs’ fur soak in ice and salt and, thus need cleaning to avoid infections.

As dog owners, be sure to remove all post-walk residues.

Walking is a good exercise for dogs. But during winter, dogs’ paws get cold too so a long walk is a rain check. Meanwhile, Katie Lytle a DVM, said that if it’s too cold for a regular dog walk then it’s better to take short walks instead.

Dr. Lytle said that rubbing balms on your fur baby’s paw can lessen the discomforts of cracks and tears. Also, Denise Herman, the founder of Empire of the Dog also supported that claim. Hence, according to her, wax helps cover and protect dogs’ paws from certain irritants.

Like humans, dogs are sensitive creatures as well. They need foot coverings too. Yet, cold streets are not the only reason why dogs wear boots.

Dogs’ paws may feel cold and get frostbites or hypothermia in conditions below 0°C, says Dr. Cathy Barnette. Moreover, Dr. Coates supported that statement. According to her, in freezing temperatures below 32°F or 0°C, small dog breeds with thin fur should be monitored and not let out.

Dr. Kelly Ryan, director of Animal Medical Center stated that it’s easy to see whether dogs’ feet get cold in the snow. According to him, dogs that shake and shiver in the snow are signs that they want to seek some warmth nearby.

How to Train Your Dog to Handle the Cold?

Dogs’ paws get cold in the snow, so how do we train them to love the cold weather? Dr. Henry Pasternak stated that while still young, dogs should be accustomed to snow. Hence, they should explore snow once in a while.

RuthAnn Lobos, a licensed veterinarian said that dogs should start with short walks. She also added that the walking exposure should be increased so they can adjust to the cold weather. Moreover, giving treats for peeing and pooping in snow can help dogs handle the cold, says Chris Roth, DVM.

Here are the answers to the frequently asked questions about dog paws getting cold.

How cold is too cold for dogs’ paws?

The cold weather affects each canine differently. Well, we still need to be cautious. Dogs’ feet get cold so they’re only allowed for 15 to 20 minutes at below-freezing temperatures. Anything below 0° causes serious hypothermia said Sara Ochoa, DVM at Doglab.

Can dogs walk in snow barefoot?

Yes, they can but only for a few minutes. Dogs have special heating pads on their feet but that doesn’t mean they can hang around the snow the whole day. A dog’s paws can get cold too so it’s best to shorten cold walks.

Can a dog’s paws get frostbite?

Unfortunately, yes. Even with special heating foot pads, dogs’ paws feel cold and can sometimes turn black, and blue. Jerry Klein, DVM, stated that all dog breeds, big or small have the risks of frostbite and hypothermia when exposed to snow for longer periods.

To what degree should you not walk your dog?

If humans could shake and shiver against the cold breeze of winter then dogs’ paws feel cold as well. Michelle Henry, a dog enthusiast stated that any temperatures below 0° C can cause lethal hypothermia and may even lead to death.

How do I know if my dog’s paws are cold?

Most people still find it hard to believe that a dog’s paws feel cold. Ryan Rucker, DVM and Veterinary Advisor to Zesty Paws, stated that the usual sign of a cold paw is if they feel cold to your touch.

Dogs’ paws get cold as well as humans who get cold feet during icy weather. Snow is mixed with toxic anti-freeze salts. It’s not safe for our canine friends to play with. Thus, we should make sure our dogs wear booties and balms and have clean-ups for their paws’ healthcare.