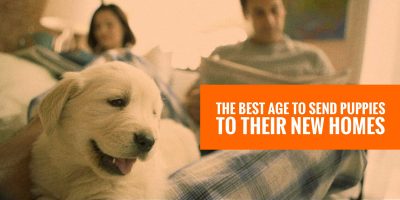 According to the American Kennel Club, the best age to send puppies to their new homes is from 7 to 12 weeks. In fact, any time prior to 7 weeks is considered too early by most veterinarians and breeders alike. Ideally, no puppy should be delivered into a new nesting place until 8 to 12 weeks to give proper time for the socialization stage to thoroughly present its advantages to the evolving pup.

The first two months of a new puppy’s life is a very crucial time in his life due to several factors concerning his evolvement. This is prime time in which a pup’s socialization factor comes into play and begins to make its full effects on his behavior with others as well as his adaptation skills. During this time, it is highly encouraged and advised to leave the entire puppy litter together and avoid separating them from their mum too early. Removing a dam’s puppies too soon can cause an array of developmental problems such as:

To better understand the mechanics of this phase of ontogeny, one must understand the principles of how socialization occurs and takes precedence. This period lasts from 6 to 12 weeks and marks the stage in which a new puppy is just learning the norms of the world and other beings around him, be it humans, or his siblings. At this time, having the litter stick together will greatly enhance their social skills and consequently, give them sufficient understanding of the inner workings of a relationship. During playtime, puppies tend to react when bitten too hard, for example, which in turn lets the other puppies know their limits of rough play. Therefore, taking a pup too early will disrupt his natural temperament and may end up creating instability in the lives of the puppies.

Indeed, increasing the generalization and socialization of puppies certainly prevents the added anxiety in long-term care. In fact, the prime reason many pups end up in canine shelters is due to behavioral issues. And these issues could have easily been prevented with the right socialized training in proper timing. Many breeders make that erroneous assumption that socialization with other pups only at the weaning stage is sufficient until they end up with problems that may not be so easy to fix.

Generally, between the ages of 7-and-a-half to 9-and-a-half weeks, the socialization fear factor comes into play in which dogs should be kept from abrupt fearful circumstances. This fear, if maximized at this stage, tends to stay with the pup until his later years and may be impossible at some point to alleviate. This will make the pup grow up to be a very anxious dog and fearful of others, thus, leading to increased aggression. This stage starts with the breeder and they need enough time to ensure a perfectly planned and performed socialization against high-pitched sounds, other pets, different humans (skin color, size, voices, etc.) as well as other stimuli (smells, agitation, cafes, etc.). Breeders need to always be in control of these situations and be very attentive. This can only be successfully completed if the work that began with the breeder is turned over and continued with the actual dog owner. That’s why the relationship between the breeder and the owner is crucial and communication should always be a high priority.

On the other hand, generalization refers to the general confidence a breeder or dog owner displays in any given circumstance, regardless of external influences. Ideally, you want to “proof” your dogs by introducing him to various environments with the same set of circumstances so he gets used to the adaptation of varying stimulations. When meeting other pets, keep the environment fairly pleasant and avoid unknown animals.

When the timing of the event is carefully planned out, this process can work wonders in both the dog’s life and the owners. Again, timing is everything. Though the time may vary due to outside factors, some countries do have a legal minimum of 8 weeks. Again, anything done between the 7th-week mark may result in an adverse chain of events.

In general, 12 weeks is an ideal time to introduce your puppies to a new home. This ensures the puppies will make the social transition with positive results and helps to eliminate uncertainty.

However, due to its later timing, many interested buyers bypass this initial instruction in favor of possessing dogs that fit their physical standards of the time. In reality, most buyers want puppies that still look like “proper puppies.” That said, they want to relish the physical traits of a puppy such as their fluffiness, cuteness, clumsiness, and of course all other aspects that fit the size of a “baby”, so it makes sense that a smaller size would be more desirable. It’s normal for owners to expect to raise their pups while they’re still young and be present during the initial stages of development. In this case, breeders tend to be under immense pressure when it comes to delivering the goods in order to appease their buyers as early as possible.

In addition to this, the more puppies that stay with the breeder, the more overall expenses that will be generated. This can cause a state of anxiety in the breeder or may result in an impatient buyer. Keeping all this in mind, in order that the owners obtain their pup within a reasonable time frame according to their age standards, and the breeder can be confident that the pups are in their prime time of socialization, the 8-week mark would still be a good age to send puppies homes and help proliferate all purposes in the long run. In fact, most breeders and buyers alike would generally agree that the 8 weeks does, after all, suit everybody. This, in turn, creates a more relaxed environment in which the puppies can grow and develop more favorably.

Make sure you check out our bestseller, The Dog Breeder’s Handbook, for modern and up-to-date knowledge on breeding dogs responsibly.