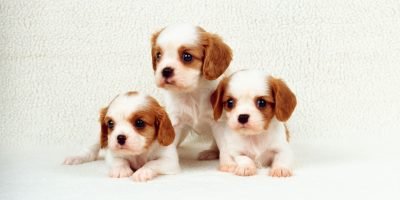 Puppies look adorable and cuddly. Let’s admit it. Whenever we see one, we can’t help but want to adopt it. Yet, before doing that, there are a few considerations to take note of. You’re not alone if you’re asking at what age puppies can be sold.

How Old Do Puppies Need To Be To Be Sold

Most vets recommend rehoming puppies when they’re at least 8 to 12 weeks old. Puppies are pretty much attached to their mothers. Aside from the milk they get from their moms, they also love the occasional grooming sessions. Moreover, adopting them very early can cause hassles since they’re very dependent on their mothers.

Puppies’ early separation can also cause problems in their psychological and physical growth. Well, without their moms, they may feel anxious and insecure about their surroundings. A study in 2017 supported that claim and stated that pets become aggressive when weaned early.

Another research in 2016 explained that weaning is an essential aspect of a mammal’s life. Hence, when mammals undergo early weaning, they become less explorative in their environment, and they grow fearful in later life stages. As a result, vets recommend weaning and rehoming puppies at a proper age.

There’s nothing wrong with wanting to adopt a puppy. Yet, as future pet owners, we must know that buying and selling puppies put a strain on their behavior. It turns out that dogs that go away from their mothers before eight weeks suffer long-term side effects of submissive, aggressive, or antisocial behaviors.

In general, puppies can leave their mom when they’re already physically strong and also no less than 8 weeks old. Well, the reason for that is pretty much simple. Further, after 8 weeks, puppies should be able to walk, run, and eat solid food. Hence they won’t need their mother’s assistance anymore.

As much as we want to adopt young puppies, well, first off, there are rules that we need to follow. We must understand that puppies look cute but weak and fragile. They’re bonded with their mothers and must not be separated very early. Further, the answer to that depends on the law.

Certain cities have very strict laws when it comes to puppy adoption. For instance, a total of 27 states in the US require that you should rehome all puppies when they’re 8 weeks old. Moreover, any younger than that is illegal and punishable by law. Well, the reason behind that is that the weaning process is usually complete during that stage.

In addition, there are other laws that state you can take home a puppy when they’re at least 7 weeks old. For instance, Virginia laws state that it’s possible to rehome 7-week-old puppies, provided they have their moms. Further, another law also stated that as a citizen of Virginia, you can sell puppies when they’re below 7 weeks old as long as potential owners will only take the animals after they turn 7 weeks old.

No rule prohibits people from adopting puppies. On the contrary, there are instances that the puppies have undisclosed medical conditions or have developed diseases within the first few days of rehoming. In that sense, your adoption is covered by the state’s Uniform Commercial Code.

The Uniform Commercial Code is the list of laws and regulations protecting buyers and sellers during business transactions. In any way that an adopted puppy was proven defective, a merchant’s warranty may be available to compromise the situation. Further, you may want to look at the table below for the top 10 states and their laws that govern the age when puppies can be sold.

Dogs, like humans, need to socialize as well. Socialization is important because it teaches dogs how to be comfortable with people and their surroundings. It allows canines to act at ease without being fearful and anxious. Moreover, it prepares pets, whether cats or dogs, to become familiar with various sights, smells, and sounds.

To be precise, socialization happens to dogs between 3 to 12 weeks old. This stage is also the most critical part of a puppy’s life. Well, what they experience during the socialization stage becomes imprinted for life. That means most of a dog’s learning happens throughout this time.

Moreover, according to a study in 2017, each year, at least 30% of animals develop fearful and aggressive behavior due to failed socialization. As a result, dog pounds and rescue centers became the house for unwanted dogs with behavioral problems.

In addition, there are two stages of socialization that all dogs need to complete. The first stage is the primary socialization period from 3 to 6 weeks, which refers to a puppy’s upbringing with his littermates. In contrast, the next stage is the human socialization phase at 7 to 12 weeks. Well, in this part, puppies learn how to get along with humans and familiarize their surroundings.

Also, the part where dogs interact with humans is the most crucial stage of the two socialization periods. This is the phase where both owners and puppies can bond through daily walks, fun games, and the giving of treats. Thus, in the age range of 7 to 12 weeks old, puppies can be adopted and exposed to different situations.

Further, bringing a puppy home at eight weeks is still the best solution to prevent a dog’s behavioral issues. Well, come to think of it, at eight weeks old, that’s the peak of their human socialization stage. Hence, that’s the most ideal age to bond with a puppy and form lifelong experiences.

The weaning stage is essential for all types of mammals, especially dogs. Weaning is transitioning a dog’s milk diet to solid food. This is the stage where they no longer depend on their mothers’ milk for nutrition; rather, they start to eat solid food to fill their tummies.

Weaning usually happens when dogs are between 3 to 4 weeks old. This phenomenon occurs as a result of dogs growing their first set of teeth and their instincts telling them to try other food variations. Moreover, the weaning phase is also the start of more refined behavioral changes in dogs.

The general rule is that you can only sell a puppy when they’re fully weaned. Weaned puppies are more capable of surviving under certain conditions than unweaned ones. They are more emotionally stable and don’t need motherly comfort. Also, they are easy to take care of since solid food is more accessible than milk.

Before the rehoming process, ensure that the puppies are able to digest solid food. This prevents future problems such as loss of appetite, vomiting, and diarrhea. This also ensures that newly adopted puppies have more than a 50% chance of survival.

At What Age Can Puppies Be Sold: FAQs

Getting a new puppy is not as easy as it seems. Further, you can read the frequently asked questions owners have about how old puppies have to be to sell them below.

Can I rehome puppies at 6 weeks old?

No, you can’t. The minimum age that puppies can be sold is at least 7 weeks old. Any younger than that is too risky and it may be punishable by state laws. Well, puppies under that age are fragile and not completely weaned. Hence, they’re prone to emotional and physical issues when they suddenly face a new environment.

Can a puppy leave at 4 weeks?

No, it’s not possible. Most vets and breeders agree that the conventional answer as to what age you can sell puppies is at least 7 to 8 weeks old. Also, in other instances, many breeders even sell them a little later and the reason for that is to ensure complete development.

11 to 12 weeks old is still a fine age to adopt a puppy. On the contrary, larger dog breeds don’t have to wait that long to be adopted. Generally, puppies should be 7 to 8 weeks old to leave their mom.

Is it illegal to sell puppies before 8 weeks?

In some laws, it’s not. Yet, many people misunderstand the concept of how old should a puppy be adopted. To be precise, there are places that allow listing puppies for sale before 8 weeks, but prospective owners will only be allowed to get them once they reach 2 months or 8 weeks old.

What is the best age to get a puppy from a breeder?

At 8 weeks old, puppies can be sold to ideal owners. Most vets and breeders formulated that age in accordance with puppies’ physical and emotional development. Any younger than that can hinder growth, and at the same time, a little later than 12 weeks old is the end of the socialization stage and may be quite difficult to handle.

Owning puppies comes with great responsibility. Well, you can’t decide to adopt one without considering its age and proper development. Take note that puppies can only be sold when they’re at least 7 to 8 weeks old. Hence, if you’re really into adopting one, ensure that the puppy is fully weaned and in its socialization stage.