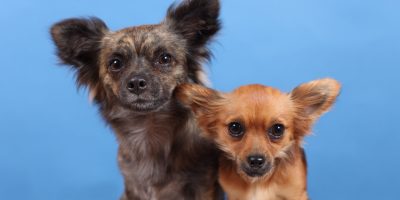 Assumptions that smaller dogs are less intelligent originate for two reasons. Firstly their brains are physically smaller than that of larger dogs. Secondly, many of the dogs that we use for training, a skill associated with high intelligence, are medium to large-sized breeds. But are small dogs less intelligent or is it just incorrect assumptions?

According to a study conducted and a published book by Stanley Coren, only one dog breed in the top ten most intelligent dog breeds is small. The Papillon achieved rank number 8 through 200 interviews given to dog-obedience judges. Only one small dog in the top ten most intelligent dogs does not necessarily indicate that larger dogs are more intelligent. Furthermore, this investigation looked purely at a dog’s ability to learn commands. Therefore, other areas of intelligence or influencing factors may not have been considered. This may present a biased perspective of their intelligence.

However, Horschler et al. compared dog breeds and their intelligence in varying categories including their short-term memory and ability to control themselves. The results reflect that larger dogs have a higher cognitive ability than that of smaller dogs. With a sample of 1,888 dogs as well, the results show a high level of validity and minimize the chance of bias. An explanation for this could be that a larger brain has more neurons connections due to there being more room for neurons. Therefore, the brain can pass more information and arguably, more quickly, leading to a higher level of intelligence. Therefore, from what information science currently has, smaller dog breeds are less intelligent than many large. However, every dog breed is different and individual factors will influence their own IQ.

Albert Einstein once said “Everybody is a genius. But if you judge a fish by its ability to climb a tree, it will live its whole life believing that it is stupid.” This not only applies to the differences between species, but breeds, and individuals as well. Some dog breeds are more intelligent in one aspect than another, and this can relate to individuals as well. Therefore, it is important to recognize that the intelligence a dog has can be targeted to one area as opposed to generalized. Some dog intelligence categories include:

Therefore, a general assessment of a dog’s intelligence may not accurately reflect their capabilities in all these categories. Furthermore, referring back to Horschler’s study, social intelligence was a category that size did not influence at all. Further tests could help to identify smaller dogs’ strengths and where their intelligence excels. It is important to recognize this as it helps us to identify what breeds excel at what and where we could use their benefits in a working environment. Furthermore, we can house dogs more appropriately with families. One example is a dog with higher social intelligence. They may be a better fit for a home with a dog in it already.

You can measure dog intelligence at home using a series of easy tests. Scientific tests are a lot more thorough, however. Every method of assessment though has its downsides. Those conducted through questionnaires and interviews may be subject to bias or miscommunication. Whereas observationally-based interviews may miss behavior or misinterpret it. Combining these methods offers the best solution as you get data you can compare. Professional researchers will also use a large sample to try to eliminate anomalies. There is no right method, it is about controlling the variables that could negatively affect the results.

As for the actual methods used to measure intelligence, it depends on the type of intelligence. Generally, there are a select few tests that are conducted. One is covering your dog’s head with a towel and seeing how long it takes them to remove it. This is a form of measuring their problem-solving abilities and the time it takes reflects their capabilities. Another common test is hiding a treat under a cup, moving the cups around, and seeing if your dog knows which cup it is under. This helps to test their short-term memory. Involving the use of tasks concerning multiple categories of intelligence is the best way to get an overall grasp of a dog’s intelligence.

Horschler’s study sent their participants to a website with instructions for the study. This is where they were guided through the cognitive exercises needed to measure their IQ. There were ten different tests that could be given to the participants. Many of them were repeated in order to see if the data stays the same or changes. Whether this is due to anomalies or learning. However, with the family and owners measuring and recording data, there is a chance for bias or misconstruing the results. This is due to owners having a preconceived perception of their dog’s personality, reception, and responses.

Horschler found that larger dogs did have a higher level of executive function. In other words, their cognitive or mental abilities are more advanced than that of little dogs. Due to their large sample size of nearly 2,000 dogs, they should have a wide representation of small and large dogs. However, unless the data had 50% of their sample as small dogs and 50% as large, the results will be biased. With this study, they drew the conclusion that the larger the dog the higher the level of their executive function.

However, there are still many dog behaviorists that believe a lot more evidence is needed before a conclusion can be drawn. Studies need to measure all areas of intelligence and use accurate sample sizes to compare breed sizes properly. It is an ongoing study to truly analyze their behavior and draw conclusions as no study is perfect and there will always be external variables.

Got a few more questions about dog intelligence and height? Take a look below for some more answers.

What is the least intelligent dog?

Ironically, a large breed of dog is the least intelligent, the Afghan Hound. This is based off of the 1994 book ‘The Intelligence of Dogs‘. Coren ranks them 138th out of 138 and they are in the category of lowest degree of working/obedience intelligence. Other breeds that Coren says to have low intelligence include the Chow Chow, Basenji, and Beagle to name a few.

Who is the smartest dog in the world?

The smartest dog in the world is a Border Collie named Chaser. Her memory is phenomenal with her being able to remember names of 1,000 toys, memorize more words and commands than most dogs, and have the same cognitive abilities as a toddler. Border Collies in general are the smartest dog breed available. They are able to learn tricks and adapt more quickly than any other breed arguably.

Scientists currently believe that smaller dogs are less cognitively adept than large dogs. Therefore, scientists deem them to be less intelligent. However, this research targets two main areas: self-control and short-term memory. Firstly, that cannot summarize a dog’s intelligence as a whole as it only analyzes two areas of their intelligence. Furthermore, researchers have to look at everything to see what dog sizes excel in which areas and then to find an overall conclusion.

How big is a dog’s brain?

The ratio of a dog’s brain to body is 1:125. This applies to all breeds as the ratio works alongside the breed’s retrospective size. A smaller dog will have a smaller brain in comparison to a larger dog, but it will be the appropriate size for the rest of their body and skull.

Do small dogs have smaller brains?

The size of a dog’s brain is retrospective to the size of their body. Therefore, smaller dog breeds have smaller brains. If they were to have the size of a large dog’s brain then it would either not fit, or be so tight that they would have constant pressure on the brain. This can lead to pain, seizures, and mobility issues. Although it can lead to death in severe cases. This is why proper breeding is so crucial to ensure that dogs have healthy proportions and they do not have pressure on their brains.

When the brain is formed in the womb, it grows alongside the rest of the body. Therefore it will be the appropriate size in comparison to the body, as long as the puppy is healthy of course.

In conclusion, with the current research and studies available it does appear that generally, the smaller the dog the less their general intelligence. However, each breed and individual will differ. Furthermore, some breeds or sizes of dogs may have their intelligence targeted to a specific area. This is why behaviorists and scientists need to conduct more tests. Just because larger dogs have been found to excel with memory tests and self-control, does not mean that smaller dogs cannot excel in other IQ categories. To properly conclude whether a dog’s brain size or body size influences, further studies will need to be conducted.