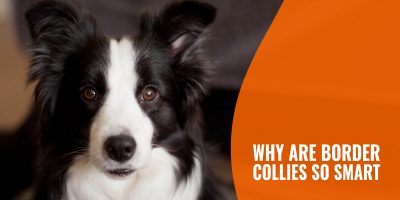 Border collies are famous for a lot of things; their beautiful markings, their intense stare, and most of all, their intelligence! But why are Border Collies so smart?

Originally bred to herd sheep in Great Britain, Border Collies are often found competing in sheepdog trials, sports, and even performing on stage! This is because they are universally recognized as the most intelligent breed of dog in the world and have the ability to learn seemingly limitless commands very quickly. So, let’s take a look at exactly what it is that gives Border Collies their unique smartness.

Why Are Border Collies So Smart?

According to neurologist Professor Stanley Coren, 51% of a dog’s intelligence stems from their genes, and 49% from their environment.

This is interesting, as recently, an episode of the scientific series Nova Science Now reported that a gene called CTNND2, responsible for normal cognitive development in humans, could also be responsible for high levels of intelligence in Border Collies, as their genome shows selective breeding for this gene.

What are the Criteria for Dog Intelligence?

Stanley Coren is famous for his works investigating the psychology, emotions, and intelligence of dogs. His 1994 book The Intelligence of Dogs is widely considered the definitive ranking of dog breeds by intelligence.

The first and last tests were carried out via learning and following commands. The second test involved recognizing social/emotional cues, memory, and problem-solving. The Border Collie came out on top of tests, with the Poodle coming second and German Shepherd in third.

Beyond The Intelligence of Dogs, there is much evidence that proves how brainy the breed is! Past scientific studies have concluded that most dogs can learn up to 165 words, while the average Collie can learn around 250. However, this may have drastically underestimated them, as this has been surpassed a number of times.

Including by Betsy, a Collie who’s family submitted her into a National Geographic Magazine competition that was looking to find intelligent pets. Betsy knows more than 340 words and gestures, including the names of people in her life, places, toys, and commands.

And famously, in 2013, American ethologist Dr. John W. Pilley published a book about his dog, a Border Collie called Chaser, who was able to learn and retrieve over 1,000 of her toys by name and a number of verbs. Chaser, who has since passed away, has been described as the world’s smartest dog and had the most tested memory of any non-human animal.

How Smart Are Border Collies Compared With Other Breeds?

Taking a closer look at the rest results in The Intelligence of Dogs, the brainy Borders are truly in a league of their own. They were able to learn a new command in fewer than 5 repetitions, and follow a known command on the first try with over 95% success.

How does this compare with other dogs? Breeds were divided into six categories; brightest, excellent, above average, average, fair, and lowest intelligence. The ‘average’ dogs learned a new command within 25-40 repetitions and followed a known one on the first try at a 50% success rate.

This means that Collies are five times faster at learning new things than the ‘average’ dog, and at least twice as obedient. Not that there’s anything wrong with average! All dogs are special in their own way and geniuses or not, we love them regardless.

How Smart Are Border Collies Compared To Humans?

Like humans, every dog is different and there are many kinds of intelligence; academic, creative, emotional, etc. Therefore, it is hard to exactly quantify any animal’s intelligence, especially in relation to our own.

But if it were broken down into school-like subjects, according to Stanley Coren, the average dog’s linguistic capabilities rival that of a 2-year-old human child, with the Border Collie’s being closer to a 3-year-old, and their ‘basic arithmetic’ trumping that of a 3 or 4-year-old.

Meanwhile, the majority of dogs’ social smarts and emotional intelligence are much closer to the average adult human. It’s not all about book smarts!

Ask any Collie owner if they are good dogs to have – and they will tell you that they are the best. But that doesn’t mean they’re for everyone. The Border Collie’s abundant energy, alertness, and intense, obsessive, vocal nature require a specific kind of person or family; high energy, fun, and patient. Border Collies require a minimum of two hours of physical exercise a day, and even more mental stimulation. (And they don’t usually slow down much with age!) But with high intelligence, comes extremely low tolerance for boredom, and when Collies get bored, they can become destructive.

Expecting a Collie to make do with a few squeaky toys just isn’t enough. The majority of the time, these dogs need mentally stimulating toys and games, like hide & seek. That said, many Collies with working DNA love a classic game of fetch, as it exercises their herding instincts and they can stalk the ball like a sheep!

Though Collies are intelligent, they are slow to mature emotionally and usually aren’t mature until 3-4 years old. They’re also obsessive by nature. In a dog receiving lots of stimulation, this will manifest by wanting to play the same games over and over again. In a bored dog, it can result in distressing compulsive behaviors. Collies will quite literally never tire of playing their favorite games, so patience is essential. If you are able to take on a Border Collie, you will not regret it. Collies make the most loving, intuitive, sensitive, trustworthy, and loyal companions you could ever ask for.

How To Train A Border Collie

Just because Collies are clever, doesn’t mean training is always easy. With intelligence comes independence, and Collies, especially those with working DNA, can be almost as stubborn and strong-willed as Siberian Huskies.

This means they have to want to do as they are told. And although they are taking in everything you are teaching them, they may well choose not to comply. In order to avoid this, you have to build a bond. Border Collies are focused on what they want. If you set aside plenty of time each day to spend fun, quality time with them, they will want to please you.

Because of their obsessive, alert nature, you must nip any bad behaviors in the bud early on before they become habitual, and training sessions must be concise and positive. Their attention easily shifts if something is boring. But do it right, and Border Collies can learn to do almost anything!

How To Test Your Dog's Intelligence

Below are a few simple tests to see how clever your dog is.

Sit in the same room as your dog and pretend to start crying. If your dog comes over to you and tries comfort you by making some kind of physical contact, they are displaying doggy empathy.

Put three cups upside down on the floor in front of your dog. When he is watching, place a treat underneath one of them. Wait a minute & ask him to find the treat. If they get it on the first try, congratulations! Your dog is a genius. To add another layer to the test, move the cups around before asking your dog to find the treat.

This time, place a treat under a piece of furniture that he can only reach with his paws. If he reaches under it to get the treat – he’s displaying good problem-solving skills.

Do you have a Border Collie? What do they do to let you know just how smart they are? Let us know!