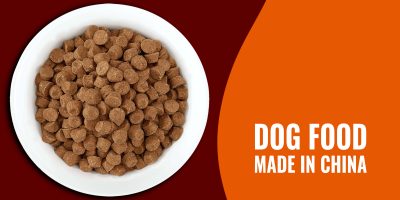 Since pet food recalls happened in 2007, the public has been hesitant to buy any dog food made in China. The melamine poisoning made pet parents double check food brands for their fur babies. Also, the bad reputation of these jerky treats made citizens more cautious, especially of food coming overseas, due to different testing policies.

But how sure are we that Chinese dog food is or is not of proper health standards after this event? Most dog food labels say where these products have originated from and their testing. However, there are instances wherein people find ingredients that came from China and may have had different testing. Let’s try to find out how we can protect our pets from falling victim to poisonous dog treats.

Most dog owners could not forget the toxic dog treats that killed many pets more than a decade ago. These deaths among cats and dogs resulted in an FDA pet food recall on this Chinese made food for dogs. Some may not remember this heartbreaking story, so let us look back on this pet history and learn from it.

Chinese manufacturers did not add toxic melamine directly to pet food that caused the deaths of cats and dogs. Instead, they mixed the chemical to premixes as a cheap protein content booster. Unfortunately, people found this out only after several felines, and canines already died. And eventually, in 2007, the FDA had to step in and test the pet foods.

Since almost all pet food manufacturers used premixes, they had to recall not only Chinese dog food. As a result, this unfortunate event also affected a lot of manufacturers worldwide. And, in 2008, the jury indicted two Chinese businesses and an American company relative to the poisonous ingredients in pet food.

We understand that some of these brands are as follows:

You can find more brands and details about the 2007 pet food recalls scandal on this Wikipedia article, and this timeline.

The 2007 recall of dog food brands from China was the largest one in US history. It also greatly affected pet shelters. Since contamination affected most pet foods, pet shelters needed to find alternatives to feed the animals in their shelters. Some had to cook pet food to meet the food demands of the animals under their care. For other shelter owners, they resorted to human foods that are safe for dogs. However, this was costly and hard to sustain.

Nevertheless, most shelters had to rely on pet food donations to ensure that animals would have something to eat. And, due to the widespread use of poisonous ingredients, they had to discard the recalled pet foods they had. They had no choice, even if it meant that it would hit them hard financially.

Thousands of animals ate the poisoned pet foods made in China. And, many of these animals got sick, worse died. When the melamine and cyanuric acid combined, they formed crystals in the kidneys of the dogs and cats. These crystals eventually lead to renal disease and failure.

Affected pet owners decided to file class-action suits. The court consolidated these cases and addressed it by a $24 million settlement. Half of this money went to pet owners while the remaining half went to lawyers’ expenses and other fees.

Owners of affected animals considered the amount minuscule compared to what they went through and spent on medical treatments. Meanwhile, pet parents of animals that died said that their dogs and cats were irreplaceable. Thus, despite the settlement, manufacturers were not able to regain the trust of the public on their products. Consequently, pet owners started to appreciate the importance of using natural foods for their pets.

The immediate response of the government over this pet food incident was the closure of a Chinese manufacturing company. Also, the government indicted the businesses involved in the Chinese dog food risks. And, in 2011, the FDA came up with the Food Safety Modernization Act (FSMA). The FDA designed the FSMA rules to make clear specific actions to prevent food contamination. These rules apply to both human foods and food-animal feeds, including locally made and Chinese dog food.

Some provisions immediately took effect, like the emergency FDA access to company records. Also, it provides the FDA an authority to mandatory recall products in case a company refuses to do it voluntarily. As for concerns on foreign suppliers, the FSMA has a Foreign Supplier Verification Program. It obligates importers to have plans in verifying that their foreign suppliers comply with hazard analysis and preventive controls program. The FDA also has a scheduled inspection and re-inspection of facilities to ensure that they pose no health risks.

Effects of Melamine on Dogs

Melamine is a small, nitrogen-containing molecule. It has several industrial uses, like being a binding agent and flame retardant. Also, manufacturers use this chemical as part of the polymer in the production of plates and cooking utensils. Moreover, manufacturers use it to produce glue, countertops, laminates, and other construction purposes.

Combining melamine and cyanuric acid could form crystals in urine and kidney tissue, and eventually, kidney failure. A study conducted in 2007 showed that when given separately, melamine or cyanuric acid did not cause renal failure in cats. But when they gave both compounds together, the cats showed signs of intra-tubular crystals and renal failure. The FDA continues to study the interactions of melamine and other related compounds to find how they cause pet illnesses and death.

Further, there had been issues with Chinese dog foods. And, researchers linked more than one chemical substance with the pet food problem. Even veterinarians posed concerns regarding the symptoms on the dogs compared to the ingredients of the pet food product. Nevertheless, here are some other chemicals relative to Chinese dog food contamination, aside from melamine:

Propylene glycol – This ingredient provides moisture in dog food and commonly found in wet food products. The FDA approves of the use of this substance for pet food products.

Mycotoxins – These are by-products of mold metabolism in grains. It has significant adverse effects on your dog’s health. Corns, wheat, rice, and other types of grains contain mycotoxins. And, producers use these grains as inexpensive additives in pet foods.

Cyanuric acid – Scientists found this compound in the toxic dog foods in 2007, together with melamine. Aside from kidney failure, some say that it has other biological effects on the body like necrosis.

Risks of Dog Food Made in China

Be wary of the signs that your dog has had improperly made food, such as those of the 2007 poisoning. These dog foods include chicken or duck jerky and jerky treats wrapped in fruit, yam, or sweet potatoes.

Remember that the symptoms can be simple ones or life-threatening as well. These symptoms may emerge within hours or even days after the ingestion of the contaminated food. So, be in a constant lookout regarding your pet’s health and of the following conditions:

Meanwhile, the veterinarians who handled the cases of the affected dogs reported the following risks and problems:

Dog food contamination was a widespread problem in China because they had no regulations for pet food manufacturing in the country. Further, China has no clear set of rules that govern pet food products. What they have is a department handling the approval of human foods.

Secondly, local governments in the country give more importance to quantity over quality. Additionally, China has a wide range of environmental pollution concerns, that even human food is getting contaminated. So what more can you expect with pet food production if there is already a problem with human foods?

However, the Chinese government was never remiss in addressing the reports of dog food contamination. The country implemented new standards and guidelines to address these concerns. China even created a separate government agency to assess and gather information about pet food producers. Further, they offered rewards for those who would report companies with inappropriate production practices. Finally, China imposed death penalties for those responsible for food contamination, especially when there are human deaths involved.

China is America’s third-largest food importer of pet food products. However, China has no comprehensive laws when it comes to pet food manufacturing. Although they have rules for human food poisoning, they don’t have strict penalties of wrongdoers relative to pet food safety.

Unfortunately, the FDA does not generally inspect China’s dog food imports, and they always find its way to US shelves. But, seeing “Made in the USA” on the label does not necessarily mean that all ingredients came from America.

Nonetheless, China is not the only country that is guilty of pet food contamination. Thus, you should get information about the source of the ingredients of your pet’s food. Yet, pet food companies are not obliged to give you where their ingredients come from. So, it is always wise to purchase pet foods from trusted manufacturers.

Dog Food Brands That Are Made in China

Many product ingredients come from China. Aside from pet foods, many countries import substances for vitamins and supplements from them. Thus, it is tough to avoid brands and products without any components coming from China.

Pets eating commercial food products, like kibble and canned foods, get nourishment from the added supplements and vitamins. We cannot shun away from these pet foods since our dogs also need them. If only we can provide our pets with a fresh kill for their daily meals. However, some manufacturers look for sources that offer lower prices. And China is one of the countries that offer affordable pet food ingredients.

Below are some of the manufacturers, we believe, sourced their pet food ingredients from China as of May 2015 (source).

Take note that the following list is a few years old and might be outdated as of today.

So, if you think you are getting China-free dog food, you may have to think again. Always make an extra effort to find out the content of your pet’s food and supplemental diet. You can call the manufacturer to ask about the protein additives and glutens as ingredients. You may also want to ask the country of origin of these additives. And, if you can, feed your dog several different foods. This way, you won’t have much trouble removing a brand once recalled.

Dog Food Made in China – FAQs

Before giving your fur baby a commercial dog food, it is wise to double-check the contents and ingredients. You don’t want to give something to your pet that you might regret in the end.

What Dog Foods are Made in China?

Is Purina Dog Food Made in China?

Purina PetCare products were some of those recalled in 2007. Although most of their dog foods are made in Missouri, USA, some of their treats may be from other countries, including China. And, even if these products are from the US, it is not easy to find out where the ingredients come from. So, better do some research and check with the manufacturers if you have doubts about certain products.

Are Dog Treats Made in China Safe?

Like every country, some dog food brands are safe and some are not. Always check the labels, testing, and food regulations before a purchase of dog food, regardless of country.

Is Beneful Dog Food Made in China?

Beneful is a product of Purina, which has a factory in China. Purina also imports ingredients from this country.

The best you can do is to stay clear of dog foods from China. Especially, those that had a history of contamination like chicken and duck jerky products. You can try cooking your pet’s food yourself to ensure your dog’s safety and health. If not, you can look for pet foods that have human-grade ingredients or those sourced from the US. It is also for your pet’s best interest if you purchase freshly-made and locally-produced products, instead.