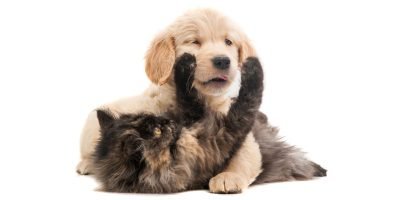 If you have pet dogs and cats in your house, you can see them barking or meowing at each other when they meet or play together. It can be interesting to watch them, but do dogs understand cat meows and vice versa?

We know that humans can communicate with each other, but it still intrigues what goes on inside our furry friends’ minds. How do dogs and cats communicate if they tell different meanings whenever they do gestures and body language? Read ahead for you to know!

According to research by Dennis C. Turner about the social interactions of cats, these felines use olfactory, auditory, and visual forms to convey what they want to say to the people and other animals around them. Likewise, Siniscalchi et al. stated in their study about communication in dogs that canines also use visual, olfactory, tactile, and acoustic ways to communicate.

Since both animals have similar communication methods, can dogs communicate with cats? The studies above signify that dogs can understand cats in the ways they conform to each other. For instance, dogs can know a cat feels displeased when they see it hissing, yowling, or scratching. They can sense that these sounds are alarming; hence, they realize the message their cat friends want to say.

Moreover, dogs can learn to associate cat meows with specific moods if they have been around the cat for a long time. They can adapt to the cat’s behavior and know how to react to such sounds and gestures.

Despite their ability to know what each other wants to say, you can still notice that dogs and cats can communicate unclearly because they do not have a Wernicke area in the brain for understanding languages. A few of their body language and gestures are also dissimilar, leading to misunderstandings. This article will further explain those below.

Why Do Cats Meow At Your Dog

Since there is a positive answer to the question of can dogs and cats communicate with each other, you can also wonder why your cat meows at your dog instead of using physical cues. Felines do not express their feelings through meows at their canine friends, so there can be a reason behind this situation.

In research by Tavernier et al. about feline vocal communication, cats only meow to their owners and fellow cats to say something. Prato-Previde‘s study about domestic cats’ vocalization supported this idea and stated that felines meow to talk to humans for food, concerns, and other reasons.

Moreover, cats use vocalization with their owners other than dogs because they know that using body language is more convenient with pups. Since dogs use gestures and physical cues, felines do not waste energy producing sounds to communicate with them. Despite that, note that your cat feels intimidated and intrigued by your dog once it meows loudly at you while looking at the latter.

Cats can also show their distress and fear of dogs in different methods, such as yowling. They will look at your dog while giving off a long meowing sound to get your attention and to threaten the canine. Otherwise, they will not exude such sounds if they feel comfortable with other pets.

Can Dogs and Cats Communicate?

Dogs and cats can communicate through body language, sounds, and facial expressions. Even though they cannot perform verbal communication, unlike humans, they can still express their feelings, moods, and intentions to provide a basic understanding to their friends.

Dogs and cats possess a nature of knowing what the other wants to say once they get used to each other’s presence and behaviors. They can realize the meaning behind every gesture when they share the same personality and habits and when they get along very well. Although they are not similar to humans with speech comprehension, they can still impart context to other animals and people.

While these pets can express themselves to each other, they cannot avoid misunderstanding due to language barriers and differences in their body language. For instance, your dog can misinterpret your cat’s actions, leading to fear or aggression. This situation will then require time and effort for adjustments and learning.

Some cats may also suddenly meow a lot and your dog may think that it is directed toward them. Since dogs cannot easily understand what a cat’s meow says, then it can result in miscommunication and cat-dog fights. Even though dogs have a better understanding of human emotions, it does not necessarily mean that they can easily understand cats as well.

As previously mentioned, cats and dogs have physical cues and gestures that can be similar or different from each other. While these things affect how these animals communicate, unfamiliar cats and dogs can pick fights due to misinterpretation of body language for aggression.

As a pet owner, you can also confuse their meanings because they can be completely different: one with a positive message and the other with a negative.

Wagging tails is a dog’s friendly gesture when they feel happy and relaxed. While this action shows optimism in dogs, cats convey an entirely different context. Felines wag their tails when they feel angry, annoyed, or agitated.

Thus, if your dog wags its tail near your cat excessively, the latter can feel more displeased about it.

Relaxed cats will tend to close their mouths. On the other hand, dogs open their mouths when they feel the same. Once canines feel tensed and stressed, they will slowly shut themselves. They can also pull their lips back at the corners and start panting rapidly to show increased stress.

Baring teeth is another physical cue whose meanings are poles apart in dogs and cats. Canines show this action when they are happy and enthusiastic, while cats will do it for aggression and threatening. Once your dog bares its teeth, keep it apart from your cat because the latter can misinterpret it.

Cats will have an arched back whenever they play with themselves or their littermates. They can also have this position when they feel scared and afraid. In dogs, an arched back can mean suffering, which indicates that your dog is currently hurting due to gastrointestinal distress and spinal pain.

Once a cat points its tail upwards, it wants to say that it feels happy, content, and relaxed. In contrast, this friendly gesture in cats means aggression in dogs. Dogs can also do this physical cue to signify an illness or tail injuries. If you notice that your dog looks unusual, check its condition immediately.

Cats and dogs expose their bellies to you once you have already gained their trust. While these animals tell you they are comfortable around your company, note that cats can feel annoyed when you suddenly rub them whenever they show their tummies. Be careful before touching your feline friend because you can break their trust otherwise.

Your furry friends will stiffen their whiskers whenever they feel threatened or want to be aggressive. This body language also means they are alert to whatever happens next around them, so you must also keep an eye on them. Furthermore, dogs can also extend their whiskers outward to show more aggressiveness.

You can know when your cat or dog feels scared whenever they tuck their tails between their legs. They can also do this physical cue to cover their belly and appear smaller because they are insecure, afraid, anxious, or stressed. If there is a dominant person or animal around them, this gesture can also mean they submit themselves to that individual.

Prepare for attacks and fights once you see your dogs and cats have dilated pupils because they can start being aggressive, fearful, or afraid. In contrast, playful and excited felines can also have dilated pupils when they get ready to play. If they remain dilated for a long time, consider bringing them to the veterinary clinic.

Cats and dogs can also ask for space; that’s why they show it by flattening their ears. They want to tell you they feel afraid and uncomfortable, so they need to hide in their favorite spot to feel secure. Scared dogs will also flat their ears against their head when aggressive or timid.

How to Make Dogs and Cats Get Along

Since you already know the answer to do cats and dogs understand each other, the next thing to learn is how to make these animals get along well. Knowing how you can turn your pets into friends is necessary, especially when you have recently adopted one while you have an existing one in the house.

Slowly Introduce Them To Each Other

If you have recently recruited your cat or dog to be a new family member, the other pet can feel strange about having a fellow animal inside the household. To prevent fights, you can start by providing them with a safe and warm environment to interact. Before letting them play together, slowly introduce them to one another in the friendliest way.

Allow Them To Have Time Together

Since your pets will soon become friends, you can leave them with some alone time to let them play and become familiar with each other. They will use that period to explore their future friends carefully. In this situation, you must still be alert so you can handle things when they get out of hand.

Give Them Time Away From Each Other

After giving your pets time with each other, you also need to separate them to give them space. You can provide them with separate beds, mats, food bowls, and areas in your house. Doing this step will also enable them to leave their scent on their personal belongings. It also allows the other pet to get used to the smell.

Like humans, dogs and cats can feel jealous when you tend to give more love and attention to the other. It can lead to sadness or aggression. To avoid upset feelings, ensure that you spend equal time with both pets. Give them the same amount of treats and care. If they know they receive similar things, a stronger bond can arise from them.

Be Mindful of Their Body Language

Since dogs and cats have different body language and gestures despite similar communication methods, you can get confused about their physical cues. Once you unintentionally switch what they want to say, things can worsen, leading to misinterpretations, aggression, and fights. Before adopting both animals, you must know their differences thoroughly. There are also several dog breeds that are really good with cats.

Do dogs understand cat meows? The answer depends on how long your pets have been together. Dogs could know what their cat friends want to say if they learned the latter’s behaviors and moods. Once they have known each other, they can exchange feelings and messages through body language and gestures.