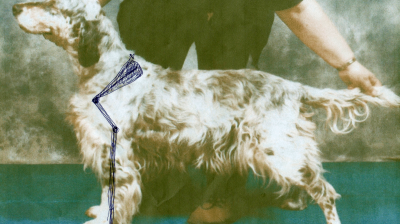 In my previous articles I have compared the Breed Standard of 1872 by Edward Laverack, our breed founder, to that of today’s current standard published by The Kennel Club 2009.

This time I want to try to show you in diagrams and photos how to recognise a correct, well laid back, or oblique shoulder, with explanations.

I consider this to be the main cause of the changes to our breed, and it must be recognised, and taken into account when considering a stud dog. Things must improve or the essentials of our beautiful breed will be lost forever.

Here is an article which I wrote for our English Setter News Letter, which was countersigned by several breed specialists and printed earlier this year.

As Kennel Club judges, approved to award Challenge Certificates in English Setters, we have been entrusted to assess and direct the future of the breed, considering its health, soundness, temperament and fitness for purpose.

Over the last 40 odd years there has begun a subtle change in the breed’s conformation. English Setters were bred to cover acres of moorland, effortlessly, tirelessly, and with grace. The dog’s correct conformation, front and rear structural balance being equal can only achieve this.

An English Setter should have a shoulder angle of 45% so that it has reach and scope, and an equally balanced rear structure to provide drive.

Many upright shoulders have been accepted as the norm and even awarded top honours in recent years, whether from ignorance or an inability to assess the dog’s conformation.

Anyone used to riding and caring for horses would immediately recognise a good shoulder placement. In a correctly built horse the saddle sits far back behind the wither, leaving as much in front of the saddle as behind, giving a beautiful smooth, comfortable, daisy-cutting stride. When a saddle is fitted to a horse with an upright shoulder, the horse’s neck rises straight from the wither and pommel of the saddle, and there is little neck in front of the rider. The gait is choppy and uncomfortable.

So it is with English Setters. If in doubt at being able to “see” the bones beneath the front structure, slide your finger down the dog’s neck from the occiput to the two bones at the top of the wither. When your finger reaches this point draw an imaginary line perpendicular to the ground. In a correctly built dog the line should run directly down the back of the foreleg. If the line is to the front of the leg, the shoulder is upright.

Rear angulations, should be equally balanced with short couplings and a good turn of stifle. An upright shoulder on a dog gives a long bodyline, sloping top line, sometimes a low tail set and a gay tail, over long back legs with little turn of stifle. This means the dog often crabs when moving as it has to move its front foot out of the way of the rear as it touches the ground. A balanced dog’s hind feet should just about track up. A year or two ago, I watched with interest, at Crufts, a working , Llewellyn, setter, single track at speed, similar to a wolf making long distance travel economical. Food for thought.

Below are diagrams which show clearly the correct and incorrect bone placements and angles.

For the sake of our beautiful breed, please learn to recognise these very serious faults. Judges starting out need to assess far more animals and learn to be ultra critical of their own stock, breeding from only those with correct conformation, otherwise our breed will become much changed and their elegance lost.

The American English Setter has changed so much over the years and we are going the same way. Please don’t let this happen.

As a “watched” breed, entries are often low at open shows and we are tacked on to some gundog judge’s list of extras. They are not breed specialists and heads and coats seem to be their top priority.

The only way to guard our breed’s future is to learn, and be self- critical. Winning is not everything especially when backed by a lack of care for our beautiful breed’s future.

Here are the two photos with the bone structure drawn over which will illustrate the problem.

The black and white photo below shows a dog with the most beautiful head but with a very upright shoulder, sloping top line and very bad, low tail set.

Early in the twentieth century and a little before several of Edward Laverack’s dogs were exported to America where they were crossed with the indigenous dogs used for shooting, to improve the stock. These were of good sound animals proved in the field. However, over the intervening years, it is obvious that not enough attention was paid to the shoulder construction and now the American English Setter seems to be a breed apart. Only the color, Belton, seems to be retained. The overall conformation is much changed.

Every Judge has the ideal of an English Setter in his mind and judges to that format, but all are influenced by that which they constantly see in the show ring and the eye becomes trained accordingly. Please look beyond what you expect to see and analyse the reason for the required structure and frame of the dog and compare it with the 1872 breed standard.

In other parts of the world, Spain, The Netherlands, Ireland, Finland, France, Japan etc the same exportation of dogs occurred however, lately, with new introduction of British stock, the appearance of setter stock is improving.

In my next article I will explain how the difference occurred between the working and show English Setter.