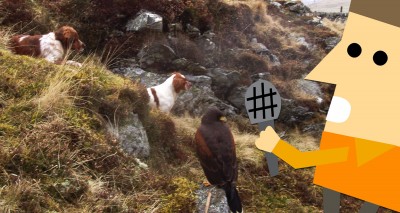 Falconers enjoy the hunting of wild quarry in its natural state and habitat by means of trained birds of prey, but also with the assistance of pointing dogs. Steve Wright has contributed significantly to modern falconry since 1976 when he started with an injured kestrel.

Steve, and his late wife Barbara, got introduced to the Brittany dog breed at Crufts in the early 1980s. Although not actively seeking a hawking dog at the time, the advantages of a pointing dog were obvious. We wanted to ask questions to a different kind of dog breeders, those who breed quality working dogs for a unique and original purpose.

Please introduce us to your own business, Steve Wright Falconry

I am now retired but ran my falconry business for 28 years, doing public displays, having my own centers (1 main one and 2 satellite centers) in tourist venues. I provided tuition and equipment and, in the winter months ran hawking holidays when clients could use my hawks to hunt game with.

Could you also tell us more about your other projects? Independent Bird Register, Falconry Fair, etc.

My other projects (independent Bird Register/Falconry Fair, etc) were all passed on to friends and former employees on my retirement. My only involvement now is as Senior External Verifier for the only recognized falconry qualification in the United Kingdom. My role is to monitor the standards and provision of training and assessment for this diploma course.

How did you fall in love with falcons and birds of prey?

I have always been a “country boy” since childhood. It seemed a natural progression to try falconry.

You have been raised in family breeding dogs, what breed were they working with?

How come you've moved from a dog breeding family to falconry?

Dogs are an essential element of falconry as the bird’s loyalty depends on our ability to produce game for it to chase. Dogs and birds quickly form an unholy alliance and understand each other’s role in the whole operation. The falconer can become pretty much a spectator!

You do breed Brittany dogs right now, how does it compare to your falconry activity? Which one is your heart the most?

I became involved with my Brittanys because I needed pointing dogs to work under my hawks and falcons. I guess I am primarily a dog man at heart as they give so much back. Birds of prey are not social creatures so loyalty, friendship, and generosity are not part of their make-up. Any relationship they have with you is basically exploitative.

Why are falconers using working dogs, what's their purpose? And why are Brittanys better or more suitable than other breeds?

Falconers use a wide range of dogs with their birds. While classically you need a pointing breed (the HPRs are much more versatile in the terrain and cover they can work than the pointers and setters) birds will work over any dog that can flush game out. Spaniels and terriers are fairly commonly used but success depends on the bird being well-placed before the game is flushed. With a pointing breed, you are able to “stage-manage” the situation and place the bird in advance of the flush. Indeed you have the option of flushing it yourself so that you can dictate that the game goes in the best direction to achieve success, whether this is measured by just the game being caught or by the excellence of the chase you have organized.

Being the Chairman of the Brittany Club of Great Britain, could you let us know what are the tasks and responsibilities paired with such an important position?

Being Chairman of a breed club carries the responsibility of seeing that the health and specific talents of the breed are preserved. You have to ensure that the business of the club is conducted in accordance with its rules and constitution as you are answerable to both the Kennel Club and the membership for this. In practical terms, you must chair its committee meetings and AGM. The activities arising from these need to be monitored to ensure they are delivered to the standard needed and on time. It is just like running any business except you are working with volunteers of mixed abilities and skills – so need to make allowance for that. They tend to need a lot of encouragement and praise because they don’t get paid!

What are the genetic diseases potential Brittany owners and breeders should be aware of?

We are fortunate that Brittanys do not have any common congenital diseases. We do screen for hip dysplasia but, although it is present in the breed, their definitive conformation and gait mean that they load most weight on to their front end, so do not have a functional problem with this condition.

What direction would you love the Brittany dog breeding to take in the near and far future, and how can breeders improve the breed?

Our problems stem from the disproportionate influence the show ring has on the breed as, although falconers, in particular, have many working dogs, very few are competed with. This means we could easily lose sight of the working temperament. However, dogs with a high work ethic do not make good pets, leading to rescue and re-homing becoming more frequent. Keeping the breed as a dual-purpose animal may create a potential problem.

Could you explain to our readers what the “Sable Colour” controversy is all about for those who are unfamiliar with the breed? Some breeders in France want the kennel club to outlaw these dogs.

Breeding for tricolour and crossing different colour combinations has “let the genie out of the bottle”. Sable is not associated with any health issues and the advice we have received from geneticists is that there may be other genes, “travelling” on the same locus of DNA, which we do not yet understand. Eliminating sable could lead to these being eradicated as well. Sable is a colour which exists in the Brittany as a dominant version of the recessive (and sought after) tricolour gene. It can exist unnoticed in orange & white or black animals for generations.

As a general principle we have been advised not to do this as any narrowing of a breed’s genetic base (which by definition is already limited) is potentially dangerous. Nowadays, because of the docking ban on dogs in some countries, we are increasingly seeking to breed from animals that carry a gene for natural taillessness, which is in itself semi-lethal.

Breeders can voluntarily now screen for sable so, in Great Britain, we currently see the choice as a personal one. However there are no moves to petition to have sable accepted as a desirable colour in the show ring.

If you had to breed another gun dog breed, which one would it be?

I have no inclination to change breed as it has taken me twenty years to get my head around the Brittany. I am continually fascinated by the brilliance of the genetic engineering that went into creating the breed.

How do you train your dogs, how can you manage so many activities and be there for your beloved Brittany companions? How many do you have currently?

I was a very highly regarded, professional, dog trainer before setting up my falconry business so training them was never an issue. Learning to achieve the correct balance between initiative and obedience, for the individual dog, remains a challenge. I only keep two or three dogs at any one time, preferring to breed my next one as its mother reaches about 5 years old. That way I have an established worker in its prime, a novice and possibly a pensioner. It’s only the youngster that needs much effort and by the time the next one is born I am looking forward to the whole training process again! I am currently on my seventh generation of home-bred Brittanys.

What diet are your working dogs following?

My dogs work hard, particularly in the winter, so I feed them as much as they want. Diet is fresh beef mince and a good quality wholemeal biscuit, supplemented with vegetables and table scraps.

What would you tell those who say dog breeding should cease or become ultra-regulated as there are too many dogs in rescue/rehoming centres?

The responsible breeders are the ones who produce healthy, good-natured dogs. They also are usually careful about who they sell them to and offer a support service for any setbacks the owner experiences. We need to reduce the numerical production of dogs to avoid the re-homing issue. Personally I would like to see a legal requirement for people to buy a quite expensive, dog-owning licence before getting a dog. It would then be an offence to sell to anyone who did not have a license. This would reduce the speculative breeding of dogs and would fund dog wardens and re-homing centres.

How important is it for a breeder to have an online presence nowadays?

Breeders must be accessible to would-be buyers. The more potential buyers you have the more choosey you can be when selling. If individual breeders all had their own sites there would be no need for the generic “findapup.com” type of sites, which are simply internet puppy farms.

What has been your most memorable sale/client?

A sale 2 years ago when the stud dog owner chose to have a pup, for herself to show and work, instead of taking a stud fee. It was an endorsement of the quality of my breeding which has paid off. The little bitch has been placed in all its working tests so far and went Best in Show at our Club Championship Show, her first ever show.

Any advice you would give to newcomers in this industry, who perhaps would like to breed Brittanys?

Brittanys are not a “commercial” breed so I would hope that people want to breed off their own Brittany rather than wanting to get into the breed as a financial venture. Then I would recommend that they get a “guru” who can steer them through their early years. Why learn the hard way when others have already trodden that well-worn path.